Hoping a new post brings fresh ideas. I have a 25 year old Moen positemp bathtub /shower faucet. It's been dripping for years so I finally decided to tackle it. I had waited because there's no shut off valve and I was afraid to shut off the whole house in case I screwed it up. Got my cartridge 1222 from Moen. Couldn't get the old one out so I got the pulling tool from Lowes. I got it out and it came out so hard I fell back, glad the glass door wasn't behind me.

Could not get that darn clip in. Stuffed a paper towel with vinegar in there for about 20 minutes and tried to scrub it with a little brush for straws that I have (not a wire brush) and I did turn the water back on to blast anything out for a few seconds.. Still could not get it in. I even used the tool to shove it in as far as possible. I put the old one in and it almost wouldn't go in, had to use the tool to get it in. Finally, after a wiggle with the tool it snapped into place, figuring that was the trick I tried it with the new one but NO go. I put the old one back in and at least I can turn the house water back on.

I saw a video, probably by a plumber, where they had the perfect round copper brush that they stuck in there...is that my only hope? It doesn't look gunky, but I think there MAY be a little build up around the very perimeter of the pipe in the very back. I don't know what can clean, or if that is the problem. I need 1-2 mm more. Would CLR work better than vinegar? Is paper towel ok? Do I need that stiff wire brush and does HD carry it? I'm so close!! This should have been a 15 minute job, took all afternoon including the soak, trip to Lowes and internet research. Thank you for advice!!!

Yes, I use the provide tool to push the cartridge in. Also some plumbers grease will help it to slide in. 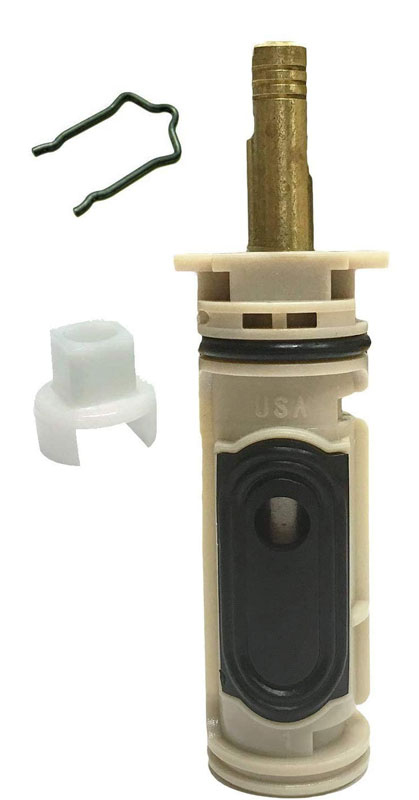 How to replace Moen shower cartridge