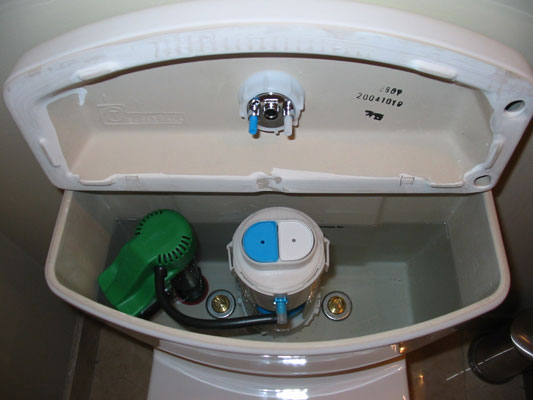 Looking inside the tank of the Toto Aquia CST414M dual flush toilet.

Complete Instructions for the Aquia written by Jamie

Parts for for Aquia

To order in the Seattle area
They look and work great. 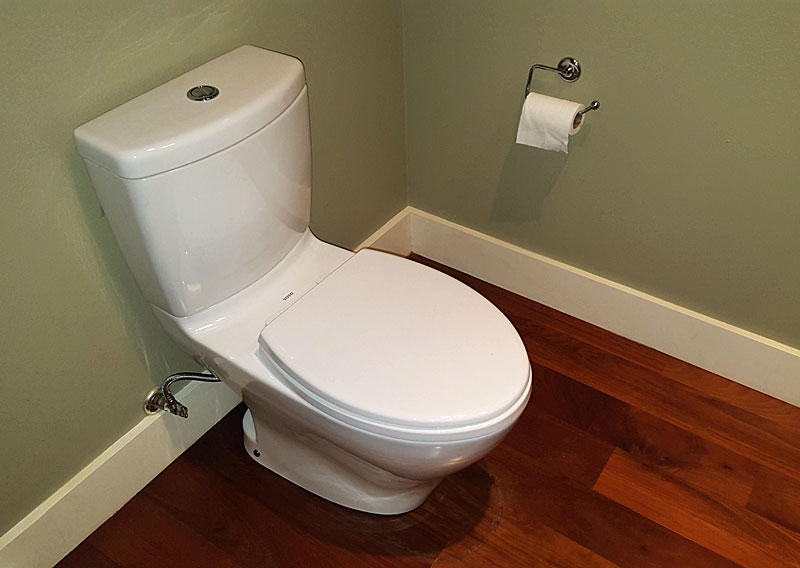 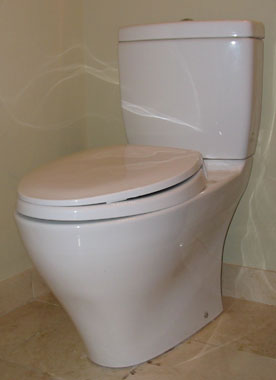 The Aquia meets Ansi/Asme standards as well as the IAPMO/UPC codes.

I saw the photo-where can I find the dimensions? Thanks!! 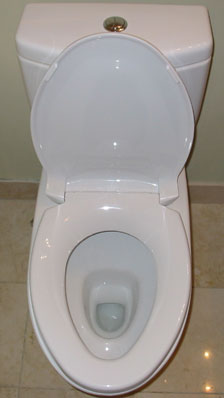 I have had the Aquia installed for about 10 days. It is much better than its Australian counterpart --- cleans the bowl well and flushes great. Even the 1/2 flush flushes a bit of paper. The waterspot is very small...it is, of course, a washdown design. The only disconcerting thing is that the design of the trap is such that you can hear urine running down the drain when urinating, at least in my house.
Last edited by a moderator: Sep 28, 2005

It does use the plastic trapway that is open to the back.

I can see that there will be more noise with it.
However, after looking at it in the showroom, I'm looking forward to selling them.
It looks nicer than the Caroma and it comes in the elongated bowl, which I like.

Teflon tape,
Do you have pictures you can send me of it?
Terry
Last edited: Oct 7, 2005

I now have the Toto Aquia in the Seattle area.
We installed our first one on Thursday November 3rd.
It's a very nice looking dual flush toilet with an enlongated bowl.
Last edited: Jan 19, 2014

Terry said:
It does use the plastic trapway that is open to the back.

I saw this in a showroom and was surprised at just how exposed the plumbing was in the back--too much for my taste. The picture above doesn't really give a good sense of that.
L


Terry said:
It does use the plastic trapway that is open to the back.

I can see that there will be more noise with it.
However, after looking at it in the showroom, I'm looking forward to selling them.
It looks nicer than the Caroma and it comes in the elongated bowl, which I like.

We're considering this toilet (and the Caroma) for a bath remodel, and we have small children in the house. I haven't seen this toilet locally yet (I'm in a fairly isolated area in CA), so any way someone could post pictures of the plastic trapway open to the back?

In one picture it looks installed very close to the wall -- 3 - 4" maybe? So you wouldn't really see the trapway unless you were on the floor, wedged behind the toilet? Enquiring minds....

Could you possibly retrofit it with insulation? Does the trapway need to be exposed? If we insulate the wall behind the toilet well, I'd assume that would eliminate some of the noise -- at least to other rooms.

Also, Terry, what about it "looks nicer" than the Caroma -- would you be able to be more specific on that point? ie. Modern, stable, cleaner lines, durable?

We're specifically interested in a DF model, and have all but eliminated the Sterling (Kohler) Carsten model http://sterlingplumbing.com/onlinecatalog/color_price.jsp?rescom=professional&item=4386903
based on the MaP testing, and various comments gathered from your site. Even though initially, I really liked the looks of that toilet design. I suspect I'd be falling into the homeowner trap of choosing form over function -- not a good option for a critical fixture such as a toilet.

Most of the unifit Toto's (if not all) are open to the rear. Unless you use a mirror, you can't see into the back (well maybe if you are a wet noodle). The skirt basically blocks any view of the insides from the back. I don't see the problem...

I just bought a used home. I had three toilets to replace the same day I moved in. I just had to get rid of the old stuff.

I just installed the Toto Aquia in my main bathroom.
It looks great and flushes very well.
It looks so nice, it's almost like the bathroom has been remodeled.

The downstairs bathroom now has the CEFIONTECT Ultramax.

The third bathroom gives me some room to do some testing with.
That will be the room where new products will move through pretty quckly.
Last edited: Oct 13, 2006
J

I've had the Aquia installed for several months now, and I still catch myself admiring it when I walk by. Many of my guests also comment on how it's like the modern toilets they commonly see in europe. The thing about the waterspot is this - the toilet is pretty much designed around it. In other words, solids tend to drop straight down into it, avoiding the contact and staining that would result in other toilets. And of course, whenever you would normally need a courtesy flush, you would probably need one with the Aquia as well, so this should cut down on the excessive stinkiness you are afraid of. I've also noticed that any stains that do show up usually get washed away during the refill. If not, a second flush almost always cures it. Overall, I am extremely pleased with this model.

Thanks for the reply. I guess we were scared to use it for a while because I was the one that installed it and we wanted to make really really really sure it was done right and would not leak.
I do think that folks who sell this unit should strongly warn/caution potential owners about the water spot size. I bought mine from a real lumber yard with a real plumbing showroom from the manager of the showroom. They sell so many of these toilets that they had a ton of them in stock-yet not a peep from him about the toilets unusual characteristics. If he just would of warned me that the small water spot size was normal and yes it does work great that would of killed all my fears right there (well most of them).
L

Funny story about small water spots... (not too gross)

My sister-in-law was visiting the US for the first time from Australia. All the toilets "back home" have small water spots, typically a dual flush design (they've been very concerned about water conservation for many years, so it's been a common feature for the past 20 years in Australia).

So, my sister in law gets to the US at LAX, and has to stop an use the toilet. Goes in, and it looks to her like the first bowl is flooded -- the water is *way* up from where she's used to seeing it. Second bowl, same way. She checks every stall, then runs to the nearest Airport personel, yelling about the state of their bathrooms, and how every toilet is backed up. She's absolutely freaked out about how much water is in every toilet. Only when the poor airport person goes into the toilet with her, flushes it in demonstration does she calm down.

That was 3 or 4 years ago, and she still tells this story about the toilets in America.

The relevance to this thread is that you'll probably get used to it, and then regular toilets will start to look flooded to you!

-- Planning to install 3 new Aquia in my house in the next few months. Thanks to all the great information in these forums.

Yea we are used to it now. I especially like the soft close lid. I thought it was just an expensive gimic but now I like it.
Similar story to yours. A good friends FIL who is from Italy is visiting right now. First time he used their standard toilet he was shocked at how much water was in there and upset that there was a lot of 'splash back' when he was using it...

The installation of the 2 Acquias I bought was a lot more difficult than expected. Luckily for me, they were installed on the 2nd floor, so even though some more holes had to be drilled in the floor tile in one bathroom, there wasn't a slab underneath -- that would have required some serious drilling! We had a height limitation of 30" under a shelf that is an extension of our vanity top in our powder room (which is on slab), so we ought an Ultramax elongated for there. That installed in no time flat. Beware that the Acquia needs 6 holes in the floor to install!!

Oftentimes, drilling into concrete is much easier than through tile...and, with Toto's, that model, and any with the unifit adapter require additional holes in the floor to install.

Hi Terry, is it possible to use the Aquia as a back outlet toilet?

We had an Acquia installed last month as part of a total bathroom remodel.
We had a plumber do the installation, so I can't really address the ease of installation issue -- but we love the toilet. I know that sounds weird. But the thing it replaced sometimes needed to be flushed a couple of times even for #1, and the Acquia handles whatever we put into it with style and aplomb.

I really like the skirt; it just looks so much cleaner. I was worried about the small water spot, and the fact that some other folks had complained (either here or at another site) about smearing, but we've had no problems. The small flush setting is very complete, and the big flush setting even more so.

One thing I haven't seen mentioned is how comfy the soft-close seat is. Again, this sounds a little weird, but the seat is shaped really well to fit my tush.

I would agree with your comments on the looks and comfort of the Aquia toilet. We have had one in the hall bath for about ten months. My old American Standard would get clogged at least once a week, but since we changed to the Toto it hasn't clogged at all. I plan on changing my other 3 toilets to the Toto brand. I picked the Toto brand from recommendations on this website. Thanks Terry! 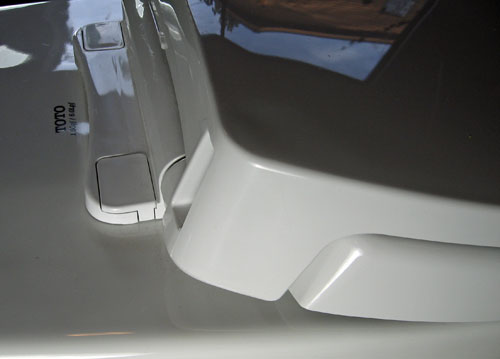 I need to replace the flush valve on our TOTO CST416M Aquia II Toilet. The supply line is not acces

What does Toto mean by "Ultra-low high efficiency toilets"?