I need help with my still project

Howdy Yawl,
I had ar buddy Southern Man help me out wit bildin a new still cuz az u no hez an en-gin-ear. My ol one maid sum o the best corn licker that ever come outa Caldwell County, North Carolina but itz capacity wuz just to darn low. I had two many customers wit emty bottlz an not enouh corn licker to fill all the jugz.

Anywaz I invezded my hole life savinz in this new still and the corn squeezins ta get thiz inta full producin. Southern Man said, Thiz new still would kick out more licker than ol #7 up at Jack Daniels plase. Anywaiz I can't git Southern Man to help me cuz hez busy diggin a new pit fer hiz out house after I stopped by an plugged up hiz toilet yezturday. The problem Im havin iz the new still ain't putin out good licker. The firzd batch come out and my third best dawg took a swalla an went blind. My firzd an secund best dawgs was killed the other day whin the stoop Southern Man helpt me bild collapsed on them. thaz y the third best dawg was testin the licker for me.

Anywaz I'm purty sure tha problem iz that the new still heets two quik so I needz to have it come up ta tempachur slower. Se win yer heatin the mash the foreshotz come offa the still first that stuff is poizun itl make ya go blind. Ya gitz stuff like Azitone at 134F, Methanolz at 147F, an Ethel aztate at 171F, sew ya gotta heet slow and uze thiz stuff ta run the pick up truck. The good licker starts commin off at 172F - 180F an ya can't let it go over 201F or it starz tastin real bad.

Any waiz the tempachur shoots up so fast i'm gittin the poizun mixd wit the good stuff an thaz why my thurd bez dawg iz blind. Pulez help me git thiz still under control I can't have cusdomers going blind or have bad tastin corn licker. I got all my money tyd up in thiz workin rite.

Herz a ptchur of my still if that hepz at all. Thankz Ya Awl! 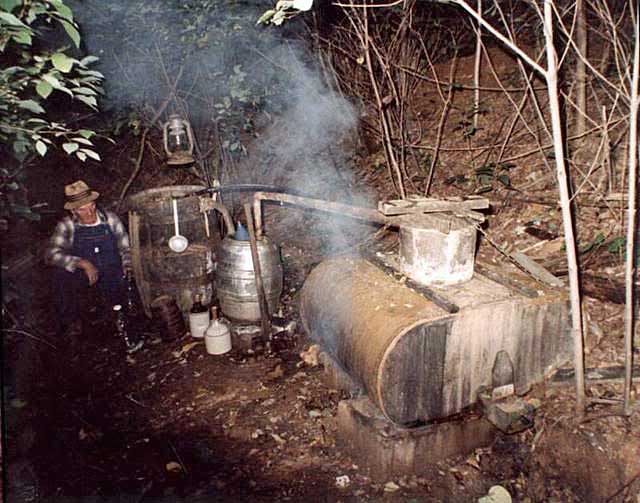 I have a few concerns with the design. The boiler should be a Pressure Vessel. An Oil Tank has no pressure rating that I know of.

An engineer like Southern Man Should know better than this!

I really don't like the look of that.
Are you sure that conglomerations of tanks and pipes is safe?

Sorry to hear about your dawgs. Hey listen, a buddy of mine headed east over the mountain a while back and settled down in Hickory after gettin' job at the brewery there. You want me to see if he can come up and help you get that still a runnin' right? I'd offer to do it myself, but we ain't had no whiskey makers in my family since WWII.

Redwood said:
I have a few concerns with the design. The boiler should be a Pressure Vessel. An Oil Tank has no pressure rating that I know of.

Yup, I wuz a bit worried bout that myself,
Wen I wuz a young lad my daddy's still blewed up an I rimembr him been hurt reel bad.

I'm a bit worried bout this pro jeck cause I'm beeginin to have douts as to Southern Mans competance as an en-gin-ear.
The stoop fallin on my dawgs n all.
Last edited by a moderator: Nov 16, 2008

Obama the Plumber said:
I really don't like the look of that.
Are you sure that conglomerations of tanks and pipes is safe?
Click to expand...

No I'm not to sure.
Like I said up higher I'm not sew shur Southern Man is the sharpest tack in the drawr.

Sorry to hear about your dawgs. Hey listen, a buddy of mine headed east over the mountain a while back and settled down in Hickory after gettin' job at the brewery there. You want me to see if he can come up and help you get that still a runnin' right? I'd offer to do it myself, but we ain't had no whiskey makers in my family since WWII.

Normally I'm pretty concerned bout strangers comin round my still.
I don't want no Revenewers sniffin around meetin the end o my scatter gun.
But Jr. if yur vochin for him I'd be glad ta av im come by.

Do ya awl suppose is I made the fire box smaller she'd work better?

It's gonna go boooooom if he didn't call a pro!

I'm so sorry Mister Rugged,
He toll me that he wuz byin a bran new oyl tank.
It didn't look tu nu doe...
da furst batch did kinda have an stink like dinasoar squeezins tu.

Hillbilly man you could try building a smaller fire under it.
What kind of pressure does this thing have?
Does it have a gauge?

Ah hi Mister Redwood.
She don't have no preshure gadge. All she has is a thermomenter.
Ah doezn't no what preshure it has but sometimez stills do blow up.

Why would you want a gauge on it?
Isn't this just for making moonshine?
I don't have a plumbing license, but isn't it just common sense that if it holds water that it must be made for that, and what in heck are you worried about, it's not like it's going to the moon.
It looks pretty well engineered to me. I bet it's even over engineered by a factor of six.
But my question is, can you make pancakes on it?
I'm getting hungry just thinking of pancakes with maple syrup.
Do they have syrup trees near that still?

Ah Don't no but they says we pappy's still blew she mite have made it to the moon. I'm glad ya think ma still is a good one. I'm gonna try Mister Redwoods suggestion to build a smaller fire an see if I can get a good batch off.

I could make pan cakes on the fire in a skillit but no I don't have maple serup.
Iz got some hillbilly cuzins thet live in Vermont wich is the only yankee state I nose of where hillbilly's live. They make maple serup up there... Az far az I nose it's a yankee thing.

Many thanks to Mister Redwood!

I've finally cooked of abatch that seems to be alrite.
My 4th best dawg is layin on his back n can't stand up but he dint go blind.
hez still lookin round all glassy eyed...

I been lookin at other threads here an wonderz if perhaps I could rig a tankless water heater ta do the job an increaz production.
What ya awl think o that!

Yessuh,
I started thinking with a tankless like a Rinnai R98i ASME I could make shine right in my cella an not av ta hang out in the woods. In the winter its cold n in the summer therz bugz.. I woodn't mind doin it in my cella.

Whatcha all think o that!

Hillbilly man I really don't think that is a good application for a tankless water heater!

Hot dam hillbillyman! I havn't had this much intrtainment since last time i seen dat movie "water boy"!
You must log in or register to reply here.

Water heater broke. Need help on how to properly connect flex hoses/water lines so I can use water i

Someone stole my pump. I need some help please...