I have a plumbing code question that I am having a difference on opinion on with my local building department. One inspector signed off on this arrangement and then another later on has told me that it is not code compliant They are not going to make me change it, but we have continued to debate the legality of it.
I have a basement plumbing arrangement almost exactly like the one shown below except that it is under a slab and it discharges straight into a sump basin in the basement about 25' away. The 3" closet vent will have a clean out and then reduce to a 2" individual vent.
The inspector says that it does not meet code in California because the clean out does not come at the uppermost terminal of the building drain.
I contend that the everything from the vent/clean out combination back is a branch line and that as long as it is shorter than 5' than this arrangement is code compliant. I base this on if I had simply wye'd off before the vent creating a branch than it would have been compliant, which seems like the exact same arrangement that I have now.
You guys are much smarter than me on plumbing codes, so does anyone have an answer to who is correct.
Thanks. 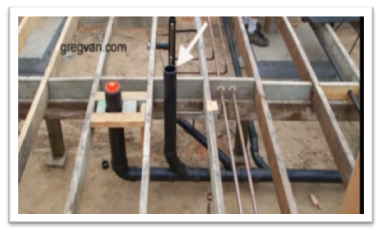 I would have put the cleanout on the 3" portion of the vent. So yes, the first inspector said that it was okay, and then the second one had an issue with it? I would talk to the first guy again. It looks good to me.

Building Drain: That part of the lowest piping of a drainage system that receives the discharge from soil, waste, and other drainage pipes inside the walls of the building and conveys it to the buildings sewer beginning 2 feet outside the building wall.

You stated that the bathroom piping goes twenty five feet and discharges into a sump basin. That means that the sanitary plumbing in your photo is defined as the “Building Subdrain”, which is then pumped up into the “Building Drain.”

The second inspector is being petty and to literal with the California Code.

707.4 Location. Each horizontal drainage pipe shall be provided with a cleanout at its upper terminal...

Honestly, your installation looks great. That’s a perfect spot for your C.O. Your first inspector interprets the code and applies it to the real world, and understands mechanics, the second inspector drinks alone.

I agree and thanks for the comments.

If inspector #2 wants to wordsmith, you should refer to the code book.

CA Plumbing Code: Chapter 2, Definitions, Trap Arm. That portion of a fixture drain between a trap and the vent.

By placing your C.O. where you did, you have met the letter of the code exactly as it was ment to be interpreted. At the end of the horizontal “drainage pipe.”

Your code compliance has nothing to do with the 5 foot rule.

Not sure where your clean out is. Would respectfully question the 90 at the bottom of the pipe with the red dot on top. Looks like a vent 90. Thought that should be a long sweep.

MKS said:
Not sure where your clean out is. Would respectfully question the 90 at the bottom of the pipe with the red dot on top. Looks like a vent 90.
Click to expand...

I think you nailed it Cool Blue. Thanks
You must log in or register to reply here.

Rough Plumbing inspection IPC am I missing anything?

Back to Back Sink Plumbing/Venting Help