My current American Standard toilet, a Yorkville, model number 4049-77 ,was installed in 1975. Works well, but it has started to leak around the bottom. The waste empties to the back. Normal flush, no power assisted. I have not yet removed it. I assume the seal between the toilet and waste pipe has worn out.

1) I have been told I need a 4" diameter neoprene seal between the toilet and the waste pipe. Would you agree with that ?

2) How does the flange of the pipe attach to the toilet ? There are two nuts attaching the toilet to the wall, but they seem to be well away from the waste pipe and the flange.

3) What kind of glue do I need to attach the seal to the toilet ? Do I also put glue onto the flange ?

Any advice would be appreciated.

It sounds like you are describing a wall-mount toilet.
The two nuts are what secure it to the flange. Disconnect water supply and when you begin to loosen the two nuts make certain you have a good grip on the toilet because it can slip off. You need a wall-mount flange seal such as this:

Make certain both surfaces are clean, I sometimes use a light coat of silicone just to hold the gasket in place (sometimes they like to fall exaclty when you go to set toilet, very irritating); when reinstalling nuts be cautious to not overtighten. It is better to be a little too loose and have to tighten a little more than too overtighten and have to buy a new toilet.

I know some plumbers that use a standard wax seal and say they have no issues with them but i personally have not.

The gravity Yorkville, floor mount, rear outlet can use a wax ring made for a back outlet. 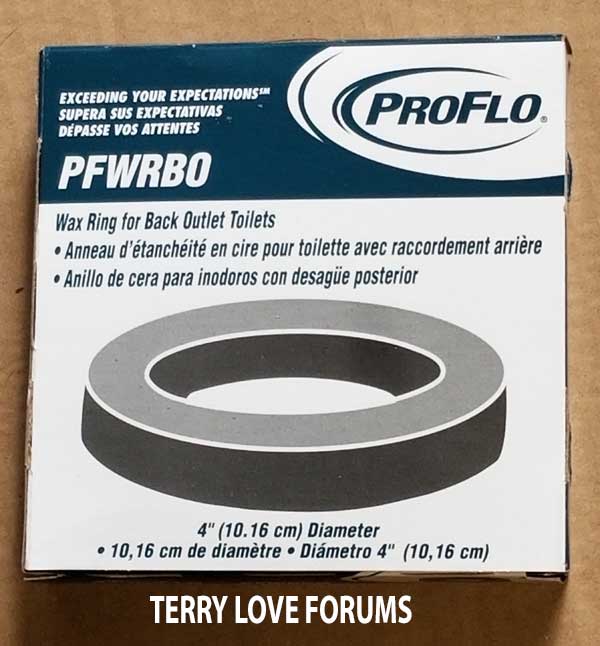 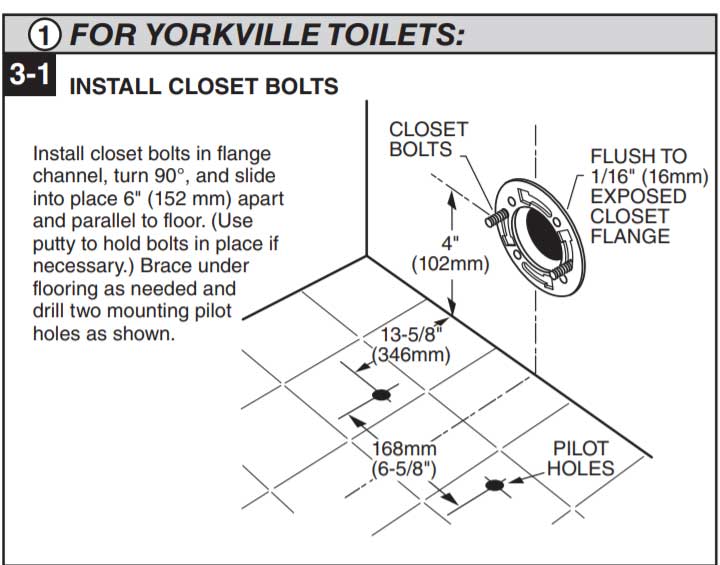 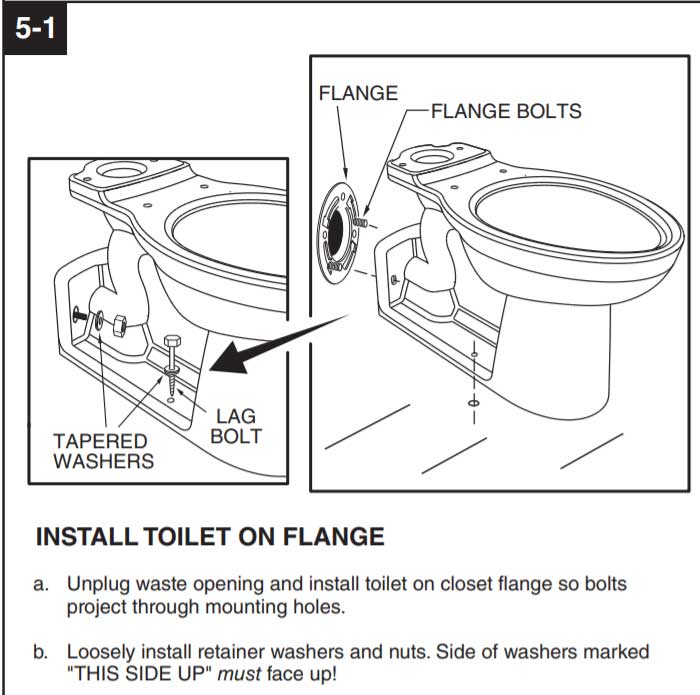 After doing lots of Internet reading, it seems that back outlet toilets are best done with a neoprene or graphite felt seal. I couldn't find either of those seals anywhere at any of the Plumbing stores in Ottawa. So I have ordered one online. Won't be here for 2-3 weeks. It is sticky both sides. You just pull off the thin plastic cover. Cost $45. No problem, I'd rather do the job right.

However, I have other concerns.

1) My floor mount, back outlet Yorkville has two bolts sticking out from the wall. They are low down, about 10"-12" apart. Do these come from the pipe holding structure ? If so what is holding the waste pipe close to the back of the toilet ?

2) Assuming we can pull the toilet from the wall, what are we going to see ? What will need to be done ?

I had the same problem as you previously in Ottawa.

I used a reinforced wax ring from home depot and it has been fine for the past 4 years.

I tried all sorts of neoprene rings but they seemed to get waterlogged and seep after a while. I think the issue was that the old cast iron flange had virtually no flat surface area to press against the neoprene.

Thanks for response. Interesting about neoprene rings. Well, I guess I'll find out ! I put one in yesterday. Silicon caulking on both sides before I pushed toilet to wall. Looks good and I have a good flat flange.

The previous installation was with a normal wax ring. I think a problem was that the base of the toilet had not been bolted down well. No washers !! So it slightly rocked when I sat on it !

I had a plumber come after I had taken off the tank and unbolted everything. He just came casually pulled the toilet from the wall, removed the sad looking wax ring, plunked on the neoprene ring I had bought ($35 !), and pushed it back to the wall. No cleaning of floor, no sealing of ring. I said I could do the rest and liked doing it. And explained I'd only hired him because I was unsure what might happen when I pulled the toilet from the wall. (Nothing did !) And got rid of him. Disgusting, sloppy workmanship. And he charged me $146.

After he had left, I undid what he had done, and pulled the toilet off the wall. Cleaned the floor, cleaned the back of the toilet where the ring went, caulked the ring on one side, stuck it on the back of the toilet. Turned the toilet so it was resting on the ring. Left it for about 4 hours. Came back, scraped the flange, used a wire brush in a drill to clean it off, and caulked the outside side of the ring. Then pushed toilet to wall. Used plastic and brass washers to tighten the two bolts. Tightening them alternately. I'd lightly put screwdrivers in the floor holes so they went into the rawlplugs on the floor. This made sure I'd be able to put in the bolts later. After I'd screwed the back bolts into what I thought was a reasonable tightness , I put rubber and brass washers on floor bolts. Bolted it down.

I'll test it without tank later this afternoon. This is what I call doing a decent job !
You must log in or register to reply here.

How to rough this wall hung toilet in attic?

Do I need to lower my Toilet Flange? Toto resting on the flange
2

Is there a reinforced PVC toilet flange?

Need to lower toilet flange Which Reamer is best?
2