Questions about swapping out a Sloan Flushmate for a regular toilet

Hello everyone
This is my first time posting ... apologies in advance for using the wrong terms and probably some dumb questions.

The previous owner in our house installed a Sloan Flushmate toilet. It works great but it sounds like a jet taking off when flushed in the middle of the night so we want to change it out for a standard toilet.

Our house is a smaller 1920's colonial with 3 bed/1 1/2 Bath. This bathroom is the only one on the second floor and is located at the back, center of the house - between two stacks (vents?) based on what I see coming out of the roof, which join up to the main drain in the basement.

I don't think there is any specific reason, such as distance from the stack, as to why this was installed so I am hoping that this is a relatively easy swap out. Although I have not installed a toilet before I am fairly handy and not afraid to get stuck in ....famous last words.

- Looking at the photos and the various measurements, does anything jump out at you that looks unusual?

- Do you have any recommendations for what brand of toilet to buy. I started looking at reviews on line and am more confused now. Is there one that those in the trades recommend more often than not?

- Might this Flushmate toilet be useful to hold on to for when I finally get around to adding a toilet to the basement? I will need to break up the slab to tie into the underground sewer line. I was wondering if the extra 'whoosh' in this one might be a benefit in that location, and where noise would not be an issue. I will be using a plumber for the basement work.

Thanks for any input 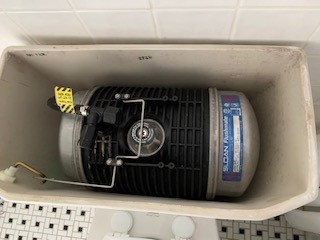 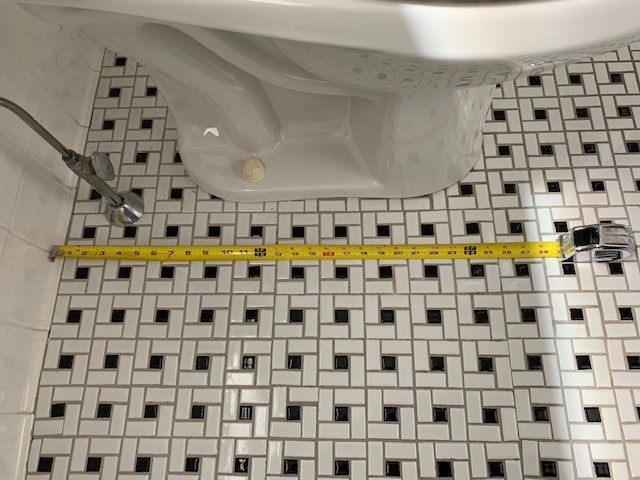 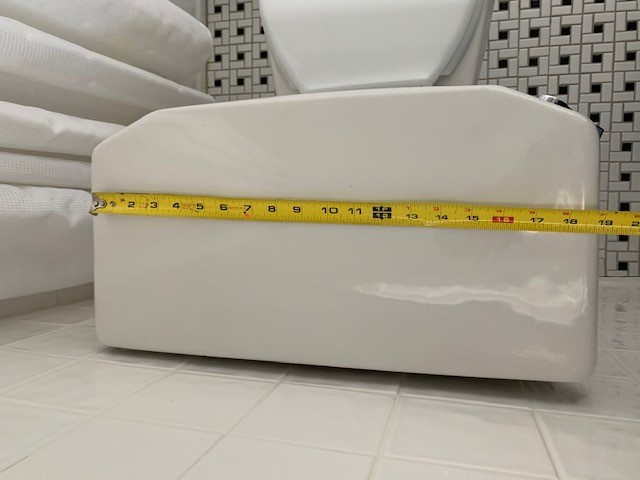 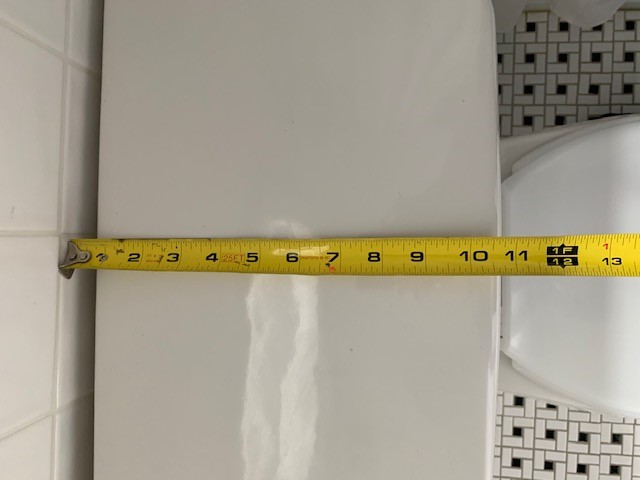 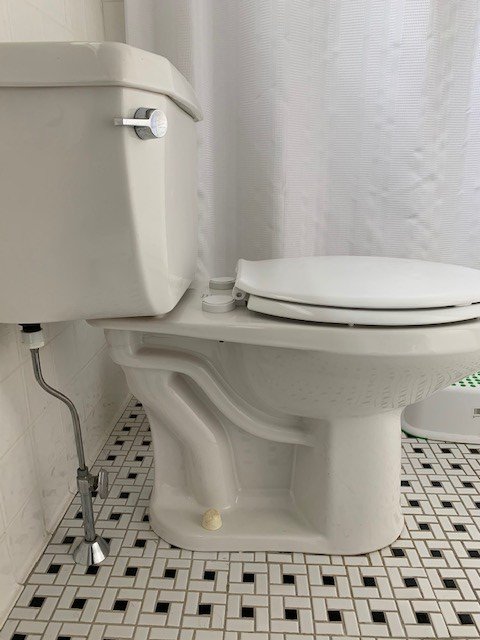 It looks like you have a bit over 11" to the hold-down bolts...you want to take the caps off and measure a bit more carefully. Toilets are made for either 10, 12 (the 'normal') or 14" rough-ins. Most toilets have some space behind them when the rough-ins are perfect, but there's no standard...just that if the rough-in is perfect, they will fit. You can fudge the position on the flange slightly, maybe up to 3/8", but 1/4" is almost a certainty, as the outlet horn of the toilet is usually in the order of 2-1/4" or so, and can be offset slightly and still fit and point straight down. Having the supply in the floor will limits some toilets, especially some that have a skirt, for clearance, so measuring carefully is required should you go that route (measure from the toilet's centerline).

If the drains are installed per code, a pressure assisted toilet doesn't really buy you much of anything except more expense and noise. If you have large, hard stools, the extra pressure can break some of them apart (but it can also shred paper and leave bits in the bowl!), but that's not a common thing.

You will want to pull the toilet and see if they left any voids in the tile underneath to ensure that the new toilet's foot print will cover any voids. Ideally, they tiled under the lip of the flange, but who knows.

Some toilets run the waste almost horizontal along the bottom of the toilet and then try to make a sharp right-angle bend to get it down the drain. That does two things, slows the flow down, and is a potential clog point. I much prefer a nice smooth curve that points it down out of the toilet rather than an abrupt one.

Personally, I've had good luck with Toto toilets, the largest toilet company in the world. They do have a factory in Georgia, but depending on where you live, it may come from a factory outside of the USA. From Terry's experience he has passed on to the forum, he Toto has the lowest defect rate of any of those he sells. Some of a toilet is looks, but I care more about how they work...looks are important, but a great looking toilet that doesn't work is just a waste of money!

Something along the same style as you have would be maybe the Toto Drake. Don't go by the list prices on their website, as you can get it for less. You can view Terry's prices, but unless you live near him, he won't sell you one...shipping individual toilets tends to end up with broken bits, and nobody is pleased, so he stopped selling and shipping them. They generally come fine in bulk on a pallet, but not when handled by UPS or FEDEX individually.

Thanks Jim for the detailed response - very helpful. I'm not too far from you, just a few miles west of Boston.

I pulled the caps and the distance from the wall to the center of the bolts is spot on at 11 3/4 on one side and a little over 11 1/2 on the other. Of course it would be on the line!! If you look at the third pic above you can see how the tank isn't directly level at the back. Sounds like 10" would be the safe bet but a standard 12" might (?) work. I could try the 12" and see how that goes. Can an unused toilet be returned to a big box store, if I did a dry fit? I'm guessing not but can give them a call.

Thanks for the Toto Drake rec. I found a whole thread on it on the subforum so I have some reading to do. I'm all about the function but the home boss will undoubtedly have some input.

Good point on the tile - lets hope they ran it all the way. I'm ok with some tiling - previous owner left a few tiles behind thankfully.

Bumping this thread as I'm in the exact same position, looking to replace two Flushmate toilets with conventional gravity-fed fixtures. Hold-down fittings are standard 12" from the wall. Any brand/model suggestions?

As I said earlier, I've had good luck with Totos. I put a couple in my mother's house, and they were reliable. I have two in my condo and they are as well. While Toto has factories all across the world, many (not all) of those sold in the USA are made in their factory in Georgia. Unless you have a medical issue with extremely long-hard stools, Toto toilets are quality. Lots of styles, and a huge range of prices (don't go by their suggested list prices!) from a few hundred to many thousands. The less expensive ones function as well as the others, but some of them just have a lot of neat bells and whistles, like odor filters, auto opening and closing seats, bidet, etc....that you don't need, but could be nice if you wanted to pamper yourself, or show off to your guests!

Under some circumstances, a pressure-assisted toilet might solve some problems, but for the vast majority of people, a quality, standard flush toilet works just as well, and won't typically wake you in the middle of the night.

Hello,
It always bugs me when folks give advice and then people never report back to say how it went, so here I am ........ a year later before I finally got around to it!!

I changed out the flushmate for a Toto eco ultramax - wanted a one-piece with standard height Vs ADA/chair/comfort height for the shorter folks in the house and this one fit the bill.
Model #: MS854114EG-01
https://www.totousa.com/filemanager.../SpecSheet/SS-00206_MS854114E_G_MS853113E.pdf

My first time changing out a toilet and all went well. The flange and subfloor were in good condition, no leaks, level etc., so the previous trades made my job easier. Tried the danco perfct seal first and had a bit of toilet wobble - slightly elevated flange. Pulled it off and used a standard wax ring and all good.

Was a bit worried because the distance from the wall to the center of the bolts was 11 3/4 on one side and a little over 11 1/2 on the other but I was still able to center the toilet over the flange with a little bit of room to spare as you can see in the pic. Toilet isn't really as squat/short as it looks in the pic - probably my camera skills. 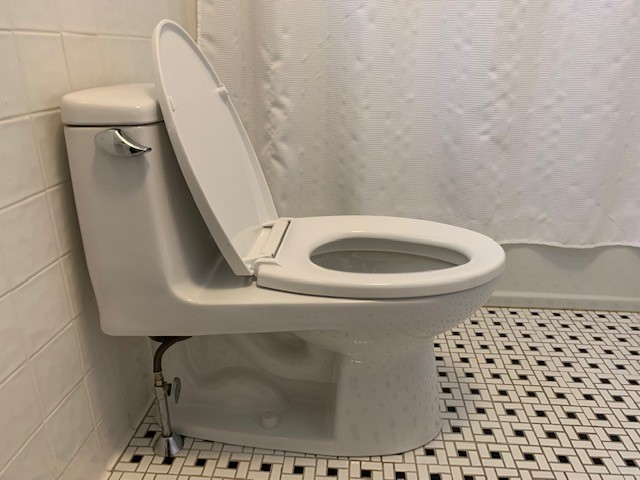 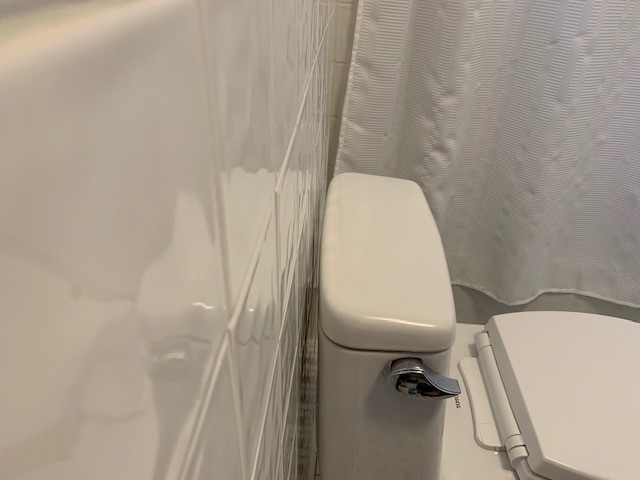 JohnBoston said:
Hello,
It always bugs me when folks give advice and then people never report back to say how it went, so here I am ........ a year later before I finally got around to it!!
Click to expand...