I'm not gonna do this myself, but before I engage a plumber, I want to know the direction I'm headed in.

Toilet is an American Standard Yorkville 3701.016 (same spec sheet as the 2876.016, it looks like). It's a discontinued model, but replacing the toilet is not a good option, because the tile baseboard was cut to fit the annoying back wallmount "cover" you can see in that spec sheet I linked to.

The tank is model 4142, and both it and the bowl say they are 6.0 Lpf/1.6 gpf capacity. It currently has a WDI EcoFlush B8104 pressure-assist pump -- which is the 1.1 gpf capacity model. That pump case now has a hairline crack in it that sprays water (inside the tank...if the lid is left on) once it's refilled, which lowers the pressure below the ability to flush, and needs to be replaced.

Since the American Standard tank and bowl say they're rated for 1.6 gpf, and assuming no other weirdness here, we should be able to replace the 1.1 gpf EcoFlush with a 1.6 gpf Flushmate M-101526-F31k ... right?

It seems to me like they could have even put in the B8106 (1.6 gpf) EcoFlush originally, but didn't to sell it as more water-saving, or something. I just want to confirm this seems like a logical change-out to people who know plumbing and toilet installations in particular, and there isn't some weird "1.6 gpf equals 1.1 gpf in pressure toilets" conversion that I don't know or wouldn't understand. Like in the way I don't understand how to use the convection setting on my oven correctly, but that's a whole other thread for another time somewhere.
Last edited by a moderator: Sep 27, 2021

I sold the ecoflush for only six months. They all started failing on me. I no longer sell them.
https://terrylove.com/forums/index....ded-toilet-gerber-df-21-318-a-big-flop.30226/

The Flushmate which is made in Detroit, MI is a much better product. Since your ecoflush has failed you too, it's time to replace the pressure tank with Flushmate. You can order direct from them.

Candidly, I don't know why that 1.1 Ecoflush is in there. I take it that you didn't purchase the original toilet. I would have thought that the original toilet came with the Flushmate, because it is a 1.6 on the spec sheet and labelled as such, and you now for some reason have a 1.1. Maybe someone was persuaded to install the WDI garbage in order to save water. (Or maybe it came with a 1.6 Ecoflush originally, and when it virtually-immediately broke, as they tended to do, maybe someone replaced it with a 1.1 Ecoflush.) I guess the "why" doesn't matter, but it is interesting.

Bottom line is that you want the M-101526-F31, because that's the right unit for an AS 1.6gpf. The question is whether you want the -F31K (the "k" is for "kit") which is the M-101526-F31 unit plus some extra gaskets and a new flush handle, which are necessary for replacing an Ecoflush. Maybe you need those, maybe you don't, depending on how and if the original toilet was modified. It's like $30 more, which isn't an insignificant amount of money. Me, I would spend it so I wasn't standing there with a plumber who needed more parts before he could complete the install -- or complete it correctly -- which would have then to be ordered... But that just comes from that sinking feeling I get when I have to run to the supply house or hardware store to get some part in the middle of a project.

Thinking it through, and given that you don't know what was originally in there (e.g. Flushmate or EcoFlush and what changes to gaskets or flush handle were made), I would get the kit.

So bottom line, yes, you've got the right part number.

You can go to the Flushmate site and buy it directly, although NY Replacement Parts does seem to sell it a bit cheaper, with free shipping. They are a service of a well-known plumbing supply house in East Harlem, and I have ordered parts from their local store before, as does my 500-unit apartment building. They have a lot of stuff for the remaining old American Standard toilets we have in the building (which get replaced with Totos and Gerbers whenever the apartments turn over). They're actually generally not the cheapest, at least on the old AS stuff, but they are reliable and usually have it in stock.
Last edited: Oct 6, 2017

Which now explains to me why this page is set up the way it is, with the 3 EcoFlush models over the F3H1K picture and replacement listing:

Next step is showing all this to the plumber, who's supposed to call me end of today to come by to look. If he says he's up to it, I'll order the thing from NYRP to pick up at the local store (since I see they have one literally in my ZIP code ☺︎).

Thanks again for the insights!

Unfortunately, I don't know any plumbers in Yonkers. This isn't a difficult project; it's something a good DIY-er could do. The toughest part is going to be taking the tank off the bowl so he can unscrew the big nut under the tank, because by now everything may be rusted together (or maybe not). Everything else is easy.

Caveat (and I say this with all due respect): Plumbers as a rule do not read instructions, even if they've never done something before. So YOU need to read the instructions, which are probably available on the web. Then you can politely discuss anything weird with him, like "I thought it was so interesting that the nut is supposed to go outside the tank" or whatever seems like it wouldn't be completely-intuitive to your guy. But don't hover over him double-checking unless you hear loud banging and cursing from the room.

If you're lucky, he has done one of these before. Seriously, it's nothing that requires any real level of skill (like bending pipe or braising something, etc., -- things that a good plumber finds easy that a civilian wouldn't). It's a straightforward install of parts into the tank and making sure they work mechanically once installed.

Let us know how it goes! And include a couple of photos if you like!

I had the American Standard Cadet Flowise Pressure Assist 2462.100.020 with the EcoFlush B1804 1.1 GPF pressure tank and had replaced with a Flushmate 503 Series M-101526-F3H1K 1.28 GPF three months ago due to problems on EcoFlush with Upper Supply failures and other flaws. 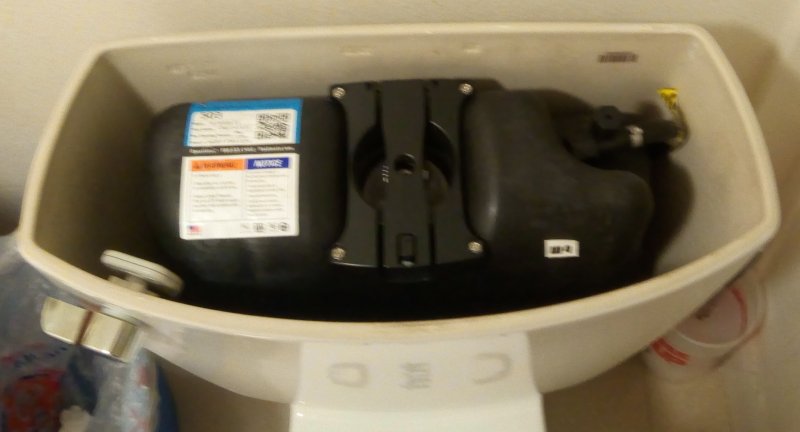 Given the context and utility of old threads, I hope it is ok to revive threads like this.

I've had the WDI for about 7 years and it's been... ok. Every couple of years for a few months it develops a tendency to partially flush and also hiss. My toilet is floor-mounted with a rear outlet so I believe I'm forced to use a pressure assist.

Looking at my Ecoflush again, and it may have always been this way but I'm only noticing it, there's a layer of water at the cartridge. That seems unexpected? Maybe it's expected. I suspect the resolution is to replace the cartridge, which appears to be dead simple.

Or it appears the consensus on this site is to replace it with the Flushmate (which seems to have had recall issues of their own, including the requisite fear-inducing exploding videos?). Is that an easy install? I just turn off the water, flush, and the danger is gone, and I just "pop" off the giant porcelain tank so I can reach the nut? It's gotta really be worth it over just replacing the cartridge. The cost of replacing the tank is, in terms of plumbing costs, not a lot more, particularly if it is more reliable.

corsair said:
I've had the WDI for about 7 years and it's been... ok. Every couple of years for a few months it develops a tendency to partially flush and also hiss. My toilet is floor-mounted with a rear outlet so I believe I'm forced to use a pressure assist.
Click to expand...

Yes, the bowl you have requires a pressure assist tank. Sometimes it's easier to just replace the entire tank while you are at it.
The 28-380 comes with the 1.6 Flushmate, which I sell in the Seattle area.

I forgot that I wrote this, I found this thread again via a google search I would have ordered from you but didn't realize you sold components, I would have purchased from you. Next time.

My Ecoflush developed a leak around the hoses recently and then pinholes in the tank began spouting out water. Seemed like it was time to replace it.

In case someone is searching and trying to find the component for the 28-380 bowl and Ecoflush B8104 but with Flushmate:

Despite Flushmate's website very clearly indicating that the B8104 replacement is kit Kit # M-101526-F3H1K, their customer service via email says I need the M-101526-F31K. I mistakenly purchased the former and then got the latter so had a chance to compare them visually. They look identical, it must just be the size of the internal tank. I wonder if both would actually work. At any rate, since My bowl says 1.6 gpf, my Ecoflush was 1.1 gpf, and customer service said to get the 1.6 gpf, I just installed the Flushmate 1.6 gpf. Easy to install. Functionality seems identical to the Ecoflush. Only discernable difference is that the feel of the handle when flushing is a little weird and has less of a tactile/positive catch feel to it. Hopefully it is less problematic.
You must log in or register to reply here.
Share:
Facebook Twitter Reddit Pinterest Tumblr WhatsApp Email Share Link
Top