However, ever since installing the new toilet, I've been having clog in the house main line only affecting that bathroom. The bathroom is toward the back of the house. None of the other bathrooms or kitchen are effected. I would get bubbles come up and had to get plumber ran the snake to clear it each time. It has been clogged 3 times now in 6 months. The last time the plumber cleared it, he said it's probably toilet paper (not stuck in the toilet). We also don't use that bathroom often. I just recently realized that it's probably the toilet.
It's a Glacier Bay bought from homedepot with dual flush 1.1 and 1.6 Gpf and it's flush is not very strong. A guy also came by with a snake camera and tested with a little bit of toilet paper and said it doesn't flush very far and think my drain pipe in that area is too flat. He recommended that I should get my drain pipe fixed and told me that certain section of my house subfloor near that toilet to be cut and fixed. However, this is a 20 years old house and I don't believe the previous owner would have such a problem all those years.

Before heading down that route, I think I want to change out to a better toilet. Is there a certain brand and type of toilet is good at moving waste further down the drain? Also, since my toilet water supply pipe comes out directly behind it, which limits my toilet selection, is it possible for me to cut it and attach an elbow to come out to the side of the toilet instead? I am wondering if there's issue in term of water flow or trouble later by doing this? Or do I need to cut the drywall and fix it behind there? 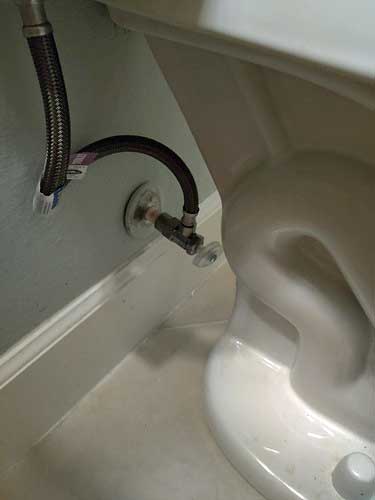 Kdo77 said:
However, this is a 20 years old house and I don't believe the previous owner would have such a problem all those years.
Click to expand...

I mean if the problem existed that long I would assume the owner would have it fixed unless they don't use the toilet or call a plumber to come and snake the line all the time. And I did change out the original toilet.

I would look at the American Standard Cadet Pro 10" rough model. It flushes well, and has some space in the back. 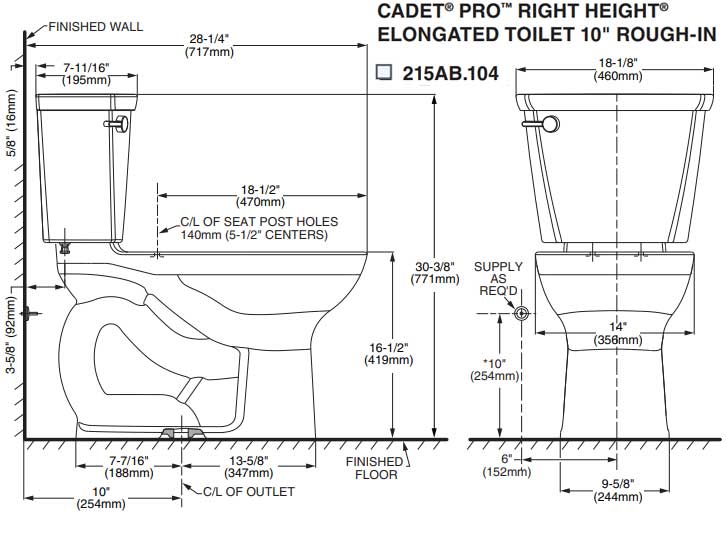 Also, putting a 90 at the wall to move the shutoff also works. That's not a problem at all. Is that CPVC from the wall? That can be a bit brittle, so be careful.

Thank you for the recommendation. I'll look into that toilet. Yes, that is a 1/2 inch CPVC from the wall.

Try getting a 5 gallon bucket or bigger. Put 4 or more gallons of water in there, and pour the the water into the bowl from as high as you can, as fast as you dare. See if the deluge gets things moving.

If the bowl fills up, stop pouring, but realize you are dealing with an obstruction down the path.

I did that yesterday and the whole 5 gallons went down pretty fast. Unfortunately, I no longer have the camera in my drain to see what's going on. Prior to this whole issue and not knowing any about plumbing drain, I had wrongly thought that the main 4 inch drain would get filled up with water and pushes the all the waste down to the city drain every time I flush. Also, the camera guy, who I believe is not a plumber that the plumbing company sent out, told me to do a test a flush with some toilet paper like normal usage. He told me that based on what he saw from a single flush, the toilet paper bundle only went about 5 feet when I flushed it. He stated that it should have continued down the drain and out to the city drain and believed the spot where it landed is because it got stuck due to the flat slope.

From what I'm seeing after some more research into this matter, it looks like waste only travel so far on a flush in the main drain. My issue with this bathroom is it is last bathroom in the house next to the pool. We don't use it often but occasionally guests use it. If it is not use, the drain in that area gets no water from any other source. Perhaps the waste and toilet paper dry up over time due limited use and eventually build up. Also, it has the weakest flushing toilet in my house. My other 2 bathrooms do not have this issue and they have American Standard champion 4 toilets. They are also get regular shower usage and located after the kitchen which regularly send water down the drain. They don't have the rough in limitation and the supply line issue.

Kdo77 said:
Perhaps the waste and toilet paper dry up over time due limited use and eventually build up. Also, it has the weakest flushing toilet in my house.
Click to expand...

Which is better, the first flush after 2 weeks of non-use, or the second one?

If the second is better, it may have been that the bowl evaporated, and did not start full. The first week flush refilled the bowl, and the second flush was fine.

Reach4 said:
Which is better, the first flush after 2 weeks of non-use, or the second one?

If the second is better, it may have been that the bowl evaporated, and did not start full. The first week flush refilled the bowl, and the second flush was fine.
Click to expand...

I would need to wait a week and check it. The toilet has the dual flush functions. It's possible guests use the weaker flush button. However, compared between this Glacier bay versus the AS Champion4, the AS Champion 4 feels a lot stronger. Initially, I was going to put the AS Champion 4 in the problematic bathroom but couldn't fit it in there and had to search for something that fit.
You must log in or register to reply here.

Flushmate vs Drake 776 - will pressure-assist help me?