Hi guys we have had major water issues in our house since we moved in about 5 years. Water pressure will be fine and then slowly over time will get worse & worse. At first I had no idea but then i started tearing apart shower heads, ect..... What I found was sentiment was be blocking the water flow. On our sinks i would find sentiment in the aerator. Today I was taking a shower and had bad water pressure and decided to tear apart the shower head (at this point the shower head is only 8 months old and this is what I found): 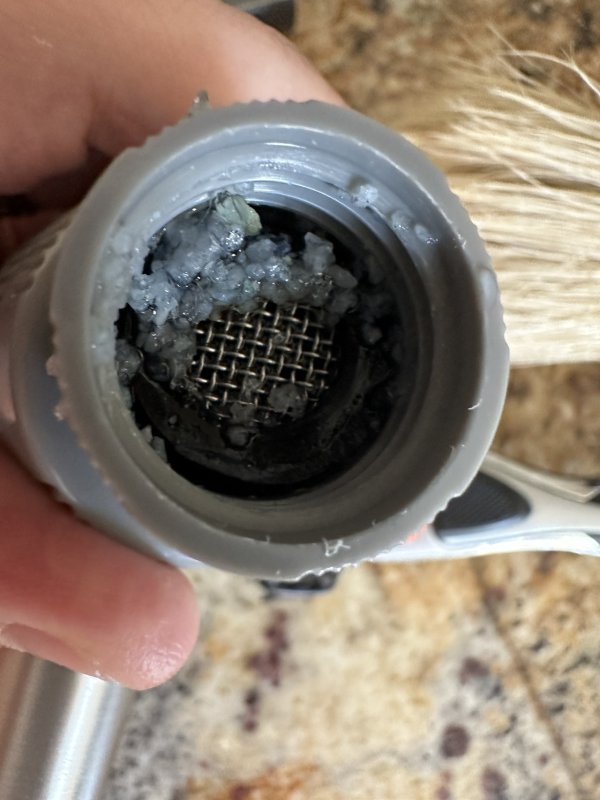 So having no idea what this is/was I called our local water department (thinking) it was sentiment coming through the water system. The guys I talked to there was great and asked me if I had an aluminum or magnesium anode rode in my hot water heater. Of course I had no idea. I sent this pic to his sell phone. I told him generally the sentiment I see (which is usually from the sinks) is a gritty substance that kind of reminds me of sand particles. He asked if it was blue/whitish (and I think it is). He told me this gooey substance I was looking at would probably be the same after it dried. At this point after I clean out the shower head or faucet pressure will be ok but will slowly get worse over about a month until its driving me nuts again and I got to clean it out again.

Anyways what the guys suggested was that I check the anode rode and verify whether its aluminum or magnesium. He said if its aluminum replace it. He told me there might be some build up of the sentiment and might have to have my water pipes. cleaned out.

Changing anode might be a good idea but it wont remove all that crap in bottom of tank. I replaced my anode a few months ago. First time and been in trade 35 years wow yea 35 I'm surprised myself time flys. anyway I thought id do it tank is just about 5 years old, went through the ordeal should a took pics and posted but I drained put a ball valve on drain port drain , flush , drain flush put new rod shop vacuumed out the inside I spent several hours kind of a waste of time but hopefully get more life out of it. I think rod is magnesium but its sectional and doesn't need a lot of clearance to install. old rod was toast and so many crystals came out the bottom

OP. I think you mean "sediment". and yes a deteriorating anode can create the particles pictured. You need to change out the rod and flush the heater--instructions for flushing can be found here and all over the web

The magnesium rod in our "new" heater only lasted 3-years almost to this day.--before it had eroded and started making the "rotten egg" stink...
Last edited: Oct 28, 2022

That looks like calcium to me. I don't think the anode is to blame. I've seen this before it looks like gel in the picture but I'm fairly sure it's calcium build up in the water heater. How old is your water heater?

If that is a jelly-like material, I would think anode.
You must log in or register to reply here.

Too Much Pressure in Water Heater?
2 3