Hello friends! Complete idiot here, and believe me I’ve tried everything before I reached out here. Basically I have hard water that is unresolved. My landlord is extremely unhelpful, unfriendly, etc..I have what I believe is an air injection DUAL tank fleck 5600se. That’s what’s printed on the label, but none of the diagrams/manuals ever matched what mine actually looks like. Mine looks like the fleck 5600sxt, with what I believe is the 3/4 turbine meter and the 2310 safety valve, .50gpm / 1.5lbs salt/min, so I’m really confused on why mine says 5600se but is completely digital and not analog. (Or at least I haven’t found any manuals). Here’s my story.

I moved from SW FL to NW PA. (I know..I’m crazy!) I’m on well water for the first time in my life and using a water softener first time as well, and there is def iron and manganese in the water. Toilets and water were all red and orange when I moved in (early July). I checked brine tank, no salt. Okay — added 3 bags of salt (4 people in my home). They were 40lb bags of salt that helps reduce iron. That’s what I would would do every month like clockwork, then when winter hit (coincidence — I don’t know), my hair started to get super brittle and as a blonde that’s a very bad look. Checked brine tank, NO salt was being used. Called my landlord, he said I must have broken it and refused to help, and I couldn’t afford to get anyone out here. Fast forward to today, I’ve been living this way since probably early Nov, hard water all day, every day. I checked for a salt bridge, nope, no blockages. Removed brine line and was able to blow air and pull out water, that seemed fine. Checked the safety float, no issues. Checked the valve for buildup, none. So I believe it all has come down to settings. The last person that lived here said they programmed it correctly. I have no idea how to program this correctly with dual tanks but something def isn’t working. I changed the master programming around the other day and it used 3bags of salt in ONE DAY. I believe the BF wasn’t even filling and when I turned it back on and did a regen that’s when all 3 bags of salt were gone. I won’t show what settings I had previously, but I altered them enough that the brine tank actually filled after months and took salt (which was my first problem) but here’s what I have now and as it stands it’s using 3-40lb bags a day!!! As a reminder I have two tanks. They’re large, approx 2.75 cuFT. I basically set each of the programming the same on each unit, except changed the tank value (which tank I was programming on).

**on each valve unit after the time it shows 2250, I’m assuming that’s gallons left but it hasn’t moved for days

** 4 people in the house, we use a LOT of water, and my washing machine is always going. So I have no clue what I would consider our daily usage. No irrigation system. 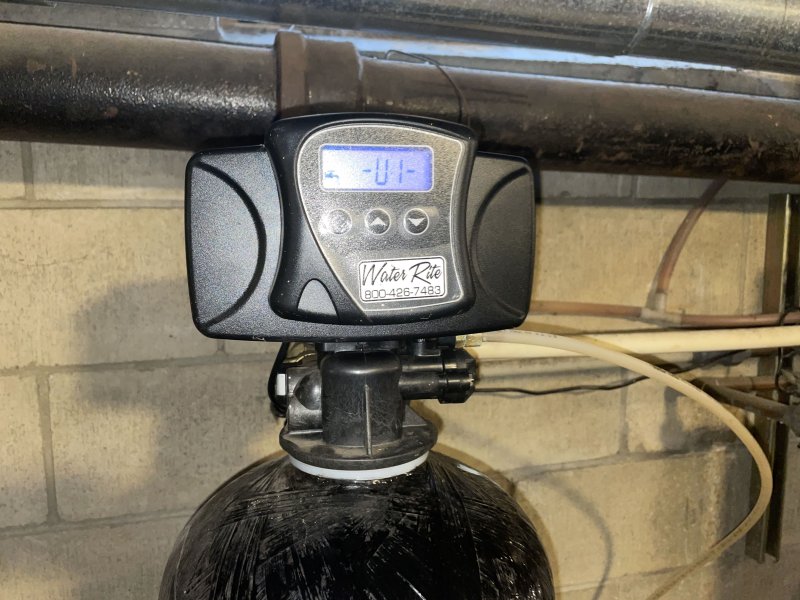 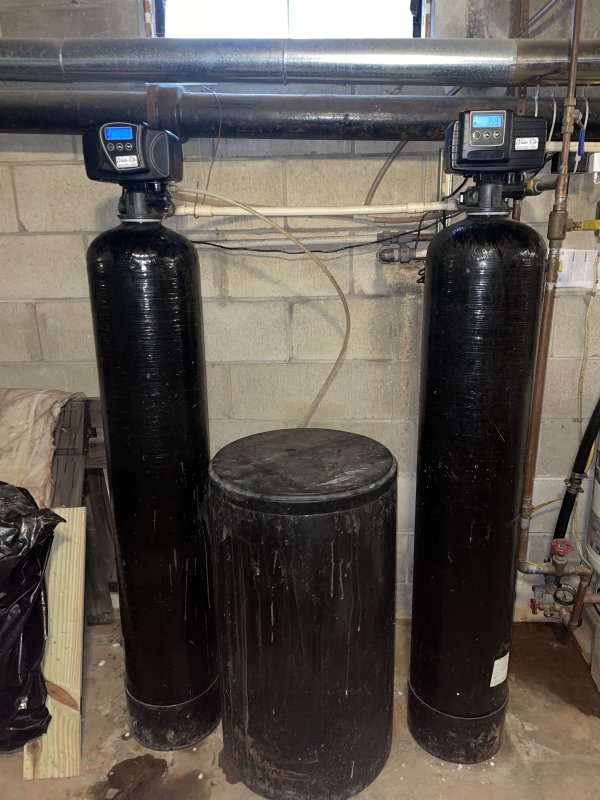 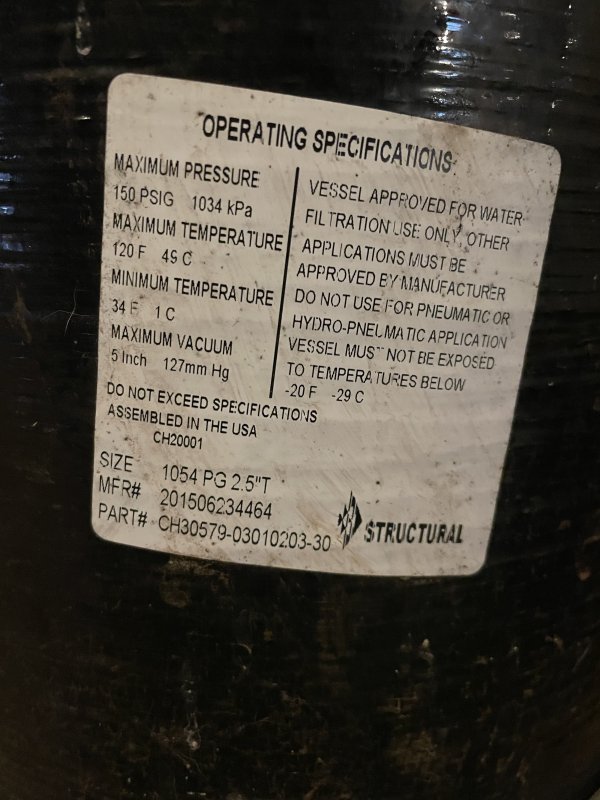 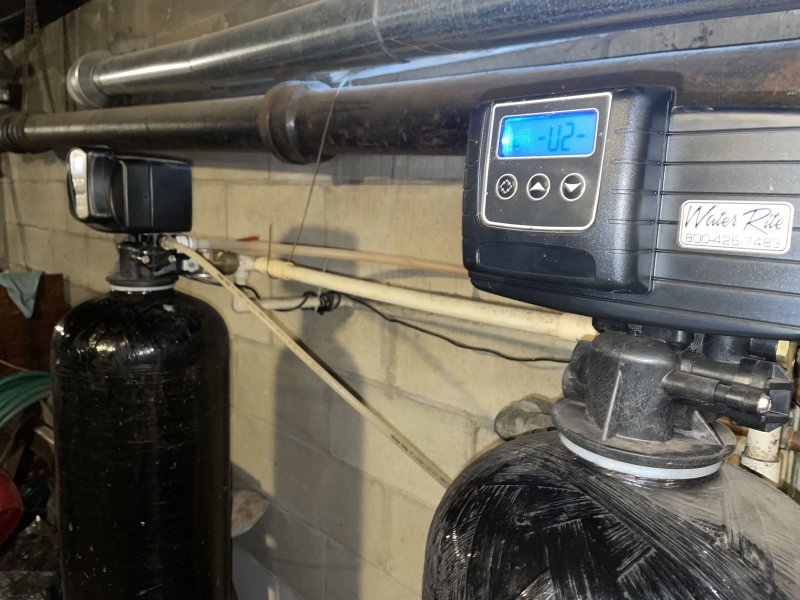 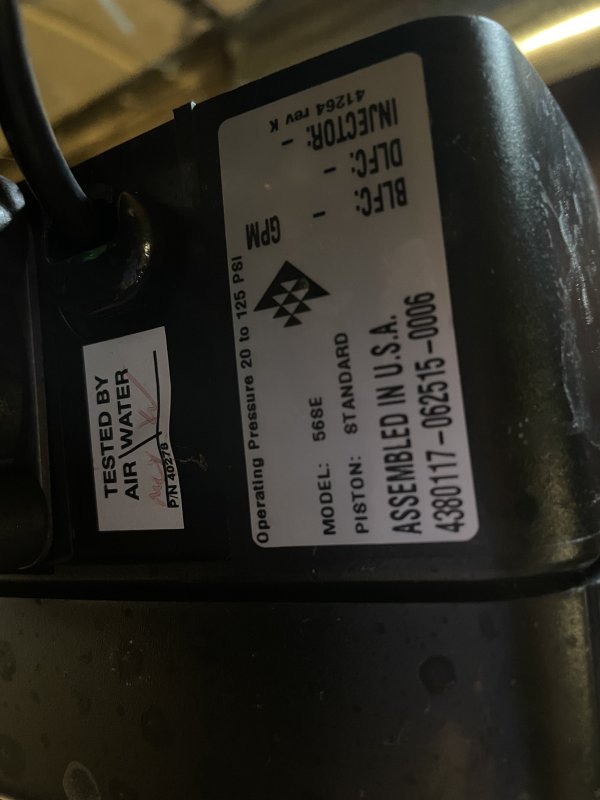 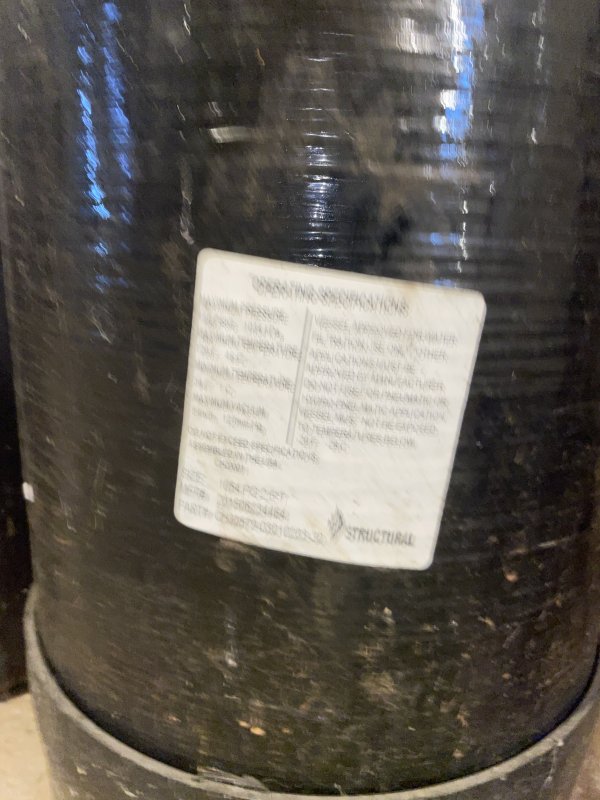 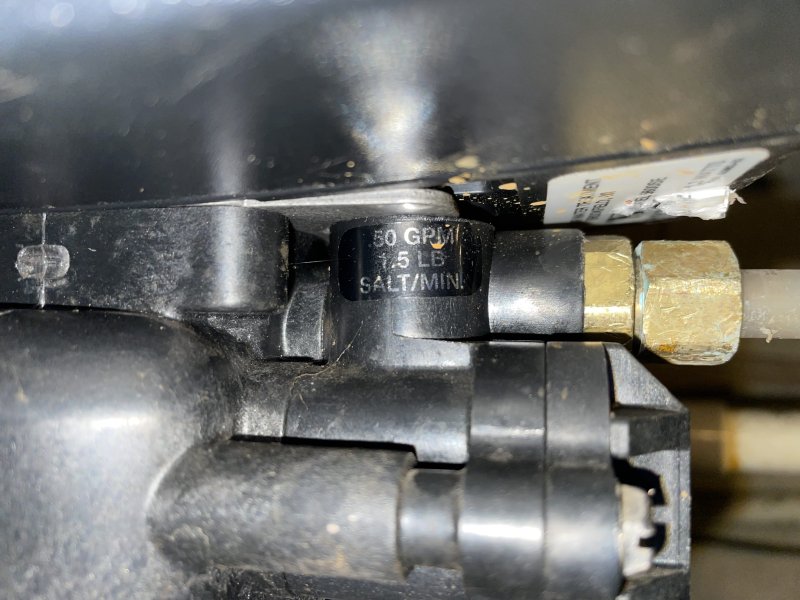 That’s it, that’s all I know. I’ve read so many manuals and watched videos that my brain can’t take anymore. I’m at my wits end, and meanwhile with all the months that have passed my Daugher and I have experienced tragic hair loss, if anyone has any suggestions, I greatly appreciate it, I really do.

I think the tank on the left will be the softener. It is the one connected to the brine tank. That is a 5600SXT despite the "56SE".

I expect the tank on the right will be an iron and maybe more filter. In that case, the connection on the left, as you face the unit, would be from the well.

Are your tanks 54x10, or 48x9, or what? I suspect 54x10 (4.5 ft high, and radius 5 inches). If so, that would normally have 1.5 cuft of media each.
Normally a filter does not have a meter, and is set up to backwash based on time. The 5600SXT cannot provide a whole lot of backwash gpm for a 10 inch tank. That is what mine uses, and I backwash at 5 gpm. My media is lighter than most iron media. I will be replacing my media, because it is beyond its expected life, and it stopped performing well.

I believe they’re 54x10. I have zero clue on whether the second tank on the right is a filter or a dual tank softener setup. It does have a control valve, but no water line is connected to it. It does have a drain tube though..I am a complete amateur, I have zero clue and I can’t get anything out of my landlord. He’s the type that if something goes wrong, it’s something I did to break it….”obviously”. I ended up calling two plumbers that ended up running out on me saying they knew nothing about water softener systems. Ugh. I’m out in the boonies so my choices are limited and so are funds.

I just don’t know where to go from here. People say they have a 32k capacity etc…I have no idea what mine could possibly be…

All I think I really need is to know what programming I need to use, if that’s even possible.

Here’s some updated photos. I don’t know if this may help you or anyone else that views the post. If it is a filter I have zero clue what settings should be set including volume…etc. Beyond what I wrote in my original post, that’s all I know, and have zero experience in this field. Haha…thank you very much!!

You have a "48000 grain" but you should never use that number for actually calculating. 32000 grains is about reality if it is working.


On your numbers, you would probably set that right hand tank up as a filter, and set DO to 3. VT = Fltr.
Maybe I will look at this again tomorrow.
You must log in or register to reply here.