I have a tiled shower in the lower level of my house. All of the work was done by a previous owner. After about a year of use I noticed the drywall at the bottom corners of the entrance to the shower was water damaged. After digging into it I found that some water had gotten under the floor. I then pulled up the floor, cut out the damaged Sheetrock and ran a dehumidifier to dry everything out. Once everything was dried out I repaired the drywall and installed a shower door. Previously, there was a shower curtain in place. I had assumed that water was either seeping through or getting around the curtain and that was the issue. With the shower door in place I began using it again with no flooring in place, just the concrete subfloor. I used it for approximately three weeks and didn’t notice any moisture on the concrete subfloor. I recently put down a vinyl plank floor but have not put trim in place. The floor has been in place for about a week now and today I noticed that the concrete appeared damp on either side of the entrance. It appears the problem has persisted but I don’t know where or how the water is getting out. I have no idea how the shower was waterproofed or generally constructed, I had the shower door professionally installed by a reputable company. Can anyone please point me in a direction to address this?!?

It could be moisture still coming out of the concrete. A source of water can be the tile grout. Grout is porous and does fail over time. How does the wall tile and at the bottom meet the floor or curb? Is there a shower pan or a recessed drop below the concrete floor with a raised curb? A picture would help.

To seal grout use a product like "511 Impregnator Sealer" with at least two coats. Reapplying it about once a year is good maintenance. Only need to reapply the bottom foot or so where the water hits it. 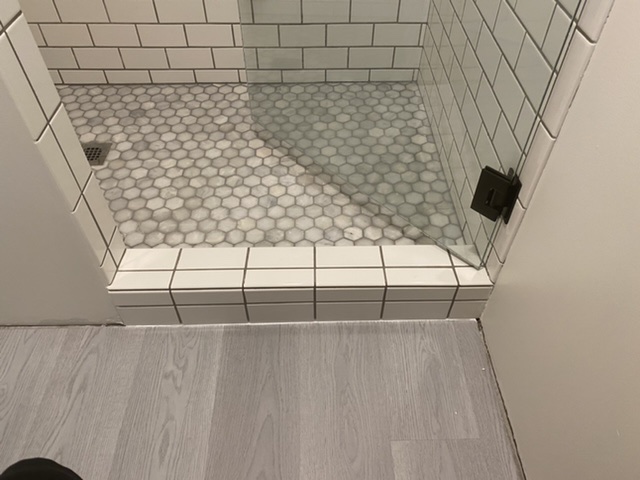 I have included a picture of the entrance. I do not have any pictures of the damage or repair. I forgot to mention that I resealed all the grout with two coats of a highly recommended sealer
Click to expand...

If a shower is built properly, it would not leak even before the tile and grout was installed! Anything you do after it's all done is a patch that won't really solve your problems. Depending on how the glass door was installed, that may be problematic, too. INdustry standards call for NO penetrations to the pan lower than 2" above the top of the curb, and that includes the curb itself.

One class I went to said that 70-80% of the tiled showers built in the USA were not done to industry standards. There are lots of known methods to build a reliable shower, and they aren't 'hard', but they are VERY detail oriented. IOW, everything has to be done right. The fact that yours is leaking implies it's one of the majority...not built to industry standards.

If you don't have details of how it was built, there's no easy way to tell what went wrong, but there's very little you can do without taking some of it apart and once you start that, often, it's better to just tear it out and start over.

My go-to place for tiling and showers is www.johnbridge.com

It really is guess work, sealing the grout dosent address the problem. Jasdnashua explains it well. leaked befor the shower door leaks after Im not too suspicious that door is causing leak

Was the original drywall about 1/2" from the concrete floor? It is so that the drywall doesn't wick up water from the floor? An old trick for concrete dryness is tape down a section of clear plastic for a few days, if moisture appeared under the plastic the concrete is still too wet. The vinyl plank flooring just maybe trapping moister. Nmeyer, you did what I would have done, dry it out and keep an eye out for a while and the vinyl flooring is a nice product for a bathroom.

I mention the grout since it happened to me and a neightbor with the same home. The back wall of the shower was a knee-wall where the water would hit it all the time. One day his fell apart, water penetration after maybe ten years of use. When I gutted my bathroom for a remodel, the same knee-wall blue board gypsum had turned to paste from water penetration and under the shower floor tile, the thin set grooves was full of water. The concrete shower floor was recessed below the bathroom floor. The water damage was exactly what Jasdnashua explained, improper installation. The home was built in 1990.

I noticed florida homes built over the last 30 years often have a depressed slab at shower, but since I havent spent a lot of time in florida, dont know why or how the shower is built, I know they dont float walls or hot mop pans typically.
I noticed when reading up on proper build techniques and look at actual work or you tube videos it seems everything goes out the window . Dont know about industry standards but drywall and shower walls isnt what Id do on my house, hardie backer or another product like durarock , Or the system Jadnashua studied Im guessing used Im pretty inpressed with. Also I still like Paper ,lath, scratch and floating the walls many homes here have that typicaly with hot mop pans and last 30 to 60 yrs , major disadvantage labor cost and finding a tile guy with the skill

Floating walls is a fine way to make a shower, but that skill is not that common anymore.

There are two thoughts on building a shower...manage the moisture so it doesn't get to the building structure, but that means things will get damp, or make the shower waterPROOF versus moisture proof. There's a bunch of tileable, surface membranes, with some from Noble company and Schluter company the oldest ones around. Everything else came about after the original copyrights expired, and are copies, without the history or depth of knowledge. Doesn't mean they don't work, but they are someone's idea of how to make it work, and often at a lower cost point, and IMHO, some of them cut corners.

Then, you have some tileable, foam-core panels. You can do some amazing things with them that would be very time consuming or nearly impossible to achieve using conventional methods like making curved things.

Moisture DOES get beneath tile...it's a fact of life that some just don't understand. When there's waterPROOFing just beneath the tile, there's lots less that can get wet, so a typical shower tends to dry out between uses. If you go with a conventional pan liner shower, the deck mud underneath the ttile does get wet, but done right, it weeps through the deck mud to the weep holes in the drain, and out, but it's constantly, slowly flushing through, but always damp after the first month or so. Personally, I prefer to not have that damp stuff beneath my tile in a shower, and the walls, since they're vertical and most of the water just runs down them, there's a chance that they get damp, too. That's why you need a moisture barrier behind it against the studs. It really depends on how the shower is built, how many and how long the showers are in it, and how often. Having good ventilation to help promote things drying out in between is important, too.

Floating walls is still common in Southern California, but I think it has gotten to the point where modest homes or average new homes have pretty much gone to hardie , drywall or something else under the tile. On remodel work in older homes we still have a good number of floating
You must log in or register to reply here.