Hi All,
We have a 4 year old Whirlpool water heater that is stumping me... when I increase the water temperature, the pilot goes out. Now, after reducing the water temperature, I have the heater is constantly heating water and a slight flow is coming from the pressure relief valve at all times, even after flipping the pressure relief valve open (and then shut) to maybe release something stuck in the valve (a guess, I know)...
The most immediate situation is the constant "on" status of the heater and the resulting constant flow of water. My best troubleshooting guess is to replace the pressure relief valve... does this sound like the place to start? It's not very old, but do they sometimes fail even when fairly new? Or should I be looking for something else...?

Replacing the T&P is a good place to start. They can fail for many reasons.
Pick up a pressure gage, you should have 80 PSI or less. If more you will need a pressure reducing valve. 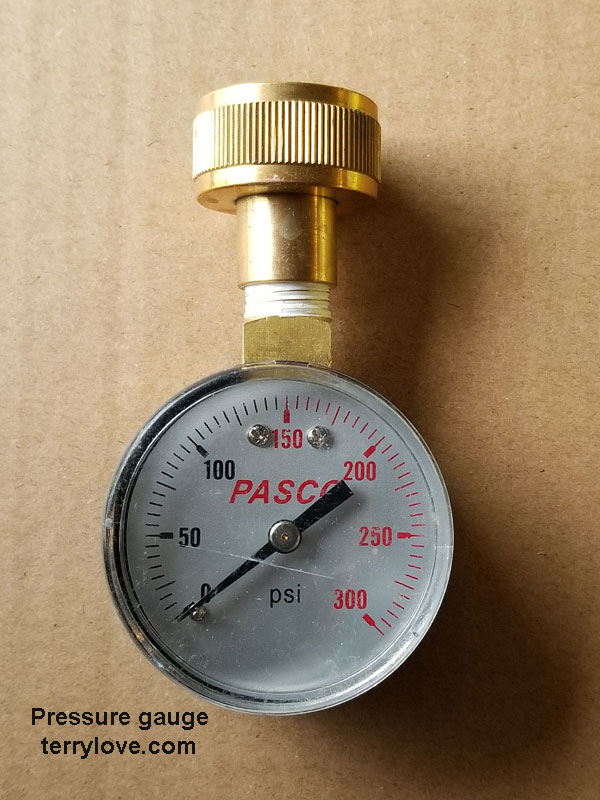 Normally found in the irrigation department of a hardware store.

Hi Terry,
Thanks very much !!! I am going on the assumption that a T&P gauge is the pressure relief valve and I do have a water pressure gauge around here somewhere, to check the pressure...

Is there a chance that the "raising the water temperature causes the pilot to go out issue" might be related to a faulty pressure relief valve? Or is that a whole other kettle of fish...?

2002sheds said:
Is there a chance that the "raising the water temperature causes the pilot to go out issue" might be related to a faulty pressure relief valve? Or is that a whole other kettle of fish...?
Click to expand...

I don't know why the pilot goes out when you raise the setting on the thermostat. You might want to contact Whirlpool about that one.

Terry said:
I don't know why the pilot goes out when you raise the setting on the thermostat. You might want to contact Whirlpool about that one.
Click to expand...

Hi Terry,
A local plumber suggested that both issues might be gas pressure that is too high...
They said that the heater “is running away with itself”, and that I should call PGE (our utility) to ask them to check the
Does this sound familiar? I will be checking the water heater again shortly...I may try turning the supply valve down slightly to see what that does...

A T&P valve should open under a few conditions:
- you manually open it
- the pressure exceeds 150psi
- the temperature exceed 210 degrees

The most likely problem is, assuming you have one, your expansion tank (ET) is shot or has lost pressure. When you heat water, it expands. If it has nowhere to go, the pressure rises rapidly, and will either leak out a weak valve seal, or, if those are good, force the T&P valve to open. That valve is a safety device that is not designed to be used on a regular basis, so, while it could be defective, it may just be doing what it is supposed to. When opened, you could get some crud on the sealing surfaces that won’t allow it to be able to reseal, so fully opening it sometimes helps flush that out, but sometimes, just requires replacement.

You’ll notice the most issues after using a lot of hot water, then, not using any water while the water in the tank heats up, resulting in the maximum amount of water to expand.
You must log in or register to reply here.

Too Much Pressure in Water Heater?
2