So we thought a larger than normal tub was a good idea but didn’t realize how long it would take to fill it up! The valve is a Moen 2570 and the trim is Moen Arris. The spout delivers right at 2.5 gallons a minute. Tankless water heater so enough supply to fill it, but about 15 minutes to get it done. Valve is installed with the correct end pointed up and supplied by 1/2” copper. I have access behind the valve wall thanks to some drywall repairs that need to be done. Any recommendations? Maybe change the valve to something like the Moen S3371 that has 3/4” inputs and run 3/4 pipe to it(easy to do from my crawlspace)? Are there spouts that take 3/4 supply?
Don’t want to have to replace any tile, but wouldn’t mind cutting a new hole into it if necessary. Diverter valve? 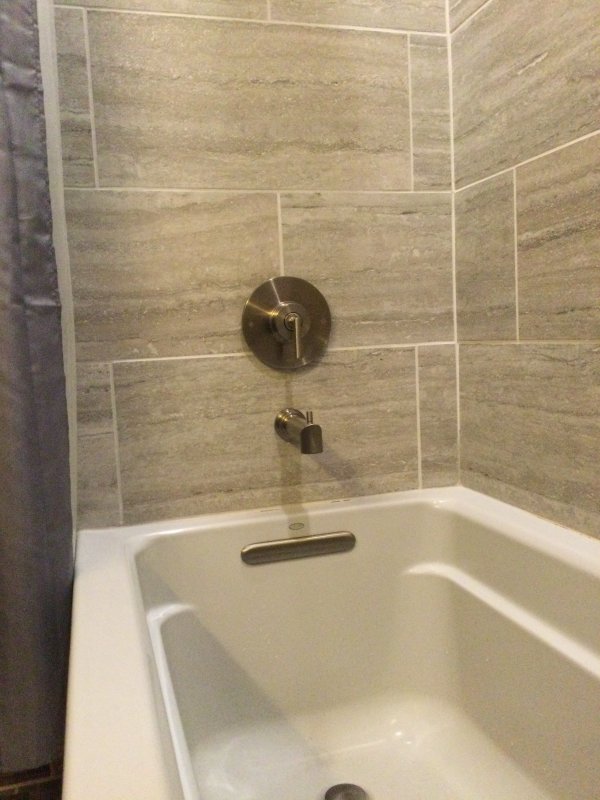 I don't know that you can be sure of that.

I would put a pressure gauge on the hot of your laundry tap, and fill your tub. If the water heater is restricting flow, then expect the pressure gauge to drop. If the hot pressure drops considerably, also check the pressure for the cold. If that drops too, then something before the WH is dropping the pressure. For example, you could have a clogged cartridge filter, or a partially closed valve. Or the line from the street is obstructed.

2.5 gpm is not much at all for a tub spout. Another test is to measure how long it takes to fill that 5 gallon bucket if you just use cold.

A little more to the story. 1 minute to fill 5 gallon bucket on cold with I'm sure at least a little hot mixed in. 2 minutes all the way to hot to fill same bucket. Seems to have a sweet spot for flow at about 3/4 of the way on.
The tankless heater is set at 120 degrees so there isn't much cold water mixing to make it a comfortable temperature for bathing or showering. Could it be that I need to bump of the temp of the tankless so the sweet spot where the flow is best matches the best flow?

David Bingley said:
The tankless heater is set at 120 degrees so there isn't much cold water mixing to make it a comfortable temperature for bathing or showering. Could it be that I need to bump of the temp of the tankless so the sweet spot where the flow is best matches the best flow?
Click to expand...

I would turn the WH temperature down as low as it goes, and see if the flow improves. Easy to do, I expect. If flow improves, we can discuss why.

Also, I still suggest checking the hot water pressure at the laundry spigots. A 0...100 psi pressure gauge will cost you under $20 -- maybe a lot under.

Depending on the tankless unit, most have a variable burner to help keep the temperature where set, and some also have a throttling valve to slow the water if it cannot achieve the desired set point. It sounds like yours is slowing the water flow so it can increase the temperature rise. You may get more flow if you lower the setpoint on the WH. It may change considerably come summer, when the incoming water temperature can rise a lot, making the load on the tankless much easier. This is a common issue with a tankless unit, especially in areas where the ground water temperature can vary a lot to allow it to get quite cold. I've measured my incoming cold water down to 33-degrees F after a cold spell...a tankless system would have to work really hard to achieve decent output levels under those circumstances. Many people only look at the 'nominal' output, but that's based on incoming water being 55-degrees F in most cases...it can go down a lot as it comes in colder...in my case, 22-degrees, which would take your 120-degree setting down to 98 at the same flow rate, or, as you found out, lower the volume considerably. Think moving your hand through a candle flame...do it slowly, you'll burn yourself...do it fast, and you may not notice it at all. The water is likely moving at about 5fps through the heater...not leaving it much time to transfer heat to it along the way.

Some tankless systems can be ganged...i.e., install multiple units to then be able to increase the available volume. That can get really expensive, but if done right, can provide whatever volume you may desire. Otherwise, you learn to live with it!

If you lower the WH set point, you'll likely need to adjust the temperature limit stop in the tub valve to allow less cold mixing. Some valves won't let you get to all hot, so you may need it a bit above your desired mix temp so at least a little cold can be mixed in at the tub.

FWIW, I put in a 6', deep air tub. I thought about a tankless unit, but realized it wouldn't work for me where I live, in the place where it could be installed. Since I have hydronic heating, I just made sure my indirect WH was large enough to fill it without issues...

Temp turned down to 99, no difference. I will get a gauge in the next week or so and report back. We are on a 40/60 jet pump and pressure tank setup here.

WEll, 99 into a tub won't be all that comfortable. As I mentioned, you may need to take the trim off and readjust the high temperature limit, but you may be at the limit of the tankless unit in the winter. The bladder pressure tank should help temper the water, at least the first few gallons, if it sat in the house long enough, though.

David Bingley said:
Temp turned down to 99, no difference.
Click to expand...

It was worth the test. Your tankless water heater may need to be de-limed. That is usually an annual job, and maybe more often if you run hard water through it.


David Bingley said:
I will get a gauge in the next week or so and report back. We are on a 40/60 jet pump and pressure tank setup here.
Click to expand...

You should have a permanent one at the pump by the pressure switch. And then a second gauge to let you track down pressure drops.

What temperature can you achieve while doing that?

Some tankless systems use volume throttling to retain their set outlet temperature. They all generally, can modulate their heating system when full energy isn’t required. They all just end up not getting their full temperature setpoint when asked for more volume. The advantage of a tank...full hot until it is exhausted.

2.5gpm is really low. The industry maximum with a 1/2” pipe should be about 4gpm with copper although it will flow more than that if allowed, but from a design standpoint with copper, 4gpm (5fps velocity) is the maximum recommended. It sounds like there’s some restriction in the line, and that might be the tankless unit itself. When was the last time you delimed the tankless system? If there are mineral deposits in the heat exchanger, that can limit both the volume and the ability to transfer heat. On most systems, that needs to be done annually, and with harder water, maybe more often to maintain full performance.

A typical 1/2” tub/shower valve is usually rated for somewhere between 5-6.5 gpm. A 3/4” one doubles that. If your valve has integral maintenance shut offs, they may not be fully open.
You must log in or register to reply here.

Symmons Shower Diverter too much water from tub spout