Hello, longtime lurker here with my first post! I'm a DIYer plumbing a tub/shower with Moen m-core parts. I had intended to follow the layout in the first image from Moen's online design guide, which caps the shower port and includes a twin ell. However, the instructions with my mixing valve specify a distance between the valve and the tub spout, I believe to reduce flow restriction to the spout - see second image - but this is with the shower port directly plumbed/no twin ell. I'd like to locate the mixing valve higher up the wall (further from the spout) if I can - as this will be 99% a shower - with the spout in the usual spot. I will be using 1/2" copper throughout. The showerhead will be a rainshower, so will be throttled and also be quite high (I was thinking about 84" for the elbow). The tub spout is a slip on over 1/2" copper, so it unfortunately won't open up to 3/4" out of the twin ell.

My question is: in this case, do you think the use of the twin ell overrides the valve-spout spacing requirement? To me it seems that it would - you are gaining more 'reservoir' height by capping the shower port and using the twin ell, as in the first image. I emailed Moen about this, and they just copy/pasted the valve instructions in their reply. 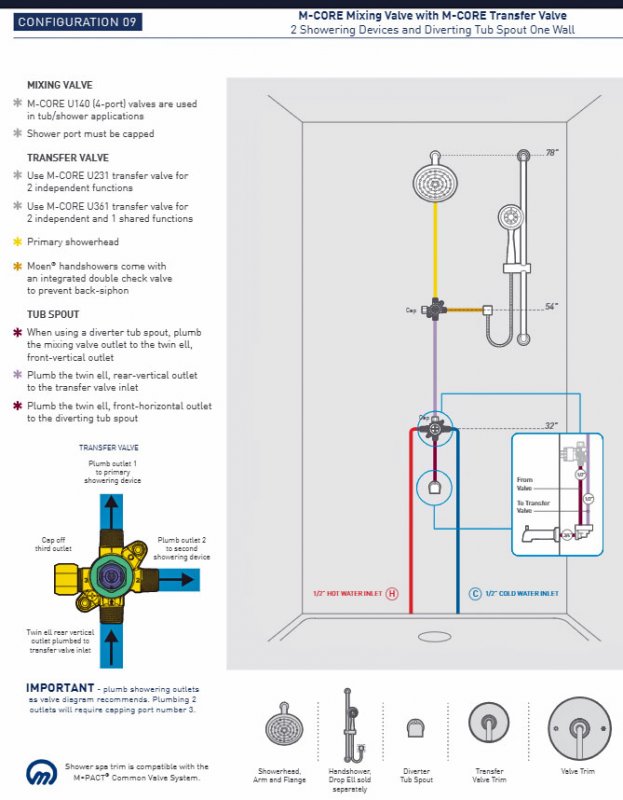 NomicEnvy said:
My question is: in this case, do you think the use of the twin ell overrides the valve-spout spacing requirement?
Click to expand...

A twin ell at the diverter spout should override the spacing requirement IMO. I am not a pro.

OK, so the question is for a standard installation using the top shower port, why do the instructions specify maximum 11" vertical between the valve and the tub spout? And then if you plug the shower port and use a twin-ell, does that restriction still apply?

The answer to the first question has got to be that extra length between the shower valve and the tub spout acts as a restriction, just like using too small a pipe would (although much less significantly), and so could cause sufficient residual pressure at the valve outlet to allow water to rise up and leak from the shower head.

Which then means that with a twin-ell, that 11" requirement would not apply, as the top shower port is plugged. I conclude that with a twin-ell, you could put the mixing valve anywhere you want, and the diverter functionality only depends on the height difference between the twin-ell and the shower head.

[Reasoning this out as I go, but I'm pretty sure that is all correct.]

I concur with Wayne

Following up on this in case anyone else searches for this problem - I built this system as in the Moen design guide image above, but with 20" from spout/twin ell up to mixing valve, 37" from twin ell up to diverter, then another 29" from diverter up to a high rain showerhead. These spacings were for aesthetics, plus to align fixtures to be at tile joints to make tiling easier. The shower works great with no stacking leak. Twin ell for the win!
You must log in or register to reply here.