I have trying to get a Logamatic 2107 night setback to work on a BFU controlled mixed circuit on a Boderus G115WS. Instead of setting the temperature back, the boiler just stops firing at the setback time until about 3AM when the boiler temperature has fallen to about 68. I can't believe that the unit isn't defective. At this point I have narrowed it down by setting up the Logamatic simply as follows:
In manual day mode the system works great, and I can dial back the temperature at night without a problem. I have oversized cast iron radiators that used to overshoot with my old boiler, and the Logamatic and the mixing valve on circuit 2 keeps things very steady. So it would be great if the night setback also worked! Another weird this is that if I wake up at 2AM, if I power cycle the Logamatic it seems to start working again. Also, it seems that the heating curve 2 shown on the LCD is correct -- 50-86, 32-111, and 14-133 -- and the outdoor temperature shows correctly (e.g., 30) -- it's just not being followed).

Does anyone see anything that could be wrong with the setting that would cause the boiler to turn off rather than set back by a few degrees?

I've contacted Bosch, but it seems they are stumped and/or haven't found someone who can spot what's wrong.

Room set back have a room sensor? When cycling power will reset any failures or conflicts. Never worked on this.control I'll let look.at tomorrow when im fresh. Where this control tied into the boiler?

A Bosch BFU (HS2105) room sensor is connected to a FM241 mix controller in the Logamatic 2107 (pretty much like Example 8.7 in the Applications Manual) -- works great except for the automatic setback mode. In fact, I replaced the BFU because I thought it might be bad with no change. So this seems like a Logamatic specific issue, and more specifically a room-sensor-based programmed setback.

I've been looking at the install and service manual page 41 has a setback mode with room sensor should be set on 3 download your manual now. This is a safe site. They have a few different manuals for this control. 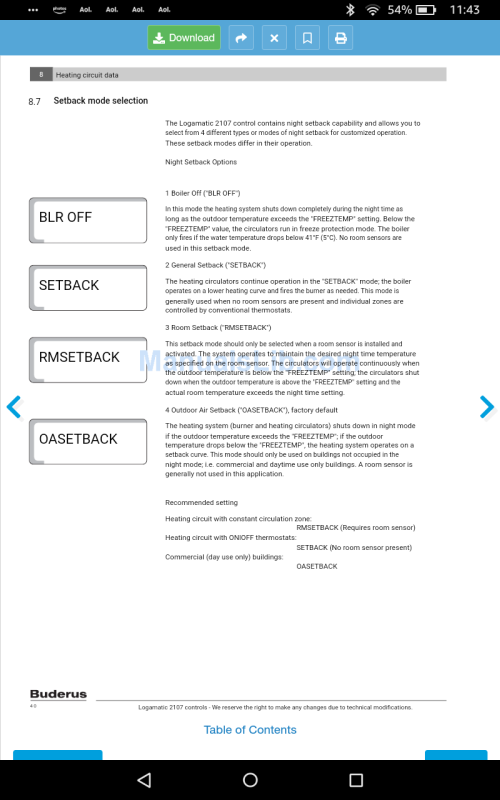 Sorry its a little blurry

I went back and read the notes in the Application Manual for Example 8.7 -- I see that is says something curious:

So it seems that the "initial part of night setback period" is lasting way too long -- I don't see what is supposed to end that period.

Yes -- I have it set to RMSETBACK so that it uses the BFU room sensor.

I am tempted to disconnect the room sensor and do an experiment with just SETBACK (i.e., just outdoor reset curve). The other two settings would work.

I don't think there is an issue here, but I drew up the wiring diagram of how the system is set up right now...

I've been monitoring the boiler, mix, and room temperature so you can see that the boiler just shuts down when the night period starts...