Help finding relay to use for DHW priority zone

Hi. I have a 12 year old boiler with 4 zones, one of which is a DHW tank. The on board controller does not have priority for DHW. There is a schematic which shows a relay that can be used to give priority to the DHW zone.

I can wire things up given instructions, but not able to figure out what part I need to make this work.

I have attached schematic.

My understanding is that it's a relay that shuts off power to the zone valves when DHW is calling for heat, then turns it back on when DHW is at temp.

Thanks for any help finding this relay. 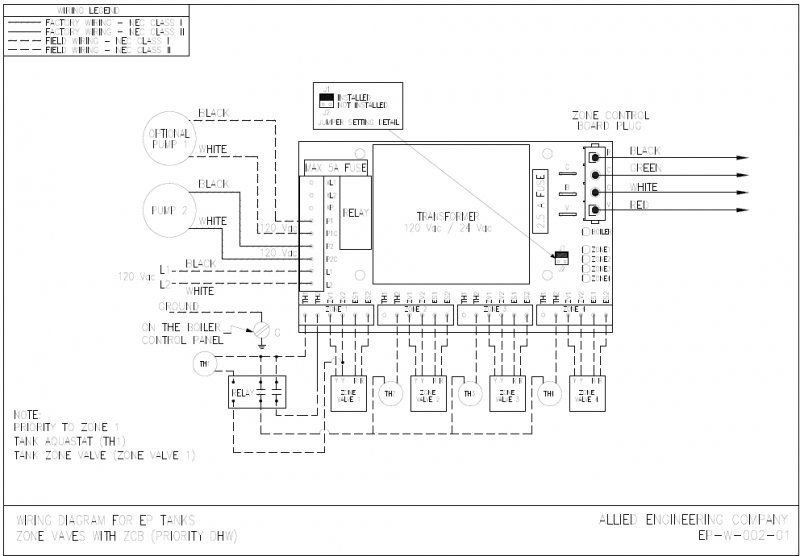 That is a blurry picture but you can use almost any 24vac spdt relay. This one comes with a nice base using screw terminals: https://www.amazon.com/URBEST-HH52P-Electromagnetic-Power-DYF08A/dp/B00NN5ABG2

FWIW, many boilers are oversized, and will work just fine without a priority zone for the indirect.

Can't tell you how to make your controller work with a priority zone unless the diagram is readable, which yours is not.

here is a pdf of the diagram.

speeder said:
here is a pdf of the diagram.
Click to expand...

Stuff has it right- almost any 24VAC relay will work.

jadnashua has it right- most boilers are so oversized for their loads (and often their zone radiation) that priority zoning for the water heater usually isn't necessary. But apparently you're running into times when it IS necessary?

Dana said:
Stuff has it right- almost any 24VAC relay will work.

jadnashua has it right- most boilers are so oversized for their loads (and often their zone radiation) that priority zoning for the water heater usually isn't necessary. But apparently you're running into times when it IS necessary?
Click to expand...

What happens if the DHW zone fails? Is there a time limit that will prevent keeping the heat off for an extended period of time?

dapoppa said:
What happens if the DHW zone fails? Is there a time limit that will prevent keeping the heat off for an extended period of time?
Click to expand...

Dana said:
most boilers are so oversized for their loads (and often their zone radiation) that priority zoning for the water heater usually isn't necessary. But apparently you're running into times when it IS necessary?
Click to expand...

I was really only thinking about the scenario that the heat has been off for a while, and the 2500 s.f. of tubing is filled with cold water. If for some reason there is a call for heat in the whole house, and a few people need to take showers, it will be a few hours before the boiler can heat up the water enough such that it will be hot enough to start heating the water in the DHW tank.

In 99 cases out of 100 those fears are unfounded. Is this only a thought experiment, or have you experienced poor hot water delivery?

What is the radiation type, and how much does it emit at an average water temperature of 120F? If big old fashioned radiators, how much water volume?

What is the DOE output of your boiler, in BTU/hr?

If your boiler's output is 75,000 BTU/hr, and the radiation can only emit 50,000 BTU/hr at 120F the remaining 25,000 BTU/hr would be going into a 110F tank. It'll take awhile to recover if somebody takes a long enough shower to bring the tank down to under a comfortable 105F showering temp, but the radiation will be emitting less at the lower temp too. It'll be no worse than an electric water heater.

Only if the radiation can emit more than 90% of the boiler output at 120F would it be an issue, but still not an hours long wait for hot water.

The more usual condition is that he radiation may be able to emit 100% of the DOE output at 180F entering water temp, but only about 35% of the output at 120F. So the indirect would still be taking the lion's share of the boiler output when the indirect temperature dropped to 105F.

With some real numbers on the tubing & radiation volume, heat emittance, and boiler output we can get a handle on just how close to the line you're skating, but it's pretty rare to fall short.

Well the real world scenario was a tradesman had turned off the boiler switch in the basement by accident in the morning and when night time showers began, there wasn't any hot water. Dishwasher, laundry and normal hot water use drained the tank during the day.

Turned the boiler back on and hadn't thought to turn off the thermostats to give priority to the DHW tank. It was hours before the water was hot enough to take a shower.

How many feet of what size tubing?

How cold did the floor get before the boiler was turned on?

I presume the boiler's output is mixed down to some other temp for the floor, if it's a cast iron boiler(?).

How big is the indirect tank?

If it normally has enough hot water even when it's cold outside when somebody isn't having a stupid-attack and turning off the boiler for hours & hours it doesn't really need to be zoned priority. When the duty cycle on the heating system is low due low heat load the water temp requirements are low and the thermostats are satisfied relatively quickly. When it's cold outside and more of the output is going toward heating is the real test.

Zone the DHW priority if you like, but I personally wouldn't bother hacking in a separate relay just to deal with an issue surrounding the one day out of 5000 that somebody might inadvertently leave the boiler off all day.

Don't know how cold the floor temp got, but air temp went down 3 to 4 degrees.

I assume that it's more than just heating the 30 or so gallons of water in the piping as the concrete floors are also pulling heat out of the pipes.

Having something in place for these one in a million occurrences is what makes you a HERO! haha.

You're right of course, there's also the other scenario of this happening, and nobody is taking a shower, but everybody is freezing their ass off waiting for the HWT to get hot and nothing going to the heating system...if there was only some way to override it and choose normal operation, or heat or hot water priority.

Given that the plumbing didn't freeze I'm going to hazard that it was 3-4 degree Celcius rather than Fahrenheit.

The thermal mass of the concrete radiation is significant enough to matter when raising the temperature of the concrete by 15-20C or more. That's a much bigger deal than only raising it by 2-3C during normal calls for heat.

The thermal mass of the concrete is also what's going to save you from that other scenario, when 8-10 people take a shower in less than 90 minutes on a cold day in January. It's still emitting heat long after the heating water has stopped flowing.
You must log in or register to reply here.

Boiler does not fire up intermittently