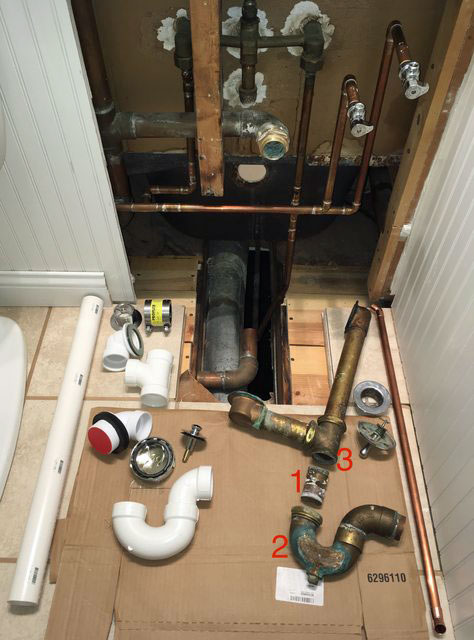 My shower drain from the early 1960s broke just above the trap (#1 in photo) due to corrosion and me regrettably pouring boiling water down the drain in an attempt to clear a clog. In hindsight using a plunger would have been a better choice.

Another mistake might have been to cut out the trap (2). I saw the corrosion on the trap caused by spending 60 years touching the heating duct and figured that might as well be replaced too, but after getting it out the corrosion only seems to be on the surface. I also didn’t know I could have easily taken piece 1 out of the trap. Piece 1 was connected to the trap only with some kind of paste that I’m guessing is thread sealant. The top of piece 1 has tiny threads that threaded into piece (3) with thread sealant. This is all 1.5” pipe as can be seen written on the copper trap.

I went to a plumbing supply store and bought PVC replacement parts, but the outside diameter of the PVC trap is much bigger than the old copper trap, and the copper trap was tight against both the heating duct and the 1/2” hot water line. I could cut and solder in new half inch line at a 45 degree angle to bypass the trap area, but I’m not able to compress the heating duct enough to fit in the new PVC trap. The bottom of the duct is against the drywall of the ceiling below, the side is against the floor joist, and the top is against the shower drain pipe where the pipe goes left into the joist.

So I don’t think I’ll be able to get the PVC trap to work here. I might be able to put the copper trap back on. I’ve successfully soldered about a dozen 1/2” water pipes (some of which are seen in the newer looking 1/2” pipes in the wall in this photo), but have never tried 1.5”.

I went back to the store thinking I could buy replacement copper or brass parts, but they didn’t have any and couldn’t order any. Ideally all I would have needed at the start of all this is a new part 1. Can part 1 be found anywhere nowadays? By the way the walls of part 1 are super thin. I guess that was considered ok for a drain connecting piece, but I can see why it was the weak link in this drain system.

Any advice people can give would be greatly appreciated. Ideally I could just order a replacement part 1. I would need to know what thread sealant to use top and bottom. I’d also need to reconnect the trap. I’m not sure how to best do that. I see that there is such a thing as a copper pressure slip coupling fitting for 1.5” size. Maybe get that, cut the existing pipe back a few inches, melt out the old pipe still in the trap, then solder on a few inches of 1.5” pipe to the trap and solder the 1.5” pipes together with the slip fitting. Can only a few inches of 1.5” copper pipe be bought? I’d rather not have to buy 10 feet or even 2 feet.

I could also order a new drain system like this one that I think includes the correct part 1 I need? I like that it has more classic in the tub fixtures than what comes with the PVC setup. But I’d prefer reusing the original parts in the shower tub since they’ve been with the house since it was built.

Or I could call a plumber. I will have at least saved money by taking out the vanity and cutting through the wall and floor. But I really was hoping to do this myself.

Thanks for your help!

I see you have a proflex coupling there. They do make those in copper x copper sizing. Finding that may be harder, plenty of plastic x copper couplings around. With the right coupling, you might be able to reuse it.

The tubular at the bottom of the waste and overflow is thin with threads on one end. The brass p-trap you have has a 1.5" slip joint nut and also should have the washer for that. Turning the nut clockwise snugs it up against the tubular pipe.
You must log in or register to reply here.

I need to move the plumbing for a shower base over 1" what degree bend should I use above the p-trap with only 14" from trap to drain on base.

Can I raise bathroom sink drain 4"?