So I came into possession of a couple clack 0844 tanks that had been used for carbon filters. just a basic in/out head on them, no controller, no bypass or anything.

was hoping to be able to use one (or both) to build a saltless iron/H2S filter for my parents house up near Mt Pleasant MI.

My dad will *not* have a salt based system in his house. He doesn't like the taste of it. Trying to save mom some cleanup (rust stains), increase the life of aerators/faucets, and having to use iron out to keep the whites white - I grew up with a lot of socks and undies that were gone to rust well before I wore holes in them lol.

Thankfully its just iron and not iron bacteria (no iron slime anywhere present in the system, even decades old toilet tank upstairs) so I have that going for me.


So I'd like to be able to build them something that'll help with the rust stains and getting rid of the rotten egg smell they get if they use whole house carbon blocks - short of having them change the carbon every 2-3 weeks to keep the sulfur down.
Initially I was looking at using a Fleck 5600 backwash valve with my tanks, but it appears (from what I can find so far) that I'd almost need to have an air injection system along with the proper media (leaning towards KL-10).

Problem being - cost of an AIO head - by the time I purchase one of those + media I might as well just buy one of the complete budget systems online and toss my tanks to the curb. It eats any "savings" I had intended to realize by piecing the system together myself

In all my searching I found
Durawater Air Injection Iron Eater Filter.
There's a couple different brands in this price point - and although they use filter ag plus instead of KL-10


I will be putting in post iron filter a pair of big blue 20" housings on the filtration loop, with the intent of one carbon and one sediment - or maybe two carbons if its deemed better suited, but sediment/carbon to begin with at the start.

So my question is - am I missing something here? do I need to look at a different product/valve for my tanks?

Just buy the budget system and donate the tanks? Use the tank(s) as is for something else as part of the system that doesn't need backwash?

Thoughts and input would be highly appreciated!

PS: not concerned about flow - we've got TONS of that, and the physical plumbing side is covered too so I just need to figure out how to piece this system together in the most economical way possible.

You could inject H2O2 and use GAC to remove the surplus. There are two general ways to do that. You can inject before the pressure tank, in which case there will be sediment at the pressure tank. Or inject after with a proportional pump and sensor.

Sanitizing your well and plumbing might help the H2S for quite a while. Not sure about the iron. https://terrylove.com/forums/index....izing-extra-attention-to-4-inch-casing.65845/ is my sanitizing write-up.

If the H2S is more in the hot water, there are things you can do with that.

I should have mentioned I'm essentially trying to set up and have an absentee Style maintenance capable equipment package. Set it and forget it

My father's knees are completely shot. He doesn't need to be going up and down basement to mess with this.

I'd rather avoid any kind of chemical injection system if at all humanly possible. I want them to essentially be able to forget this system is there , and I do a media change every 5-7 years.

Its also Part of the reason I'm going with the 20 in Big blue canisters - with just the two of them I only have to worry about changing the filters out maybe twice a year and they'll be golden. 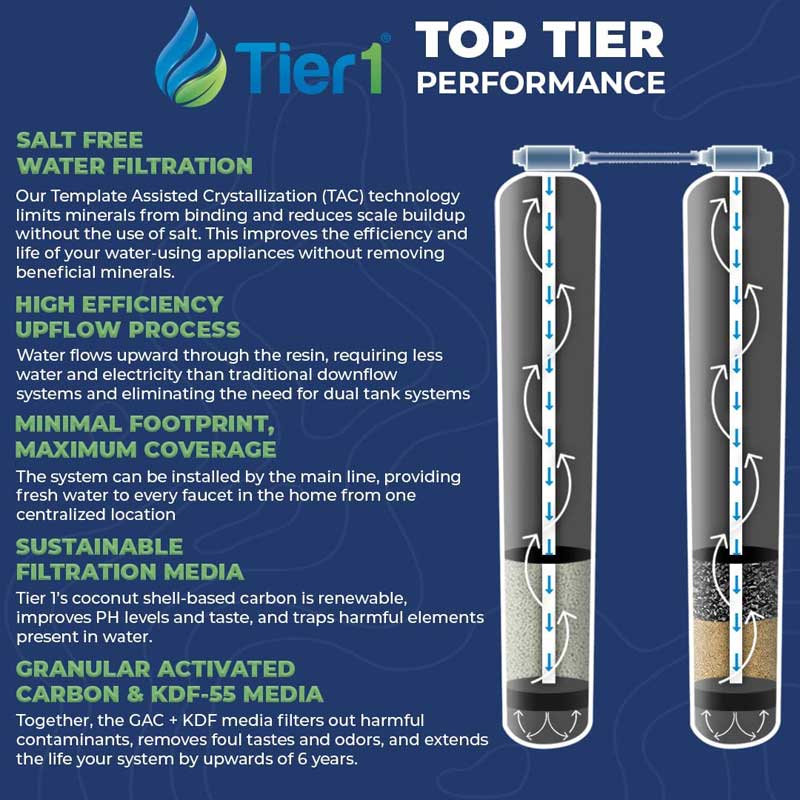 can i just maybe pipe the units i have in the proper upflow config by controlling the in/out direction on the heads and make something like this functional?

Yes, there is a "study" that seems to say there is something there, but there is no test AFAIK that can test that the water has or has not gone thru TAC.

Carbon, on the other hand, can do great things. Remove contaminants. Remove chlorine. But more is better.

KDF? I have not studied that, but I think those media can do good things. They generally require very high backwash rates. I am not a pro.

As with most things, there is a penalty by taking shortcuts.

Upflow filtration will rely on water flow to fluidize the media upward each time water is flowing to faucets. When there is little flow to fixtures, there will be little media lift whereas when the flow rate is high, the media will be lifted much higher and possibly too high within the tank. Because the media is being fluidized, an upflow filter will be less effective than a comparably sized down flow system since the spaces between the media granules will allow contaminants to pass through the media bed.

Salt free systems are considered to be 'water conditioners', not softeners, since they do not remove hardness but are only intended to keep hardness minerals in suspension so they will not accumulate as scale on the interior surfaces of water pipes and water heaters. The effectiveness of salt free systems will be usually maximized by keeping the water flowing 24/7 such as while using circulator pumps.

Depending on the level of hardness in the raw water, there are usually measurable benefits to removing hardness with a true water softener. A salt type softener relies on an ion exchange process to remove calcium and magnesium ions (2 most common ions causing hardness) by exchanging those with sodium ions from within salt brine. As such, softened water will not add salt (sodium chloride) to the water, but will increase the quantity of sodium (sodium bicarbonate) which will not typically result in the water tasting salty, but the amount of sodium will vary depending on the amount of hardness minerals to be removed. To remove sodium and many other contaminants for water to be consumed, a reverse osmosis system is often utilized.

Here is a link to a short write-up on salt free conditioners:. https://view.publitas.com/impact-water-products/2018-catalog-final/page/32-33

Sadly - regardless if a salt based softener actually adds salt to the system - my dad "THINKS" he tastes salt and wont have it in his house.


He wont eat the locally made beef snack sticks because he found out they contain 2% mustard and he "hates mustard" even though if he'd actually had one before he saw the 2% mustard in the ingredients list... he would have probably ate the whole bag.

Just like he hate sour cream even though we put it in our mashed potatoes (and have for decades) and he cant get enough of them and constantly asks how we get them so creamy tasting.

I'm well versed in RO systems from my time in the aquarium industry. i used to own a spectrapure commercial 1000gpd unit, as well as sell and service their homeowner grade products for use in reef systems.

I appreciate all the feedback and helping me understand this iron filter stuff before I waste a bunch of hard earned $ on snake oil.
Last edited: Dec 19, 2021

plant.one said:
sadly - regardless if a salt based softener actually adds salt to the system - my dad "THINKS" he tastes salt and wont have it in his house.
Click to expand...

If he doesn't think of potassium chloride as salt, that could be used to regenerate the water. It may add a taste (not sure), and it costs a lot more than sodium chloride.

If the problem were just actual taste of salt, the RO units will be a better feed for an RO than hard water. From logic alone, a salt-based softener producing soft water that will only be used for washing and feeding the RO would make sense. Then the RO unit would supply the drinking water. But as you say, perception is the real story here.

Anyway, peroxide would be a really good way to remove iron and H2S.

I'll support Reach4's endorsement of H2O2 for iron and sulfide removal. That's what I am using: Stenner pump injecting H2O3 into a contact tank (I have iron reducing bacteria which requires contact time) and a Fleck 7100SXT (older unit) backwash filter with carbon media. Use a Big Blue with 3-core 1 micron final filter. The BB filters need to be changed every several months or so. Solution tank gets refilled about every 10 months or so: I only need a mix of 6 parts water to 1 part H2O2 as my loading is light- iron only 2ppm.

I was looking real hard at using Katalox Lite in my backwash filter. This might be all that would be needed if there's no bacteria issues.

I wouldn't recommend doubling up on Big Blue filters. That would only double up on the number of filters you have to change. Concentrate on getting a backwash filter set up to do the majority of the work.

If you want quality water it's going to cost a bit. Food, Shelter and Water. <- I am willing to spend on water because it's a primary necessity. There's nothing like good/great water!

I'm waiting for my test right now. should have hard data in the next few weeks.

I haven't pulled the trigger on which iron system/media to use as of yet. that's what I'm here trying to sort out

We've been using the water all but untreated (other than a single 2x10) for decades now - we got the house in the early 80's and had the well re-done a few years afterward.

As adults - me and my brother have been slowly but surely trying to bring our parents into the 20th century one holiday at a time, and i decided this year was the year to get some water treatment done to save some maintenance/cleaning grief for them. mostly for mom, but yea - also so dad doesn't have to change filters and bleach the plumbing regularly, etc.

Heck - we got them onto streaming TV services last year for X-Mas, since broadband went down the road 2 or 3 years ago finally. My dad is still trying to figure out what time all his shows start and still hasn't figured out - its whenever he decides to sit down and watch them, and he's not stuck having to be home at 7:30 to watch __________ on Thursday lol
You must log in or register to reply here.

Looking for suggestions on my older system.