I looked through here but I didn't see the issue I'm having addressed here.

It was working fine until just this past few weeks. The water pressure has been dropping in the house and I was able to isolate it to the softener. When I by-pass the softener the pressure is great!

While trying to figure out what could be causing the drop in pressure I unscrewed the head from the structural tank. When I pulled off the head the media bed immediately expanded to about an inch above the top of the tank. Within an hour it was covering the top of the tank and the next day it was scattered all over the floor. 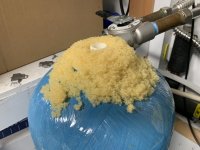 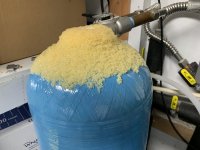 I contacted the place where I bought it and they have no idea and have forwarded these pictures to their distributor. I called Pentair and the guy there had no clue saying they don't support whole systems, just the individual components.

I read that chlorine in the water supply could damage the media but this stuff still feels fine to me. When I take a pinch of it and squeeze/roll in between my fingers it still feels like tiny balls. It doesn't feel like it's crumbling at all. And I don't think we have any excess chlorine in our city water. I could test it with my pool water test if that would be informative.

The water pressure is a nice 60 PSI coming in.

So, any ideas from anyone out there?

Thanks in advance!
Larry.

Very common. We see this with low grade resin mainly. As a 25+ year field technician, this was very common on the lower cost systems. I would recommend rep[lacing the resin with a good quality 10% crosslink resin.

Thanks for all of the replies both here and PM.

It seems that there was something in my municipal water supply that messed up my resin. I doubt I had 10% cross linked. I did get my water tested at my local pool supply and the water coming into my house currently has zero chlorine or chloramines.

I ordered some new 10% cross linked that should arrive next week (stuffs heavy so is shipped ground).

Do I need to also replace the riser tube with the basket at the bottom each time I replace the resin? I have not emptied my tank yet so I have not see the condition of the tube/basket.

Standard resin has 8% crosslinking. When the water is chlorinated, 10% crosslink will better tolerate constant chlorine exposure. Some online dealers will ship softeners with resin that has less than 8% crosslinking.

A pool supply is not in the potable water treatment business. Municipalities are required to add a disinfectant to ensure the water supply to multiple homes is safe from bacteria contamination. Chlorine is most common but Chloramine (chlorine and ammonia) is becoming popular as it does not breakdown as rapidly and supposedly creates fewer disinfection byproducts.

Whether the bottom basket requires replacement will be dependant on the quality of what you already have. If your softener was obtained from an online source, competition is fierce so shortcuts in quality are often taken so that dealer can undercut the other online competition. Fleck and Clack make quality bottom baskets whereas some of the cheaper junk can be easily crushed by hand. The bottom basket is the main protection from resin entering your home's plumbing system.

Also, food-grade silicone grease will be needed to lubricate the top of the riser tube where it enters the valve socket. The valve's threads and O ring should also be lubricated.

You may be able to re-use the gravel, if you had gravel.

Your city water should have some residual chlorine/chloromine. The pool test may not be sensitive enough.

Hmmm. I guess I'd better get my tank cleaned out tomorrow to see what I have inside there.

Thanks again everyone!
Larry.

A wet-dry shop vac could be useful.

If you don't have a funnel, look around for empty bleach bottle or whatever you can make a funnel out of to load the new resin.

Reach4 said:
A wet-dry shop vac could be useful.

If you don't have a funnel, look around for empty bleach bottle or whatever you can make a funnel out of to load the new resin.

Yep. I got two of them; a small portable one for work and my big one for home jobs! Couldn't live without them!

YIKES! I got my tank emptied and it was filled top to bottom with the resin! A bit of a messy job but not too bad.

The tube and basket appear to be in great condition but there was no gravel in the bottom.

Any recommendations on how much gravel I should add to the bottom of the tank before adding the resin?

Larry Schwarcz said:
Any recommendations on how much gravel I should add to the bottom of the tank before adding the resin?
Click to expand...

What kind of gravel do you have in mind?
Click to expand...

Fantastic! Thanks for the FAST reply!

https://terrylove.com/forums/index.php?threads/gravel-for-water-treatment-where-to-get.64016/ talks about getting gravel.

You might do some extra washing and bleach of the gravel.

I had a similar tank, and 1.5 cu ft was too much to leave the recommended headroom in the tank. Maybe the box was mislabeled, don't know what the problem was.

Mikey said:
I had a similar tank, and 1.5 cu ft was too much to leave the recommended headroom in the tank. Maybe the box was mislabeled, don't know what the problem was.
Click to expand...

I seem to recall asking Ditttohead why his chart specifies 1.35 cuft of resin when that tank size is commonly utilized for 1.5 cuft. I don't recall if that was answered.

Although the total tank volume specified will include the upper and bottom dome space, the domes are not to be included for media or freeboard calculations. Perhaps in practice, the domes are relied on when fitting 1.5 cuft + gravel.

Like I said, I don't know what the problem was, but the 1.5 cu ft carton definitely held more resin that I felt fit. Dittohead's chart 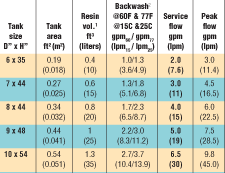 I think top baskets are more common than they used to be.

With Larry, I suspect the problem is not so much the amount of resin, but that that resin floated!
Last edited: Jul 26, 2019

The 10x54 tank is technically rated for 1.3 Cu. Ft. but everybody uses it for 1.5 ft3. When calculating the tanks capacities, we take the domes out of the equation for resin

I think my math is correct (close enough).

So, you're saying in general you only fill to 2/3 of the net capacity?

ditttohead said:
technically rated for 1.3 Cu. Ft. but everybody uses it for 1.5 ft3
Click to expand...


Mikey said:
So, you're saying in general you only fill to 2/3 of the net capacity?
Click to expand...

50% Freeboard = 50% of the media height. This will mean at least 1/3 of the tank is to remain empty to allow the resin column to lift and expand up to 50% during backwash.
You must log in or register to reply here.

When to replace carbon media for whole house system?