Terry often comments on the plumbing that he has seen in his travels around the world, so I thought I would share this item from the news today.

Russia is plainly capable of great engineering feats, as its aerospace and mining ndustries, for example, illustrate. However, I'm wondering about their plumbing and sanitation codes. The tweet reproduced below makes me curious as to whether there is just one big outflow pipe from the Olympic Village into some nearby river, and the powers that be didn't want toilet paper floating on top: 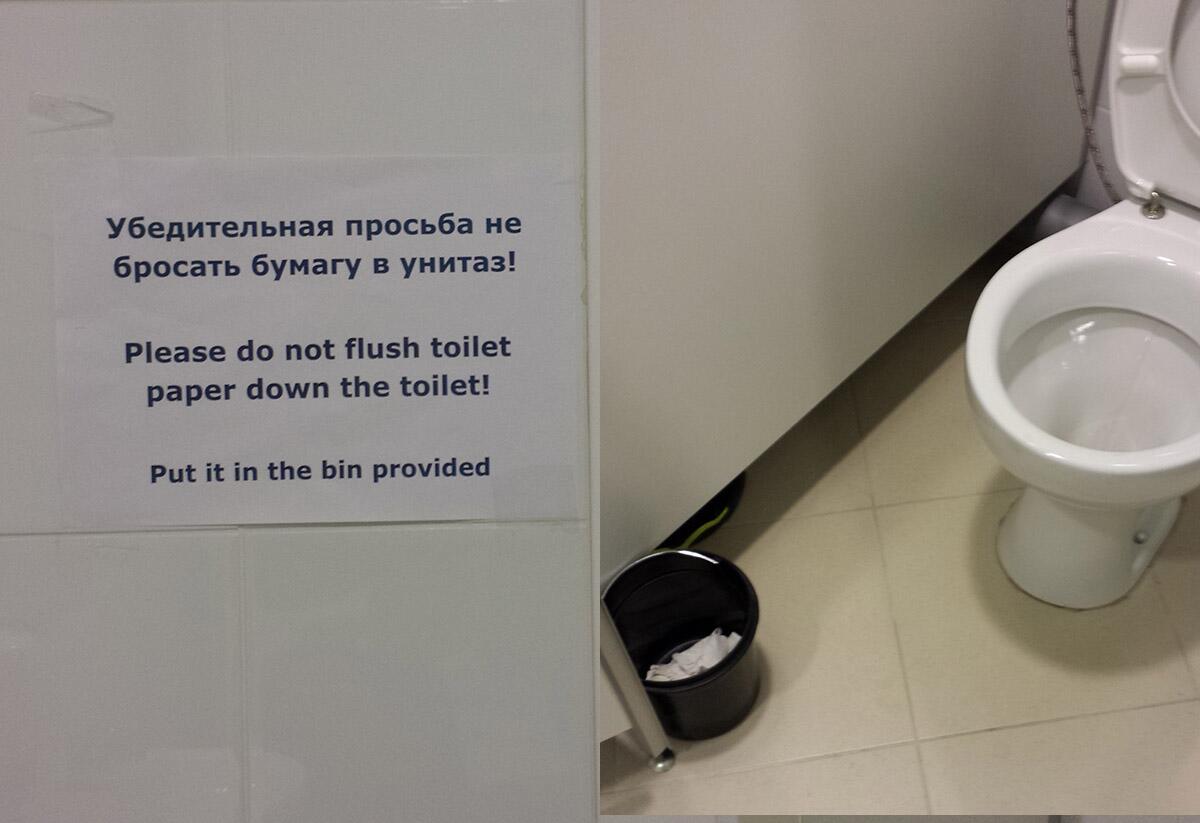 The Twitter poster, one Greg Wyshynski, says, "People have asked me what surprised me the most here in Sochi. It's this. Without question...it's...THIS."

I also thought the below sign in a public restroom had to be a joke, but it appears that it isn't (although I have my doubts given that the last frame in the sign is the guy wrestling with the Red X, I think, which goes beyond even toilet-fishing into complete silliness): 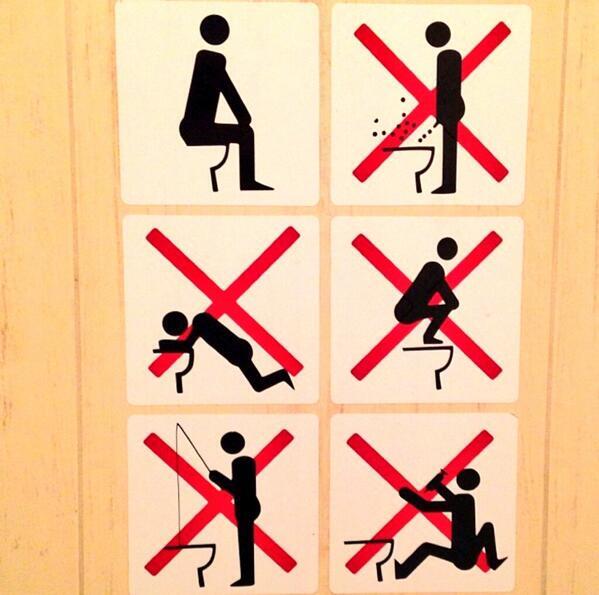 I thought they had 2 Toilets next to each other ?

Typically Toilet paper does not float.

There are many countries I've been to that have a basket near the toilet for the paper.
The US is unusual in that we use a lot of paper. Public bathrooms in many countries don't have paper in the stalls at all. You bring your own in, or buy it before you enter the bathroom.
In many Asian countries, people do squat on the seat. We had to break my grandson, part Korean, from standing on the seats. It all depends on what you have been taught, and what is availible.
In Belize, they didn't have seats on the toilet bowls. You had to "hover" over the bowl. And yes, the little basket for the paper near the toilet. No warm water in the shower either.

makes me curious as to whether there is just one big outflow pipe from the Olympic Village into some nearby river,
Click to expand...

Maybe.
The city of Victoria in British Columbia, Canada dumps raw sewage into Puget Sound across from Port Angeles.

wjcandee said:
I also thought the below sign in a public restroom had to be a joke, but apparently it isn't:
Click to expand...

The fishing one gives it away IMO... fake or at least intentional humor.

Reach4 said:
The fishing one gives it away IMO... fake or at least intentional humor.
Click to expand...

I don't think anyone has questioned that it seemed real to the olympic skiier who posted it; i.e. it's really on a wall there. However, how it got there is another question, and it may not be as official a sign as the first one I posted.

Most journalists commenting today seemed to assume that the "No Toilet Fishing" tile was real. And while the last tile seems clearly to be someone wrestling with the Red X, people have spent all day trying to decipher what it is.

And, pardon the coarse language, but the biggest amusement among the athletes who commented was the 2nd-row, 2nd-column tile, which they read as "No Upper Deckers" (but which Terry has explained as actually a reasonable request in an international environment).

I am also intrigued by RocketScientist's observation that toilet paper does not float. I had just assumed it did, after looking in our septic tank before it gets pumped.
Last edited: Feb 5, 2014

wjcandee said:
Most journalists commenting today seemed to assume that the "No Toilet Fishing" tile was real. And while the last tile seems clearly to be someone wrestling with the Red X, people have spent all day trying to decipher what it is.
Click to expand...

I thought it said "no shooting up in here".

I have a hard time with the no-barfing one also. Where would they want that to go?

I think it's someone injecting drugs into their arm..???

jim mills said:
I think it's someone injecting drugs into their arm..???

You guys may well be right. It just seemed odd how the body envelops the X. Curious that they think Olympic athletes need to be proscribed from shooting up in a bathroom...

EDIT: I blew the photo up by 800 percent. These appear to be tiles on the wall. You guys are right, when blown up it is a big syringe in the stickman's right hand. Oy.

It is all a Joke.

The real sign say please do not Poop in Toilet.

In Russia they recycle used toilet paper, sometimes without disinfecting it, but who cares.

As a kid, we were only allowed one square...

Reach4 said:
I have a hard time with the no-barfing one also. Where would they want that to go?
Click to expand...

Oh, thanks. I though it meant don't drink from the bowl.

quote; I though it meant don't drink from the bowl

The "don't drink" sign is over the faucets, but when you see the water that comes out, you wouldn't want to anyway.

I see Russian Caviar Stocks falling in the near Future.

Maybe the Fish like Toilet paper? Picture that the next time you are dressing your toast points.... lol

I spent 6 weeks in Stalingrad in the mid 80's. The toilet facilities at the hotel were on par with what you would find at any Motel 6. I honestly didn't find the plumbing to be anywhere near as scary as it is just across the border in Mexico and miles better than it is in India and Pakistan. There are places in London, Ireland and Germany where the plumbing is not what we expect here. We have the best plumbing in the world.

My wife knows someone who is working there helping with the construction and he says that the work conditions are horrible and that foreign workers are being treated like crap.

Pumping waste untreated into the Ocean and Stream is so wrong when so much money will be make by these Olympics.

Obviously this technician didn't consult Terrylove.com on how to install the toilet seat:

I will be insisting that my friend install the below sign in her bar:

I had to laugh my ass off on that one.


It is nice to live where we have a old school outhouse, and a sears catalog.