Moving toilet - tie in and vent - before I cut the slab

Hello,
I'm in the process of a bathroom remodel where I am moving the main bath toilet. I'd like to tie into the drain at the guest bath toilet which is 5' 8" to the right. This is a septic system so let's assume the toilet drains are 4" (I'll find out when I bust it out). From the center of the new toilet to the existing vent line is a bit over 6'. I'm wanting to know if I'll need to add a vent tie in that goes up inside the new wall indicated in the picture, and over to the 2" line in existing wall.

If I do, not sure what kind of fitting inline that would be ? Some kind of 4" x 2" x 4" wye? Also, in breaking out the concrete run, I'm guessing I'll have to bust out the closet bend of the guest toilet to build the tie in from the new drain.

I am in an unincorporated area of Texas so not sure if that's UPC or IPC that TX goes by when no inspections are done.

Thanks for your help/advice! Love these forums!
RH
outside Austin 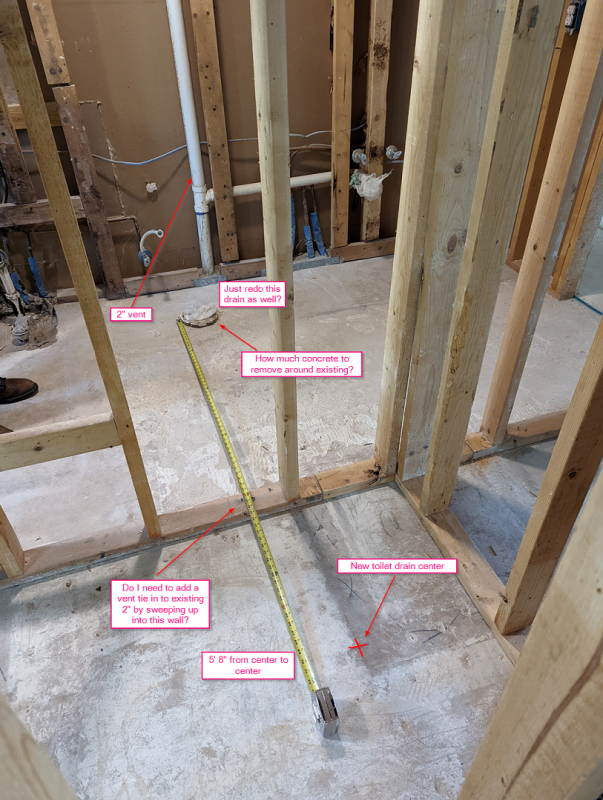 Russell Harris said:
I am in an unincorporated area of Texas so not sure if that's UPC or IPC that TX goes by when no inspections are done.
Click to expand...

You need to research that question and determine the answer before you can decide how to tie in.

Also, a diagram of all the existing drains and vents of both bathrooms would be required. If you're not sure what's under the slab, you'd need to take a best guess at it to come up with a plan, and then when you excavate, be ready to change your plan if what you find differs from your guess.

Well doing some checking, Texas is IPC except for Austin and maybe Houston. So we'll say IPC.

As far as the diagram, above slab, it's what you see in the pic. A shower to left, toilet in middle and vanity to right 2" vent in the center. Main drain line is hopefully running parallel to the wall out to the left, straight into the septic tank.
The main bath is exact duplicate out of frame to the left just perpendicular to guest bath.
RH

Sorry, I would need a diagram (floor plan) of both bathrooms, I can't place everything just from the one partial picture and the narrative. You need to consider the venting of all six fixtures in both baths.

One thing for sure is that the new lav will need a dry vent above floor (through the roof or an AAV if you are under the IPC), just like the existing lav has. So you may be able to use the main lav's dry vent to wet vent the main WC.

But most of the above is speculation without a diagram.

Ok, here's a stab, albeit poor, at a diagram. I obviously can't see in the slab but put yourself in 1985, and inexpensive home, doing it as simple as possible. Each bath has a 2" vent through the roof. One lavatory, toilet and tub/shower for each. Septic is straight shot out the back of the house. I drew dotted red line where I'm guessing things seem to line up with the cleanout which is in the same line as the main tub and all of the guest bath drains.

The floor plan is turned in the same orientation as I have in the picture. 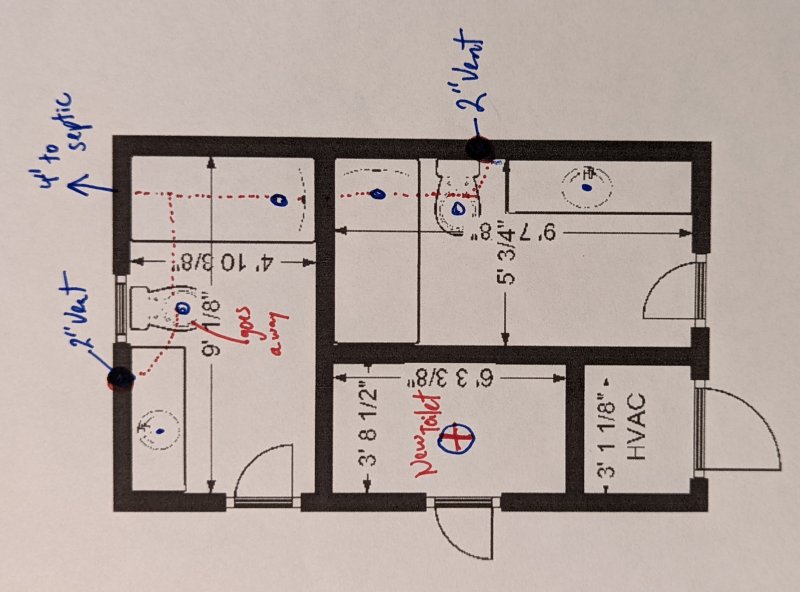 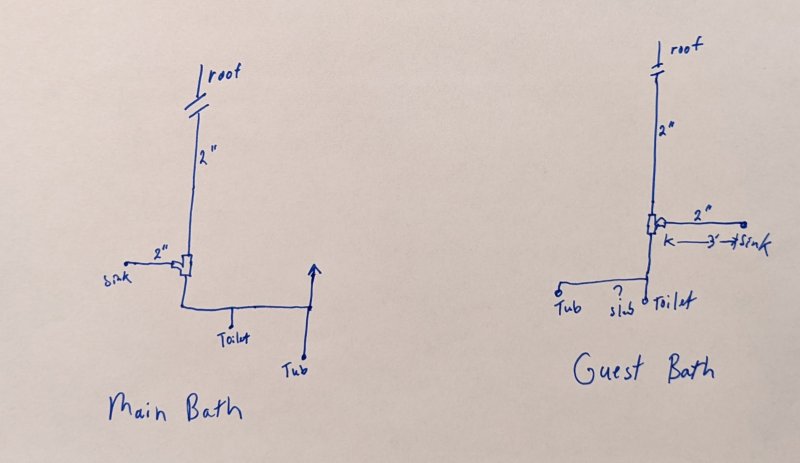 OK, that helps alot. So the only fixture that is moving is the toilet? If so, the IPC places no length limit on the toilet fixture drain before it is vented. That gives you two reasonable options:

1) Just run the new toilet drain back to the old toilet location. Pull the toilet from the old location and confirm looking down that there's a closet bend, not a combo or anything, and that the old drain runs generally to the left. Then you'd just have to trench from one location to the other, and tie in the extended toilet fixture drain.

That lets the guest lav wet vent both toilets, which the IPC allows. But the lav has to hit one toilet first, and then the combined drain has to hit the other toilet fixture drain. You can't combine the two toilet drains before you hit the lav drain. If for reason you really have to do your original suggestion, replace the guest bath closet bend with a 3" upright combo, you'd need to add the dry vent in the wall as you hypothesized, using an upright 3x3x1-1/2" (minimum) combo for the dry vent takeoff.

Thanks Wayne, this helps me greatly.

Your option #1 was actually the original plan. I asked a plumber who has done work for me before about this and he was saying that the distance from the old toilet location to the new location necessitated adding a vent tie in to one or the other vent stacks. Plus, I was thinking about all that concrete removal and how to avoid more than necessary. Then I looked over towards the guest bath and thought, oh shorter distance, maybe I can avoid the vent tie in. Most plumbers around here do work in Austin but I'm not sure people really think about IPC vs UPC?

Needless to say, trying to thread in the drain between the guest toilet and tub as you describe in Option #2 seems very hard and unknown. It's tight in that space. I'd rather go back to the longer run and just deal with a few more feet of concrete removal. It's about 9' or so between the two locations and I might be able to use a 22 degree bend to join the two. Straight shot is not possible due to framing in the way on the slab.
Here's a drawing of option #1. I did look down into the toilet drain and it does simply bend off towards the main line direction. I see no indication of any kind of a combo. Just a plain closet bend. If the IPC allows this distance without additional venting, then that's the ticket.

Thanks for the help!
Russell 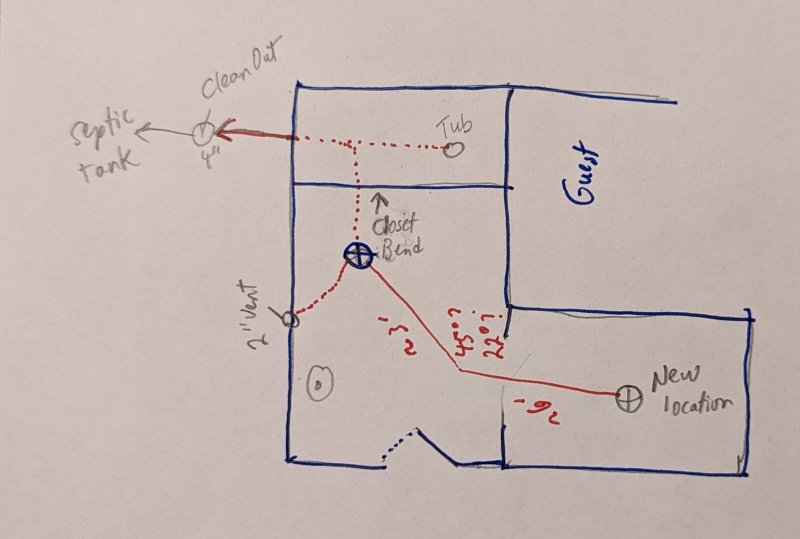 Yes, the IPC and UPC differ on how long the toilet fixture drain can be before venting. For the IPC it's unlimited; for the UPC, it's 6' starting from the closet flange.

So the plumber you spoke with gave you a UPC answer.

One last venting question I forgot to ask. On the main bath vent, I'm wanting to put in a window that would require jogging the vent line around it. Am I allowed to have up to 4 - 90 degree bend to get around the window? Moving the location in the roof isn't an option. 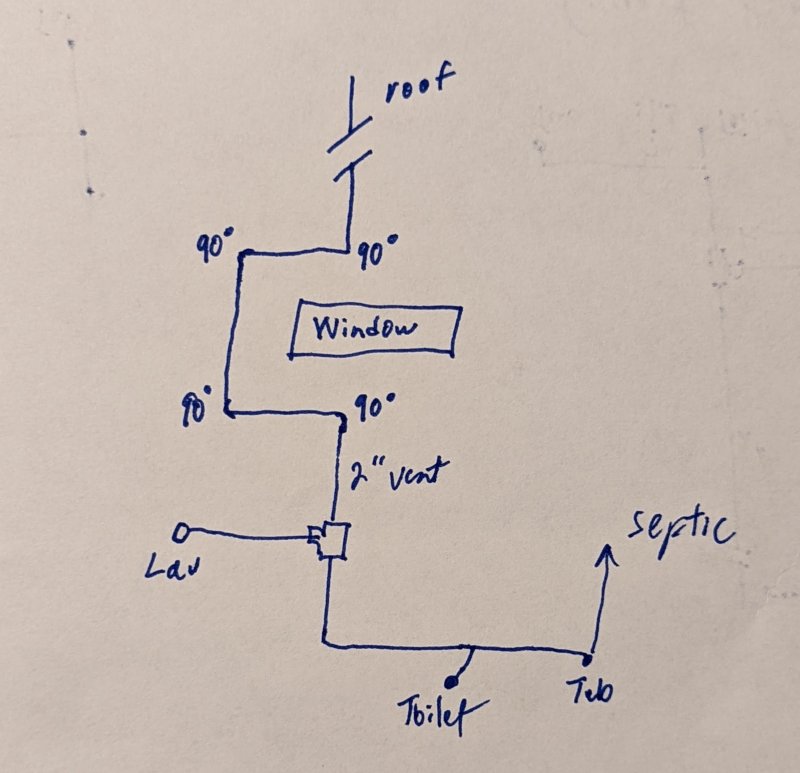 The limit on doing the above is that the horizontal sections of vent have to be at least 6" above the flood rim level of the lavatory. So as long as your window is high enough, no problem. If it's not high enough:

The way you've drawn it, the san-tee could be moved over to the left side of the window, eliminating the lower horizontal vent section. The drain could go horizontal above the slab to reach the existing slab entry.

Or you might be able to run the drain and vent at a 45 to get from the existing slab entry to out from under the window.

wwhitney said:
The limit on doing the above is that the horizontal sections of vent have to be at least 6" above the flood rim level of the lavatory. So as long as your window is high enough, no problem. If it's not high enough:

The way you've drawn it, the san-tee could be moved over to the left side of the window, eliminating the lower horizontal vent section. The drain could go horizontal above the slab to reach the existing slab entry.

Or you might be able to run the drain and vent at a 45 to get from the existing slab entry to out from under the window.

Another follow on question on this same vent change. On the upper horizontal section that is above the window, I need to put it above the ceiling on the top plate so I can maximize my window placement and still have a header. However up in the top plate area, I have a rafter/joist connection point (this is an outside wall) that I don't want to drill through both rafter and joist right where they sit on the top plate. Am I allowed to bump out the 2" vent to get around the rafter and then just go through only the ceiling joist to get to the roof upward path?
I drew the bump as a 22 deg or maybe 45 degree bump but does that matter? Could I just do some 90 degree turns to get from A (fixture side coming up) to B (roof)? As long as the air is flowing, are there rules about the number & type of fittings and turns it makes? Here's a crude drawing. I never learned perspective ;-)
Thanks again,
Russell 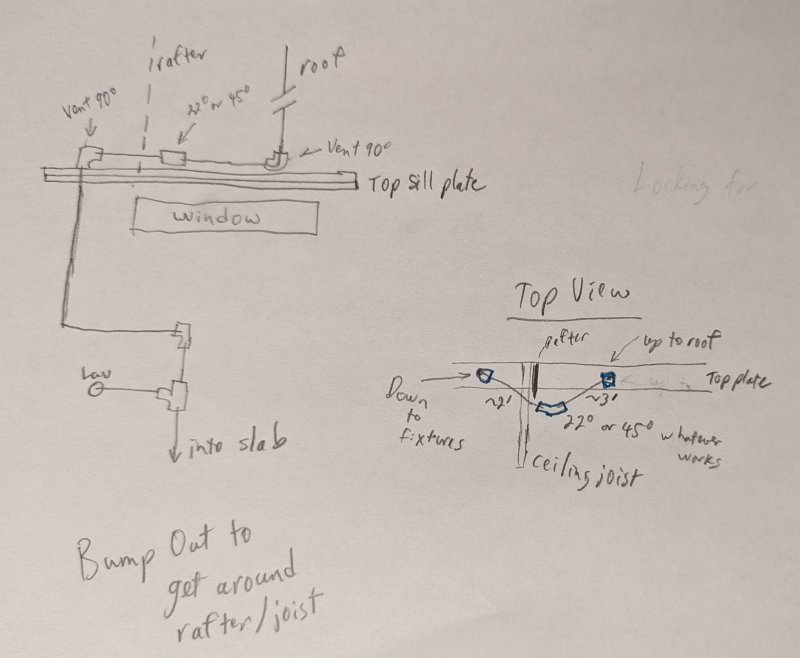 What you propose is fine as long as the vent path is all pitched to drain back to the kitchen sink drain. As rain will sometimes enter the top of the vent.

Or you could move the roof penetration.

Tub/shower to Shower conversion - before I dig