This past week, we (DIY) installed a Kohler Betello model Water Sense toilet to replace our once-new American Standard Hamilton one-piece 1.6 gpf toilet that we had installed in 1994 to replace an ancient (mid-20th century) 5 gpf toilet in the same space. The dinosaur toilet that we replaced in 1994 had been hard-plumbed (no flexible supply line) to our pipes, and was attached to the floor with four bolts arranged in a non-standard spacing; when we removed it in 1994, we found that a flangeless flush drain pipe stuck up from a much larger hole in the subfloor with no structure at all to which we could attach the American Standard, a void extending for a few inches around the pipe. We solved that problem then by filling the void with epoxy concrete and, before the wet concrete had set, burying two bolts, head down, 3" or 4" deep into it placed where the American Standard had to be set. That make-do solution provided a solid, wobble-free, and leak-free installation for a quarter-century, but it provided an interesting set of facts-on-the-ground facing installation of a new toilet in its place.

The American Standard Hamilton was a near-lowboy design, and we needed to replace it with an ADA height toilet. In another bathroom, we had installed an ADA height Toto Vespin II ten years ago, and the Vespin II has served us well; we have no complaints whatsoever as to the Vespin II. We of course considered replacing the 1994 Hamilton with another Vespin II, but, for a variety of small reasons, we decided instead to take a flyer on the new Kohler Betello, introduced earlier this year. The Betello appears to be the second model of a new series of Kohler toilets the first model of which, the Kohler Corbelle, was introduced in 2018. Compared, the Betello is taller (at the tank), skinnier (side-to-side), and curvier than the squarish Corbelle; otherwise, the two models are very similar.

Several friends have quizzed us of our toilet odyssey, and, rather that explain the process orally over and over again, I posted photos in a Smugmug gallery here: https://prime-ebc.smugmug.com/Replace-commode-2019-July/n-zCnGRS/i-WPsprDD There is excessive detail in the captions under the 14 photos for those with interest in minutia.

In Operation: We have used the Betello for less than a week, so our conclusions can be only preliminary. That said, we are happy with our choice. The Betello promises to be as satisfactory as the Vespin II has been.

What the gallery photos do not show is the noise performance. We do not have sophisticated noise measurement facilities, but we do have access to an iPhone with the NIOSH application on it. While acknowledging that the different environments where the Vespin II and the Betello are respectively installed may significantly influence sound level readings, and that hand-holding an iPhone at an angle where the screen can be observed while flushing a toilet is inherently subject to “windage” errors, several trial readings on the Vespin II and the Betello in their respective locations seem to indicate that the instantaneous peak noise level of the Betello is slightly higher than that of the Vespin II, but the duration of the near-peak noise level of the Vespin II is an order of magnitude longer than near-peak sound generated by the Betello. The levels referred to here are in the 73 dB to 79 dB range for instantaneous peak levels, and 60 dB to 65 dB for near-peak readings.

Bottom line: if you are considering alternatives to a modern Toto toilet, the Kohler Betello is worthy of consideration. 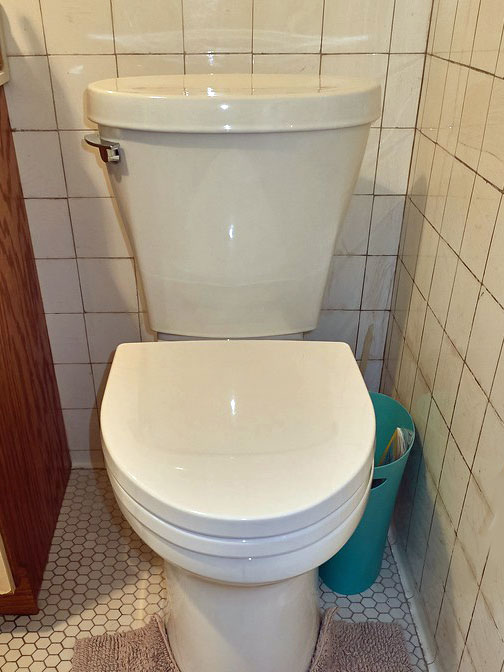 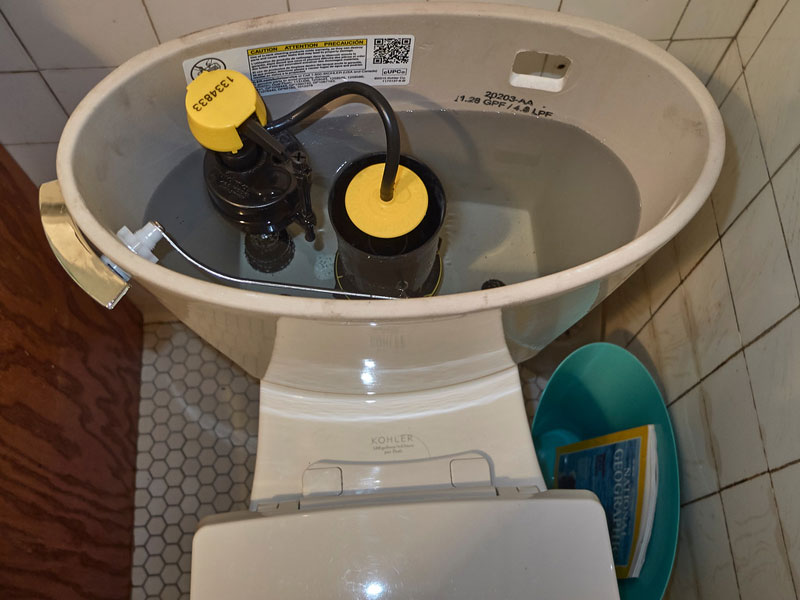 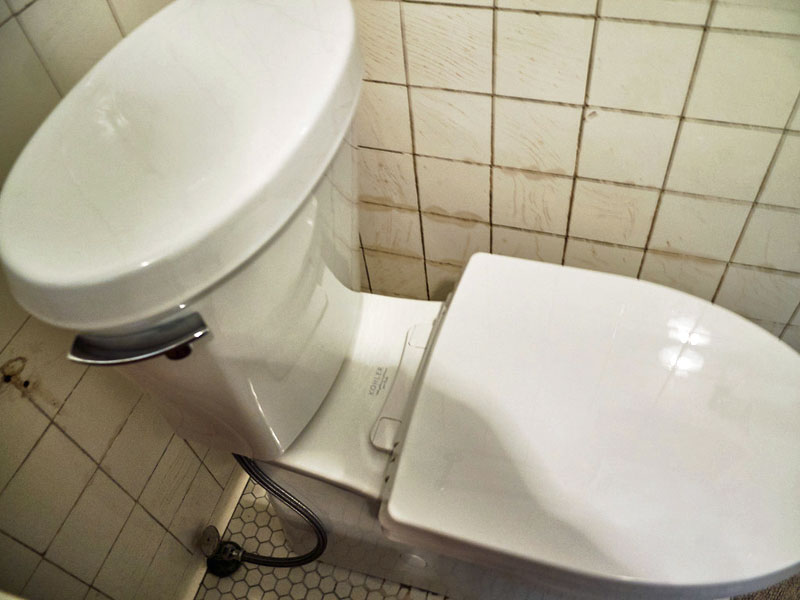 The toilet seat attached to the Kohler Betello is a Toto model that we purchased for the Vespin II when we originally bought the latter, but after we installed an Inax bidet seat on the Vespin II, the Toto seat had been in storage for several years (the French curve of the one-piece AS Hamilton precluded swapping it to that toilet); the Toto seat fits the Kohler Betello perfectly, but, as the photos show, the square corners at the rear make it a bit of a styling mismatch with the relentlessly oval Betello. 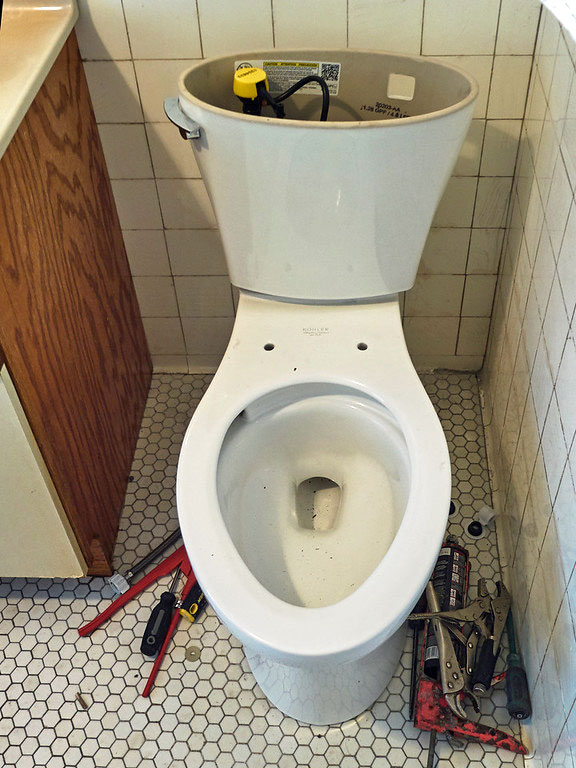 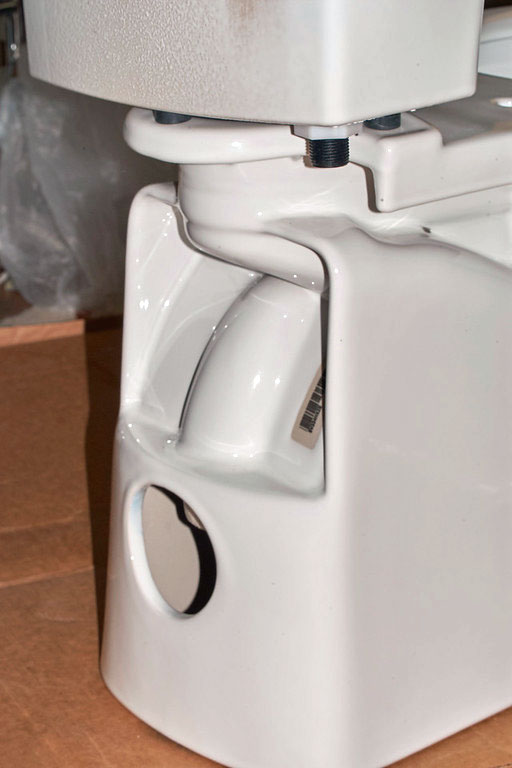 So far, the Kohler Betello (installed last July 29) has not only met, but exceeded, expectations.

With a long term opportunity to make comparisons and contrasts, we have compared its performance with our Toto Vespin II commode that is installed in our other bathroom. The Kohler has survived the challenge and come out on top in most aspects in which there is discernible difference in performance.

Speed of disposal of solid waste: the Vespin II, with Toto's "Tornado Flush" or "Dual Cyclone" design, always has been very quick and efficient in getting whatever is in the bowl down the drain; it is FAST, and fun to watch the efficient swirl. The Betello, with Kohler's "Revolution 360" flush valve, is visually and aurally FASTER than the Vespin II; the Betello is almost unbelievably fast. The Betello has only one location through which the water from the tank enters the bowl, whereas the Vespin II has two, but the Kohler gets ALL of the 1.28 gallons of water from the tank into the bowl so fast, my eyes are not quick enough to see any "swirl," or "vortex," or "cyclone" action; trip the flush lever and it is IN/OUT faster than one can observe how it did it. Working hypothesis: the funnel shape of the water tank in the Betello -- the tank is taller and narrower than the squat rectangular tank of the Kohler Corbelle, a sister model of the Betello; and the Betello tank is much narrower at the base than at the top, and oval shaped, with no internal corners or nooks and crannies for some of the water to get trapped -- gets some credit for the speed of the flush.

Noise: An iPhone sound meter app reveals that the Betello MAY be louder than the Vespin II, but it is difficult to conduct rigorously accurate and repeatable readings hand-holding an iPhone, and, subjectively, the nose levels between the two models are close, though the Vespin II's perhaps lower noise lasts a little bit longer.

"Tire tracks": We have never been dissatisfied with the frequency or, however it is called, the prominence, of "tire track" residue in the Vespin II bowl after a flush. But, as they say, "stuff" happens, and it occasionally has happened in the Vespin II. However, in seven months of use, we have not seen even one instance of "left behind" residue in the Betello; not one. Although we squirt some Clorox GreenWorks toilet bowl cleaner into the bowl periodically to keep it smelling fresh, we have not seen a need or a reason to use a brush on the inside of the bowl in all that time. We attribute that to the fact the the sides of the Betello bowl at the top of the water level seem to be more vertical at that point than the sides of the Vespin II's bowl walls at the top of the water spot. Whatever the reason, nothing at all visible has been left behind in the Betello after a flush.