Two days ago in 104* heat, I got my Grundfoss SQflex 6 pump in the well (by myself, with a rig set up that looks like the old Mouse Trap board game). My wife said it was too hot to get out, and there was nobody else available, so I hooked the T-handle and 1" poly pipe onto my Polaris Ranger, set up a portable roust-a-bout crane I have and rigged it to an old wheel from my truck for a roller over the casing. To be honest, as proud as I am of the set up, it looks like something out of a cartoon. But it worked great. I had to lower about 15' of pipe, walk out the 165' to the ranger, move it up over the T handle, walk back up to the casing, lower more pipe, repeat till done. When the T handle reached the well, I unhooked the wheel and hooked the choker to the T, then let it hang into the casing to run it down to the pitless adapter 41" down (24" below ground level.

I wanted to make sure the adapter was in place before pulling the T handle, so I had plugged the pitless in order to check from the outside that it was in and lined up. Since the well is artesian, this meant water running into the pit while I was checking it after pulling the plug. The back pressure caused a little drainage, but not much. After I knew it was good, I installed the last of the water line hook ups (from the T fitting to the pitless adapter). I had already installed the hydrant, the house and garden line and the utility/future shop line onto the T and just had to hook up the pitless to complete this.

I found that there was a little water dripping from the top of the inside of the pitless adapter while the T-handle was still attached (from the high static water level), but I needed to get the hose on so the pit didn't turn into a pool. After this it occurred to me that I now couldn't get my 2 1/16" socket onto the adapter nut to tighten it up. The outer seal was fine, so I came home for the night (30 miles away) and found a tool that worked. I have an open end wrenche for tightening the nut on toilet tanks that fit perfectly, and i got it snugged down tight.

I had one set back in the operation- I had ordered a 200' role of wire for the pump. The well is 180' and they hit water at 170'. I placed the pump at 165'. I knew i could use other wire above ground for the run to the solar panels, but with 35' of spare submersible wire, I went ahead and used that. Seems it took a little more than I figured, and I ended up about 25" short of the top of the casing. Fortunately, I had left a 3' pigtail at the end of the panel run, so i cut off 32" and spliced it to the well line 16" above the pitless, which at the time leaves the splice about 8" below static level (ground level presently). As much as I hate to add more splices into the line, I'll add another 2' of wire for slack at the top. Right now there's just enough.

The sun went behind the trees as I was finishing wiring the pump, so i had to wait till Sunday to go check it out. The panels weren't putting anything out due to the trees. Yesterday I got there later in the afternoon and flipped the breaker and turned on the Grundfoss CU200 and had 250w coming in. I opened up the hydrant (plugged the utility pipe and the 500' reel to the house/garden was sealed for shipping), and after a minute or so the hose on the hydrant was flowing at 5.5 gpm with cold, clear, sweet Ozark water. I have a 55 gallon marked barrel and timed it at 10 minutes to fill- twice. Then i found a milk jug and it timed at 10 seconds per gallon. Since this is a 6gpm pump, and the 700w of panels i have were only reading .25kw due to it being late afternoon and the panels sitting at winter angle, I was pretty impressed that i was even getting that much. Although I will say that when the sun dips behind a cloud, it drops to nearly no output.

Now that we have water to work with, I have to finish up our "other" 8kw solar system for the house and everything else. We will end up hooking up the well pump to that system when it's complete and the house is built, and transfer the 6 (of 8) 120w panels to the shop I'll build. I may end up adding batteries to the well later, but for now we're only at the property during the day, anyway. And the 'utility' line will feed a 250 cube tank with a float switch so we don't have to run the pump continuously, until we get the pressurized system going when the house is built. (I want to keep everything inside the utility area of the garage, so that will come later).

Anyway, after having the well drilled 2 years ago, the system is finally functional. I did re-shock the well yesterday after testing it, so I need to go down today and flush the chlorine out of it. I had shocked it once after blowing out the sediment with an air compressor, but since i did the install myself, the hose, wire and safety line were all dragged across the dusty ground. I had my hands full just doing the job, so my intention to have a towel handy to wipe off any dirt didn't happen. Fortunately, the dirt is very fine talc-like dust. Not much on there.

I'm adding a few pics, just to show how ridiculous my set up looked. Our earth home (soil over roof and 3 sides) will sit 40' soOth of the well head, toward the side by side in the pics. Thanks for all the help and advice on this, folks! I don't think i could have done it without this forum. I'll be back when it's time to connect to the house and shop. Lee 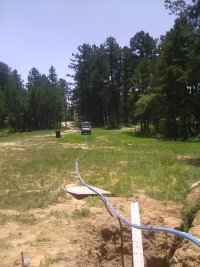 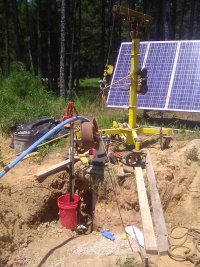 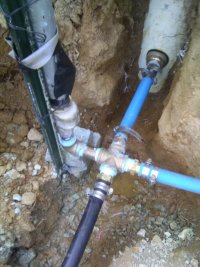 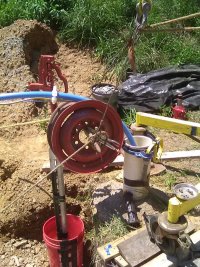 It may look ridiculous to you but to me it looks great. And you got your walking in for the day. Great job.

Nice job!
You must log in or register to reply here.

How are yard hydrants pressurized on the input side of a pressure tank?

What size submersible well pump & motor do I need?

Flushed out the well pipe yesterday. Ready to finally install the pump.