My wife and I recently bought a 1956 ranch home, complete with the "Cadillac of toilets," a Case 1000 lowboy. I purchased a complete replacement part kit, and after quite a bit of work, got everything installed and functioning. Let me say that while moderately handy, I am completely green at plumbing - let alone 60+ year old plumbing. I also freely admit that my biggest mistake was throwing away all of the original parts before troubleshooting to see about replacing only what I needed to - this lead to my "creative" trip lever connection shown below. Even still, the flush action is smooth, and the tank ball sits squarely after the tank drains; the ballcock closes the flush valve after the tank is full.

That said, I'm having a couple issues with the diverter valve: the first is that water is constantly flowing to the rim holes as the tank is refilling, even after the bowl itself is full. This causes a long (and expensive) tank refill time, as the now over-filled bowl is constantly emptying as well. I should note here that I know it's the rim, as before I turned it back on, I poured water through both the siphon (visible just below and behind the flush valve in the first picture, and at the back of the tank in the second picture), as well as where the diverter connects to the front side of the tank: the water came from the rim, confirming it's being fed from the diverter during the refill.

I've adjusted the screws as described below: 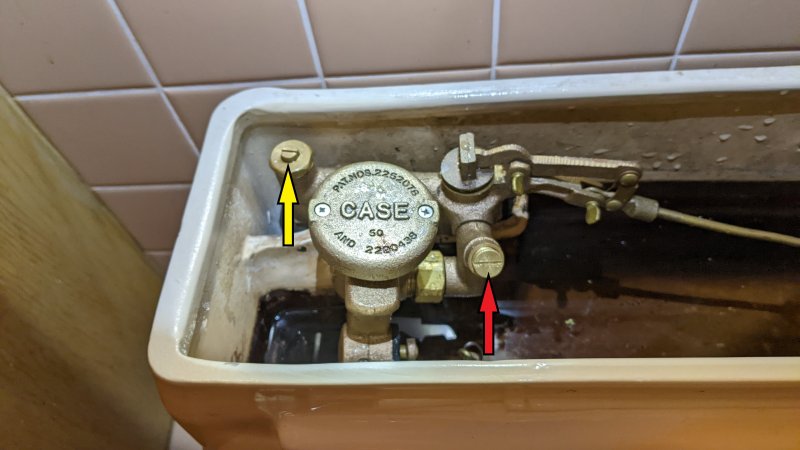 I did read that these two screws should be adjusted in tandem to solve my issue: if that's the case (pun completely intended), I haven't yet found the correct combination of screw positions to solve this first problem. Currently I have the yellow all the way open, and the red about halfway between open and closed.

The second problem I'm having is that at the end of the tank refill, as the brass arm and ballcock are slowly closing the flush valve, water pours from the underside of the top diverter "cap." The water runs down the backside of that casing and tube here: 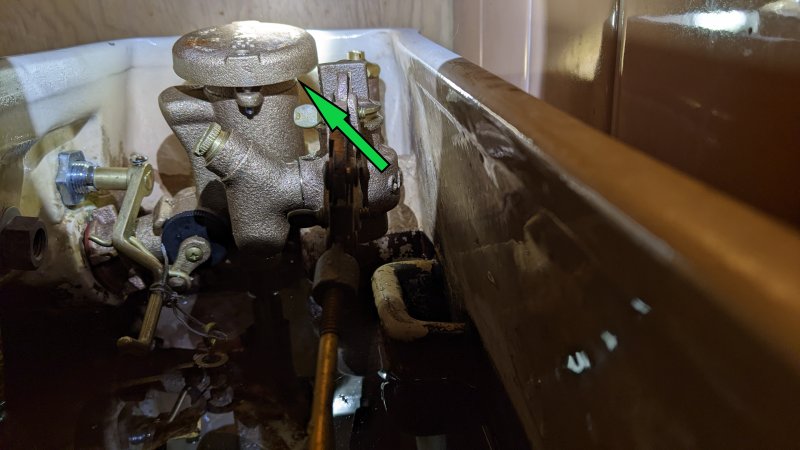 I'm also under the impression that the diverter assembly operates under a vacuum. If that's true, I've broken that seal and introduced air into the system: I've removed the red screw completely, and looked inside the casing. I could be off base there though, and me having removed that screw had no negative effect.

Any suggestions as to how I get the bowl to stop being constantly fed water during the tank refill, and how to stop water from gushing out from under the top of the diverter? Thank you very much in advance, and I'm happy to provide more info, photos, or videos upon request!

I've seen these, but never worked on them. I replaced a similar toilet and the homeowner frantically called me later to see if I had discarded the old toilet because he needed the parts to keep the remaining lowboy toilet working. Fortunately I had not and was able to salvage those parts for him.

Tuttles Revenge said:
I've seen these, but never worked on them. I replaced a similar toilet and the homeowner frantically called me later to see if I had discarded the old toilet because he needed the parts to keep the remaining lowboy toilet working. Fortunately I had not and was able to salvage those parts for him.
Click to expand...

Apologies for the delayed follow up - I appreciate you chiming in, maybe another member will have some additional insight!

#1 Water Level too low. Turn water off supply. Adjust rod with Float ball attached by bending rod to proper water level. NOTE: Do this off the assembly or linkage as not to damage linkage, attach rod and float, turn water on and check level. If not at proper level repeat.

#2 Lever Doesn't Stay Down to Allow Toilet to Flush by It's Self. There are TWO (2) adjustment screws on your assembly. The first one (which is a small screw located on the back left of the assembly) adjusts the pressure or flow of water coming into your toilet from your shut off valve, located at wall under toilet. this screw should be almost all the way out allowing full water pressure to enter tank. I believe these screws were used when pressure regulators were not installed on houses to regulate city water pressure. Anyway, the larger screw located close to what the terminology calls the Diverter Valve allows the city water pressure to come into Bowl along with Stored water as in a common toilet. If the adjustment screw is screwed all the way in there is no pressure or City water going to BOWL when flushed. Screw this adjustment out or counter clockwise maybe 1 or 2 turns. If everything is adjusted correctly, Linkage that is, a firm quick push on the Flush lever should open Diverter valve and hold Triple Seal Ball Cock Valve open (or Lets call it a Flapper Ball Seal Valve to us common folks) for a few seconds to allow Tank water to enter Bowl. Voila, hopefully a signature Case complete flush.

#3 Tank Ball Seal Alignment. There is a white plastic tube or guide (old style, now it is clear plastic) that fits inside the BRASS Triple Seal Ball Cock Assembly at the top where you install the guide wire to connect to the rubber stopper. If this is missing or got knocked out with installation, the Tank Seal Ball will not seal off the tank allowing water to run constantly. The plastic guide allows correct alignment for rod to seal ball to tank seal. Also there is a screw at the bottom of the arm that guides the rod, that connects every thing on that assembly to the tank seal. That should be aligned and tight.

#4 Water Seeps Into Tank After Float Valve Shuts Off. This is a problem every one seems to have. If every thing is installed and aligned correctly meaning all seals are snug at Tank level and nothing is leaking by, Triple Seal Ball Cock Valve ( Flapper Ball Seal Valve Assembly), Then the only thing left is the Float Shut Off Valve. This seems to be happening with all these NEW ROUGH CAST BRASS, QUOTE USA PARTS. I'M SORRY IF I'M STEPPING ON ANY ONE'S TOES. In the past I've
had to use OLD PARTS with new to complete installation to my specifications because of Roughness of Cast, linkage holes to small or close tolerances, and the faulty shut off valves. I have to say though with this problem it will eventually correct it self once the float has enough water in the tank to force the rubber seal on fill valve to seat on the valve body seat. One way to check this is manually push down on valve or pick up float assembly linkage. If seepage stops its the valve if you still have seepage of water going to bowl its a seal on the TSBCA, or Flapper Ball Assembly, (what seals the tank water). Another way to check the Float Valve Assembly is once the Tank is Filled and it is seeping in to the bowl turn the Shut Off Valve to toilet OFF. If the problem stops-- Valve!! if not--!!! a seal on the You Know What THE TSBCA. Presently I'm having the same situation with a customer, Float Valve seepage. Will be replacing Float Valve and Valve Body Seat, Not complete assembly. Of course I could cut down water pressure I suppose and put a sign on the Bath Room Door. TOILET IS FILLING PLEASE TRY LATER.
You must log in or register to reply here.

Interesting GMax problem: won't fill all the way when water pressure is high

Symmons Shower Diverter too much water from tub spout

Tank leak into bowl after repair