I just today found this product, called Pumie, which is basically a pumice stone on a plastic handle. I was trying to remove an intractable stain/ring on a 40 year old toilet bowl. I had rehabbed the rest of the toilet, but nothing would get this ring off. Not toilet bowl cleaner, not bleach, not Magic Eraser, not Comet, not CLR, not anything. I was ready to go buy some muriatic acid when I saw this product. It claimed to remove stains that cleaners would not. So I tried it. It did to the stains basically what a magic eraser does to soap scum. Just removes them. It took about 10 minutes of scrubbing with the pumice stone, which dissolves slowly while you are scrubbing, so it conforms to whatever shape it's being rubbed against. I used about half of it to do the one toilet, then used the rest to start on a gross green stain on a bathtub that had been there for at least 30 years. Again, with a good deal of elbow grease, I got about half the stain off before I ran out of pumice. So I will be picking up a couple more. There maybe a reason that this was not a good idea, but given that the alternative was to throw the thing away, this seems like a good strategy. Apparently, it can remove some of the surface, so I would never use it on anything like CEFIONTECT, and I would test it on any colored porcelain in an unobtrusive place. But I was pretty impressed, and thought I would share it with you.

The full name is actually Pumie Toilet Bowl Ring Remover. When I was just researching, I see they have a kind of scouring pad as well, which I haven't tried.

(Edit: Geez, reading this thing sounds like one of those fake-endorsements that Terry is always having to remove, but this is really me, and I really did use it today...) 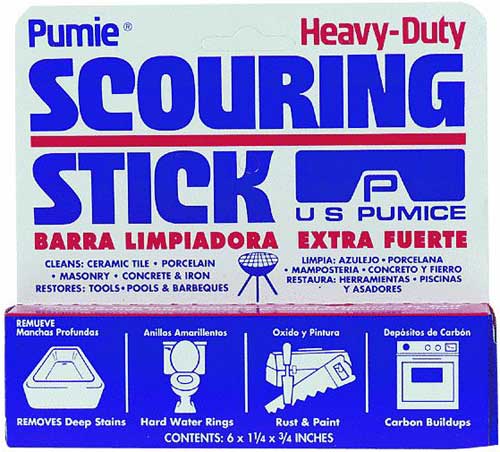 Last edited by a moderator: Jan 3, 2021
You must log in or register to reply here.

Does porcelain wear out and stain more?