Yet another slow drain with no clog

I assume the issue has to do with air and venting in some way but I have to admit, I can never wrap my head around where air is supposed to be and supposed to not be in drains. 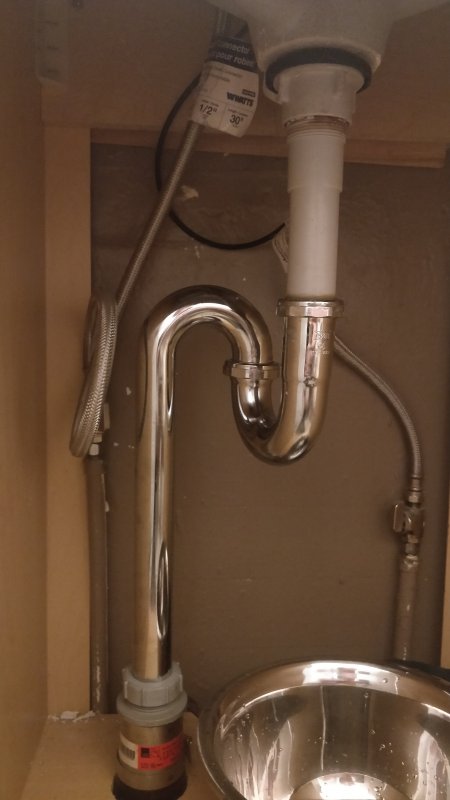 I opened up the trap and there was nothing clogging it and I could pour water down the drain into a bucket just fine. There's no sign of a clog anywhere in the stopper mechanism or the trap or the pipe continuing from the trap. So I guess pouring any more chemicals or hot water or whatever down the drain isn't going to help at all.

There is an overflow drain moulded into the sink so I assume air should be able to escape that way but perhaps that passage is clogged? But when I plunger it water happily spurts out the overflow just fine.

One thing that concerned me was that when I opened the trap there was no water in it. Isn't there supposed to be water sitting in the trap up to the level of the next bend?

I don't see any venting but I don't know where the pipe goes after it goes through the floor of the vanity. It may have venting in the wall where it connects to the main drain -- or it may not.

You have an S-trap, but that is not what is causing the slow draining.

How new is that drain in the sink, or is it new to you? I am suspecting that the drain is not the kind made to work with an overflow. That overflow doubles as a type of vent as well as a path for overflow water.

You tested water draining from the sink into the bucket. Which tells us that the stopper is not the issue. Water will not flow into the trap, which may be an indication that the drain is Plugged beyond the trap which won't allow any displacement. So nothing is going to get past that trap.

Tuttles Revenge said:
Plugged beyond the trap which won't allow any displacement. So nothing is going to get past that trap.
Click to expand...

Greg_, if you put the drain back together, and start filling the bowl, does the bowl fill up, or does it rise part way, and then clear the bool suddenly? I was picturing the second one, but I should not have.

It kind of seems like it drains ok for a few seconds and then once the water covers the drain it starts filling up. It then very slowly slowly drains. It doesn't empty quickly at any point.

So the only way I'm going to know if there's a blockage in the drain is by getting a big snake and poking randomly into the sewage system. I don't really like that plan ...

That's the problem with an S-trap-- it can siphon dry.


greg__ said:
So the only way I'm going to know if there's a blockage in the drain is by getting a big snake and poking randomly into the sewage system. I don't really like that plan ...
Click to expand...

It won't be random. You would loosen that white nut, and pull out the chrome piece. You would start there.

Is this over a basement, crawlspace, or slab? Maybe going in below would work.

I might consider putting a medium Brasscraft drain bladder on a garden hose down through that nut as far as it goes easily. Turn on the water. Have one person watch, and have the other ready to turn the spigot off.

Or run a snake down there. Expect the clog to be where the drainage changes from vertical to horizontal.

I had a clog under a lavatory.

I got a RIDGID PowerSpin Plus.

I powered it with a drill.

I bought it for a lavatory drain, and it worked great for me. I actually went through the 1-1/4 trap, and before I knew it, it had played out about 12 ft of snake, and the blockage several feet below the santee had been cleared. I was prepared to enter at the trap adapter on the santee, but thought I would try the lazy stay-dry top entry. I know it has limitations.

I only snaked through the trap in case it worked. I was expecting to have to do more disassembly. It was really handy to be able to run water during the snaking.
Last edited by a moderator: Jan 1, 2022

It's a clogged drain
Last edited by a moderator: Jan 1, 2022
You must log in or register to reply here.

Laundry tub backs up - vent is used by water softener

How to water test DWV?

Can you identify Loud Dishwasher drain noise from airgap?

Dishwasher Drain in island without sink