(Yet another) how do I install a tub/washer sink post...

So....I was hoping to add a sink in the garage next to my washing machine. Opened up the drywall to discover this...interesting...spaghetti of pipe. 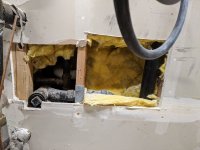 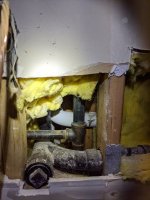 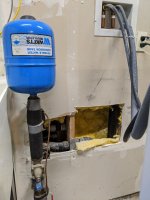 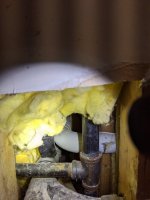 Black iron pipe in the pics is propane (in use, and I don't touch stuff that might blow me up, so it can't move). White pipe in the back is decommissioned whole-house vacuum and could be cut out.

Going straight back (away, parallel to the earth) from the cleanout is the line toward the main stack, it runs laterally at least 10 feet back that I can see. I can't see the bend where it goes down to the basement. Oh, and it's 21" from the floor....(I'm going to have to build something to raise the sink, and probably add a small step in front, I'm aware and grouchy about that) .

The sanitary tee behind the cleanout is the vent for the washer line (you can mostly make that out in the pics...behind the black iron pipe). There is pretty much zero wiggle room between the sanitee for the vent and the cleanout wye.

So....sanity check time. I'm ready to take a tee off the washer water lines and put a 5 gallon bucket under the sink at this point. (Covid=can't afford to hire a plumber, unless Terry wants to come make a charity trip to Camano Island )

I see 3 main options...and since I'm an amateur, I can't really tell what is best vs easiest (And especially unsure if #2 is even legal). I'm open to whatever other ideas people might have

1) Use the change in code that will allow me to plumb straight to the laundry stand pipe. I'd have figure out how to move the stand pipe to the left side of that stud bay and maintain the trap (because current distance would be like 40" laterally....unless someone can tell me the 30" is arbitrary and I'm not likely to get into trouble with it?) This feels simplest if I ignore the 30" lateral part of the rule.

2) Re-plumb both, cutting out from behind the vent forward. Route to a double fixture tee (or something like it) in the bay where the washer is (the studs in that bay are open behind them). Re-plumb to avoid went vent like all the pictures on the forum. (I'm not sure if this allowed in a horizontal orientation? I've only seen it vertically, but even then, maintaining correct slopes with this option may be outside my skill level). I've drawn an extremely crude picture here: 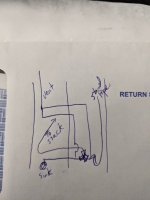 3) Cut out the in-wall trap and hook the sink to the waste line, use sink as washer drain. (This has the problem of navigating a 360 degree turn...ideas on that?

4) Is there any way to turn that cleanout into a drain stub? (I think not, but better to ask!)

Thank you to anyone patient enough to read this!!!
Jim

BONUS QUESTION: Any ideas about why would I have an expansion tank attached to the water main for the house? (you can just see the main shutoff ball valve at the bottom of that pile of plumbing). Any ideas? (I am not on a well, so that's not the issue...)

jim24 said:
Any ideas about why would I have an expansion tank attached to the water main for the house? (you can just see the main shutoff ball valve at the bottom of that pile of plumbing). Any ideas? (I am not on a well, so that's not the issue...)
Click to expand...

Chances are the need for the thermal expansion tank was recognized at the same time the PRV was installed. The plumber was already working there.

Oh my gosh, literal KISS solution. Will give this a shot this weekend. Thanks for slogging through my post!


James Henry said:
Remove the plug. Thread a slip female adapter on. Glue another combination wye and 1/8th bend on. Glue a female adapter on the end of that. Install the plug. Glue a trap adapter where you like. Give it a test run. If it doesn't work you can put back to the way it was.
Click to expand...

Haha glad to hear they were there! How would I know it needs tested/replaced? Everything I can find about them talks about for the hot water side.

If this was probably for a good reason, it at least makes up for some of the other insane stuff I've seen in the house (aka the hydronic heat that was running off a water heater when we moved in.....)


Reach4 said:
Chances are the need for the thermal expansion tank was recognized at the same time the PRV was installed. The plumber was already working there.
Click to expand...

Options for adding a sink to our laundry room...bit of sticky situation