Last night I was showering and heard a gurgling sound. I figured out that when I ran the shower that both toilets in the "Jack & Jill" (double) bathroom were gulping air from the bowl. When I tried flushing the toilet, it just filled with water and then slowly drained. I believe this all indicates that the main line has a partial clog, is filling with water, and is not able to pull air from the main vent. This results in the toilets turning into the vents and they gulp for air.

I have attached a sketch I drew of this bathroom's plumbing. I made this sketch when I did a recent bathroom remodel and this is actually the "before" sketch. The cast iron has all been replaced with PVC and the shower no longer has a 90-degree turn, but the basic layout is otherwise the same. This is a "wet vent" system and the 4" stack vents to the roof.

My first question is: does this most likely seem like a partial clog in the main line? Are there any other possibilities, such as a problem at the street (i.e., the city's problem)? I should note that there has been quite a bit of city plumbing being done in my area over the last year.

If the problem is indeed a partial clog in the main line, I believe the solution in this case is normally to get a camera inspection and snaking.

However, I'm wondering if an alternate approach would make more sense. When I did my recent remodel, I did not replace the 1960s cast iron main line that runs from my crawlspace to the street. I was planning on replacing the main line with PVC this winter or spring based on the logic that the the cast iron line had reached the end of its service life.

Consequently, I am wondering if I should simply replace my main sewer line now and not bother with an inspection or snaking. Since I was planning on the replacement anyway, I would save the $200 - $600 (guessing) on the camera inspection and snaking. For all I know, the inspection may reveal a partially collapsed line or some other catastrophic problem that would require replacing the main line anyway.

My second question is: is it possible to replace a partially clogged main line without first snaking it? I can imagine a situation where the clog has caused sewage backup and attempting to just remove and replace the line would cause a messy problem.

Any suggestions are welcome! Thanks for reading.

First try to find the outside clean out, usually a 4" cap.
For Florida, somewhere outside and probably buried under the floratam sod is a clean out. It usually be a no more than a few feet from the house and on the opposite side of the home where your water entrance is. Using a pitch fork you can stab the ground until you hit something. A CI drain system indicates its an old home probably built well before 1970 and not sure if a clean out was required. Sometimes you see one on the outside wall if the kitchen sink is located on an exterior wall.

Thanks, Worth. I do have an exterior cleanout and it is burried under the grass. I found it a couple of years back when installing a french drain in the yard.

I am guessing that you are suggesting to have a look inside the cleanout to see if it appears full of sewage, indicating that the blockage is in the main line and not accessible from the crawlspace?

I do have several cleanouts that I installed in the crawlspace when updating the plumbing last year.

Your diagram does not show a compliant horizontal wet vent. It could be compliant if if the (presumably dry vented) sink drain joined one of the two WC fixture drains upstream of the PVC wye, instead of going to the stack.

However, I have no idea if that non-compliance would cause the symptoms you are seeing, or if it would exacerbates the effects of a clog in your building drain.

Yes, using the outside clean out will determine in which direction the clog is.
More than ten years ago my next door neighbor was waiting for me to leave for work and intercepted me. His toilets wouldn't flush, etc. I opened the clean out, right next to the bathroom, we ran the garden hose down it with he water running and then we heard a gurgle. The clog was cleared. Mine you the hose will go toward the street because of the wye used.
Last edited: Nov 10, 2021

Thanks for the comments, wwhitney. If it matters, the "sink" in the diagram is actually not really labelled correctly; this is a drain line coming from the kitchen and utility (laundry). I've attached a photo below that shows what I mean.

I'd be surprised if the horizontal wet vent setup is responsible for the new gurgling toilet problem because the current configuration has been in place since the home was built in 1967, and after 6 years of ownership, I've never had this problem until last night. When I did the bathroom remodel I left the existing wet vent configuration in place but replaced any old cast iron with PVC. 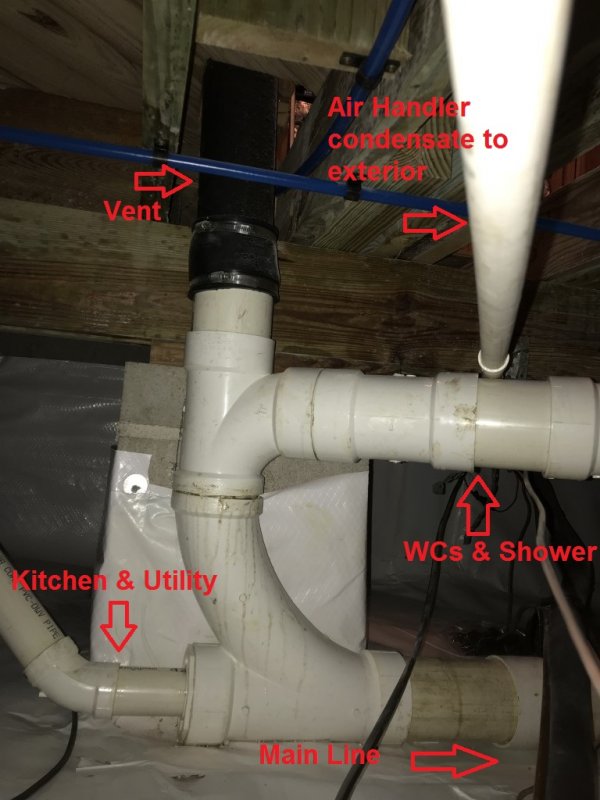 Ah. So you have two deficiencies that probably aren't related to your toilet gurgling. First, that rubber coupling in your picture should be a banded rubber coupling, Fernco Proflex, Mission Bandseal, or equivalent. The unbanded type is only for use underground.

Second, your layout combines three fixture drains before any of them are vented. Normally every fixture drain gets vented before (dry vent) or as (wet vent) it joins another drain. The IPC actually does allow you to join two fixture drains together, then provide a common dry vent for both of them, but not for three fixtures.

The simplest solution for that would be to to pull a dry vent off either of the WCs fixture drains before the wye where they join, with that vent rising vertically (up to 45 degrees off plumb) to 6" above WC flood rim and then rejoining the 4" stack (assuming it has no drainage from a floor above that). Or else rerouting a vented lav drain to similarly join one of the WCs and wet vent everything.

Just some suggestions for the next time you have to work on that DWV configuration. 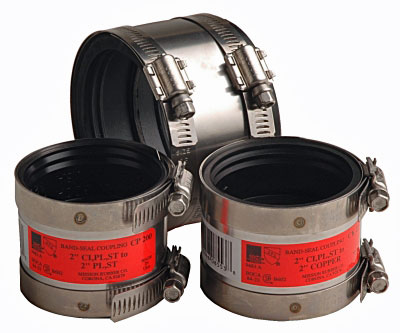 Bad plumbing job as Wayne pointed out, but I'd say you have a stoppage as well

Thanks again, Wayne. I should have mentioned that the photo I posted is a "before" photo. I am definitely not a pro plumber, but I did recognize that the unbanded rubber coupling had to go. I ended up replacing the entire cast iron stack with PVC and there is no longer a rubber coupling at all. So that's one deficiency taken care of

As for the three fixtures (two WCs and the shower) being connected before the dry vent: you caught a deficiency that the inspector did not! Or maybe he just didn't call it out since it was the original configuration from the 60s. In any case, I agree with you that this is probably not related to the gurgling.

Back to the gurgling: assuming that there is a partial clog in the main line, can anyone tell me if my proposed solution of forgoing the inspection/snaking and just replacing the main line makes sense? Can the main line be yanked out even if there is a clog, or does this create a hazardous situation for the plumbing company? I won't be doing that big job myself.

What if the blockage is right near the toilet ? , if kitchen and laundry run clear are you positive its downstream in the main? You might have a plugged toilet?

If you have a toilet auger, I'd consider just trying that first.

Try just flushing the toilet 3-4 times to see if it backs up, and note how many flushes it takes. If you know how much water the toilet uses/flush, you can do a fair estimate about how far away the clog is by converting those gallons to cubic inches and figure out the approximate distance away it is. One US gallon = 231 cubic inches.

jadnashua said:
If you have a toilet auger, I'd consider just trying that first.

Try just flushing the toilet 3-4 times to see if it backs up, and note how many flushes it takes. If you know how much water the toilet uses/flush, you can do a fair estimate about how far away the clog is by converting those gallons to cubic inches and figure out the approximate distance away it is. One US gallon = 231 cubic inches.
Click to expand...

Good tips for temp 945. Pretty basic he might not know what a closet auger is but its sort of a short snake up to 6 foot in length goes down toilet.
I'd say a tip would be run hose down utility or as much water as fast as you can and if no effect on toilet that's a sign the blockage is in the upper section and no need replacing main that wouldn't be doing any good.
If one or 2 flushes cause problem its in the upper section . 5 or more its down below the combi in the main. I don't know how approximate you get with the math but a simple calculation can get you a guess. If your underneath is easy to get to you could cut that 2 inch and stick a water bladder down (not that I'm crazy about the bladder but its very cheap like 10 bucks ).
I wouldn't replace a main that's never been known to back up and still isn't known to have a problem. On other hand we just grasp at straws guessing you might need complete sewer replacement out to the edge of pavement or curb.

Thanks for the suggestions. I opened one of the cleanouts that I installed (right below one of the WCs) and used a camera to look down the drain. There is no blockage before the stack, so the clog must be further down the main line. I have a couple of cleanouts installed in the crawlspace on the main line, but I don't want to open them and get sprayed in the face with sewage.

I was able to find the cleanout buried in the front yard and have called a plumber to snake the line. We'll see what happens!

Update: I didn't have a tool that would remove the seized plug cap so I just waited for the plumber to take it off. Once he had it off it was apparent that the clog was on the house side. He snaked the line to the house and removed the blockage. He then finished the job by snaking to the street - just to be thorough. Fixed!

Thanks everyone for your help!
Last edited: Nov 13, 2021
You must log in or register to reply here.

One toilet not flushing. Ideas??

Gurgle in Pipes 2nd Floor Tub and Basement Tub - Can issue be with blockage in basement?

Toilet is a Bidet