I'm replacing galvanized water lines and drains in an old house and one of the sinks has an old 2" galvanized vent running through the roof. The pipe broke somewhere in the wall and looks to be broken just before it reaches the roof. I don't have access to area where it broke, but I was able to remove the pipe from the wall (it literally just fell once I cut the tee behind the sink).

After I removed the pipe, I got on the roof to make sure there were no damages to the roof, boot, etc. From what I can tell, it looks like the 2" galvanized was connected to a 3" cast iron pipe. I assume there is a coupling here and this is likely where the break occurred. I can't really see much without tearing out the ceiling, which I really don't want to do.

Since I don't have access to the area where it broke, what options do I have to easily run a new PVC vent? Or do I even need to? Hopefully the photo helps explain the drainage layout. The left side of the drain is an old cast iron cleanout. The tee and the bathroom sink drain will also be replaced with PVC.

Any and all ideas welcome. Thanks! 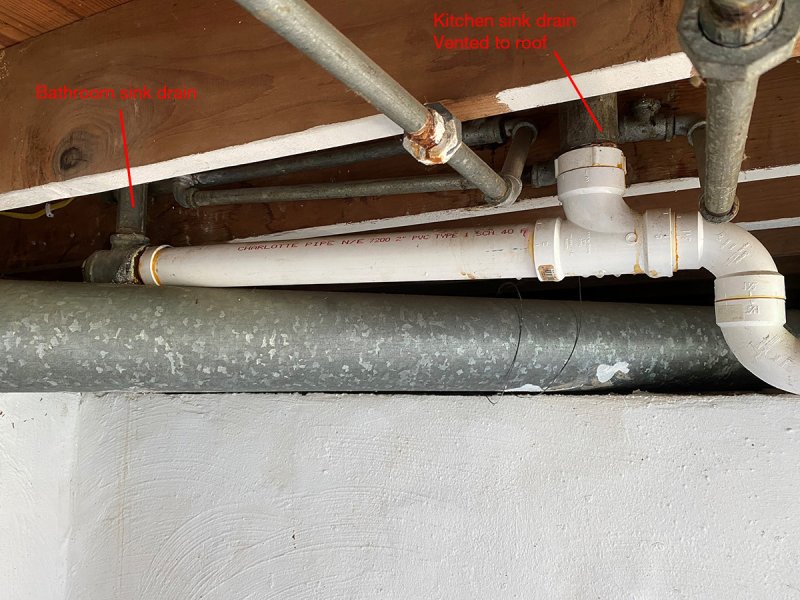 How many vents come through the roof? If the one you speak of is the only one then an AAV won't do because an atmospheric vent on the system is also required. There may also be issues with the total vent area through the roof to meet code and the particulars of your layout could play into a correct answer to your question.

There are a couple other vents in the roof, but I believe this is the only one for this section of the plumbing. The house is over 100 years old and this area was an addition. I'll plan to run a new vent to the roof.

Is there any way to avoid cutting the old cast iron pipe penetrating the roof and just run a new 2" PVC pipe inside of it? I'm assuming that's a no-no.

The roof section where the vent would go isn't flat, but it doesn't use traditional roof shingles and was roofed in a similar way a flat roof would be. I assume this was because the slope of the roof is minimal. I'm not entirely sure how to vent the drain easily without involving a roofing contractor, which isn't really in the budget right now.

The cast iron pipe is above the roof?
The galvanized is below the roof?
What goes through the roof?
Is there an attic?

Reach4 said:
The cast iron pipe is above the roof?
The galvanized is below the roof?
What goes through the roof?
Is there an attic?
Click to expand...

There is no attic. I would need to go back to the house to verify, but I believe it was vented like this:

I'm 99% sure the pipe above the roof is cast iron and the 2" galvanized was connected to the cast iron. I don't have access all the way to the roof from inside the house, but I could gain access if needed. I was hoping to avoid ripping out cabinets and the wall inside the kitchen.

Will replying to this thread "bump" it up a bit to get more views?

In response to the OP only:

- Your picture shows drains for two sinks, a lavatory and a kitchen sink. Which sink is associated with the broken vent? Or do the two sink dry vents combine with each other, and then the combined vent is broken before it goes through the roof?

- If there's a 3" vent opening through the roof, and the pipe below it connects to is broken, that means when it rains water will be entering your walls instead of the DWV. So you either need to repair the break or remove the roof vent (and make other venting arrangements for the two sinks).

- The PVC fittings on the right side of your picture show one improper fitting and an inefficient arrangement. The san-tee on its back isn't allowed for connecting a horizontal drain and a vertical drain with a horizontal outlet. For that you'd need a combo. The double 90s is also an inefficient way to make a horizontal offset, two 45s would be better.

You could address both issues by putting a 45 on the vertical drain, then joining that 45 drain with the horizontal drain with a wye, where the outlet is still at a 45, and then using another 45 to turn back to horizontal at the lower elevation.

Thanks for responding, Wayne. To answer your questions:

- The vent in only on the kitchen sink. The lavatory drain doesn't have a vent running to the roof (or any other venting). The lav drains to the right, tying into the drain for the kitchen, which is where the broken vent is located.

- I've covered the cast iron on the roof so there are no leaking concerns for now. I'm trying to determine if it's possible to run the new PVC drain inside that cast iron for now until I'm able to replace the roof (within the next 5 years). I'm hoping to avoid removing the cast iron for now because that would probably include hiring a roofing contractor and also tearing in the walls more than I hoped (which also requires removing some cabinets).

- Thanks for the note on the illegal san-tee. One of my next steps after replacing the water lines was to replace the galvanized drains, which means also replacing the PVC shown in the photo, so your comments are very helpful! I've attached another photo that shows a bit more of the PVC drain on the right side. Is your recommendation to replace the two 90's with two 45's?

jthurm said:
- The lavatory drain doesn't have a vent running to the roof (or any other venting).
Click to expand...

Are you sure about that? Each sink needs a vent, and for an isolated sink (not a double lav, say), that's basically always a dry vent or an AAV. So I'd expect a dry vent at the sink that is revented (connected above the fixture flood rims) to the main (kitchen sink) vent.

If it's actually not vented (the trap arm enters the wall and just hits an elbow to turn down into the piping pictured), then you need to add a vent, or an AAV if your state allows them.


jthurm said:
- Thanks for the note on the illegal san-tee. One of my next steps after replacing the water lines was to replace the galvanized drains, which means also replacing the PVC shown in the photo, so your comments are very helpful! I've attached another photo that shows a bit more of the PVC drain on the right side. Is your recommendation to replace the two 90's with two 45's?
Click to expand...

I gave you my recommendation. A more common solution would be to replace the san-tee with a combo, and each 90 with a 45.

How to align PVC pipe in cast hub with donut
2

Back to Back Sink Plumbing/Venting Help

Venting side by side bathrooms, and another bathroom a floor below
2