This is maybe for the HVAC forum, but essentially it's a plumbing question. I also wanted to get the broadest input possible. My question relates to how to accomplish a radiator replacement with minimal destruction to the room but to retain maximum functionality of the hydronic heating system.

Short Backround: Friend's house was substantially-remodeled 15 years ago. One wall of a big room is lined with French doors, with SunRads built into the wall between the doors. Each radiator was covered with wallboard and a decorative grate. The grate is narrower than the radiator, and the opening it covers does not permit access to where the purge valve would usually be located. There are 10 Sunrads between sets of French doors, and they collectively form a single heat zone with its own piping and pump. 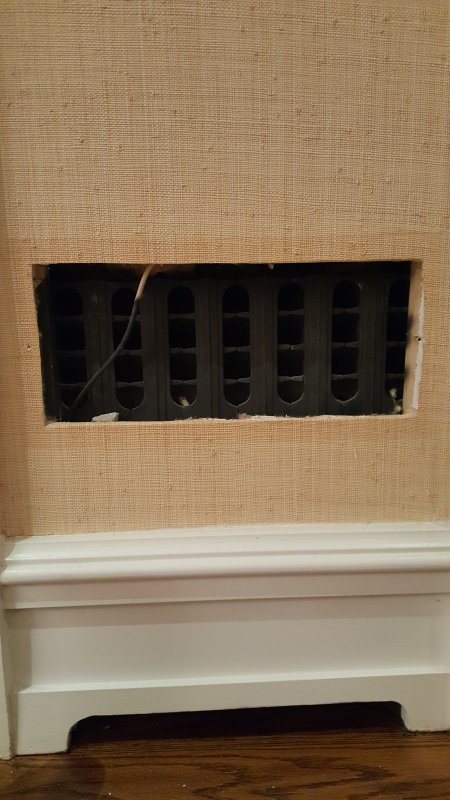 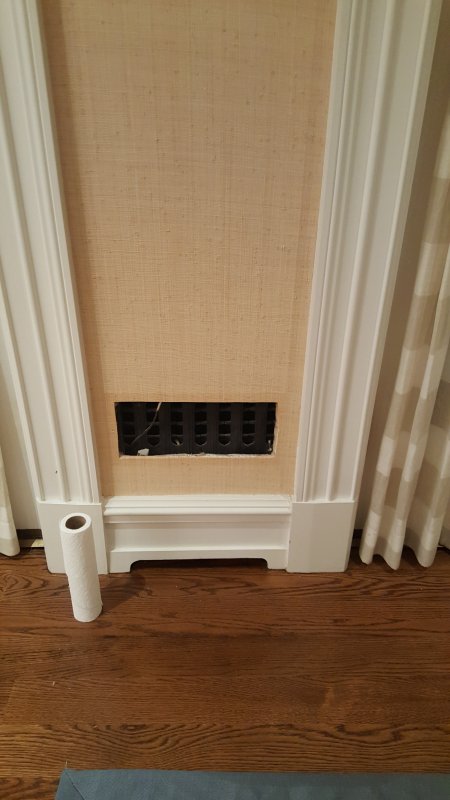 So of course now one radiator has cracked and was leaking all over the floor and needs to be replaced.

Obviously, we're going to have to destroy a section of this one wall to get the old radiator out and the new radiator in and re-plumbed, and then re-paint and re-wallpaper as best we can, and hopefully be able to restore the molding perfectly. I'm looking around for highly-skilled contractors to do that work. Because the plumber agrees that he doesn't want to just go to town on it with a Sawzall.

The bigger problem is that the plumber points out that replacing the radiator will necessarily introduce air to the system, and no matter how much purging they do from the equipment room, each radiator will end up with some air in it. Normally, they would just use the purge valve on each radiator, but those are not accessible without cutting the wall next to each one.

Either the designers planned never to purge the air from the system at the radiators, or they knew some fancy approach that I'm missing that they were planning to use.

Because all I can figure is that you would have to cut the wall at each radiator to access the purge valve, which is a crazy amount of work, and almost-impossible to restore so it looks right. To make matters worse, it appears that some of the locations have a radiator partially behind wood trim and not just behind wallboard.

So my general question is this: What would you pros do?

My more specific questions are: (1) is it possible to purge the other radiators without cutting the wall (by, for example, drilling into the radiator through the opening with the grill removed and resealing it or installing a purge valve accessible from the front)? (2) Is there some accepted method of getting the air out without doing anything actually at the radiator (some kind of pressure flush)? (3) would it be best just to leave well enough alone and accept that the radiators aren't going to perform at their rated capacity because they will have some air in them? (4) is there any special way to remove/reinstall the defective radiator that will introduce a minimal amount of air? One key fact is that these radiators are one zone, so there's nothing above or below them in the zone. These ones are it.

After replacing the cracked radiator ( why and how it's get cracked).. install a small elbow from air vent opening and run a tubing to access area for purging purpose, any reputable hydronic heating company know this "trick".
Also, with all that covering in front of radiator, defending the purpose of radiation. .
Since you are from New York, you can find good list of hydronic heating contractors at heatinghelp.com

Thank you! That was a good suggestion. Do you have any suggestion what to do with the other 10 radiators on this same zone that will get air in them when we replace this one?

The plumber we use has a whole heating group, and I expect that the next guy who comes will have a little more experience with this than the guy who came initially, although he was very knowledgeable.

To answer your question, the reason it cracked, I believe, is that on the exterior, the remodeler installed a frost-resistant hose bib in a little box, but didn't seal or insulate the box. (In fact, you can look through the grate and see light coming in from the cuts in the box on the exterior wall.) With the homeowner gone and the thermostat set to hold 55 degrees, with 18 degrees outside and a stiff wind on a sunny day, the room was warmed by the sun so the heating was off long enough for ice to form in the radiator from 18-degree wind blowing on it in the wall, resulting in a crack. Freezing also probably explains why there was no return water flow in the mechanical room, but a slow leak onto the floor under the one radiator. After we isolated the zone and the leaking stopped, I was amazed a few hours later to see a chunk of ice about the size and shape of a golf pencil had fallen onto the floor under the radiator in the 65-degree room. Saw it when shining a light into that little underneath area. Crazy.

I am aware that the installation isn't very efficient, but it's what was there when my friends moved in. It looks nice, but it's not the most efficient way to try to heat the room, for sure.

Every radiator must have access to be purged.. if others are the same as you are describing, feel inside the opening, there may be a purge tubing hanging.. also, I hope your friend go after the remodeler to covers his poor workmanship for the damage he caused.
You must log in or register to reply here.

Some Questions on Air Separators