My set up is configured as follows, a 360 foot submersible pump in the well, it pumps water straight up into a 3000 gallon black poly water tank,The submersible pump is switched on and off with some sort of electrode lower and upper limit system.

A typical inch and a quarter pipe comes from the bottom of the black tank and goes into the jet pump, Just passed the jet pump is the pressure switch, then a inch and a quarter pipe tees off and goes into the pressure tank, and finally after the tee there’s a hose bib, and then a ball valve and then the pipe continues on to supply numerous things.

Anyways, the local Well Repair guy, who I have used once before, I had to call them because I wasn’t home and I had a lady staying here with three horses and there was no water. Turns out it was just a screw loose, the well guy charges me 160 bucks for putting a screw into a box but that’s a separate story. Anyways he tells me I need a new pressure tank.

The Challenger series pressure tank sounds hollow all the way up the entire metal casing, I called Flexcon and they said due to the nature of their bladder, that is normal


I guess my final question is, is the well guy lying to me? I didn’t really ask him why he thought I need a new tank, but I don’t see what’s wrong with this one

If it sounds hollow, has 38 PSI air charge, and give 18 or so gallons it doesn't sound like a bad tank to me. A bad tank would be waterlogged and you pump would be cycling on/off rapidly. Losing a little pressure after shut off could be an indication that there maybe some water on top of the diaphragm or it could be a check valve leaking back.

"Out of water" usually means the overload has tripped. Even with such a large tank the pump will still cycle itself to death. Float valves in a horse trough can cycle a pump to death like running too few sprinklers. Even if the tank is bad you don't need to spend a thousand bucks. A Cycle Stop Valve with a 10 gallon size tank as comes in the PK1A kit cost about half that much, will give strong constant pressure to the house, and stop the destructive cycling that wears out pumps and breaks the diaphragms in tanks. Bet the pump guy isn't going to tell you about a CSV. Lol! 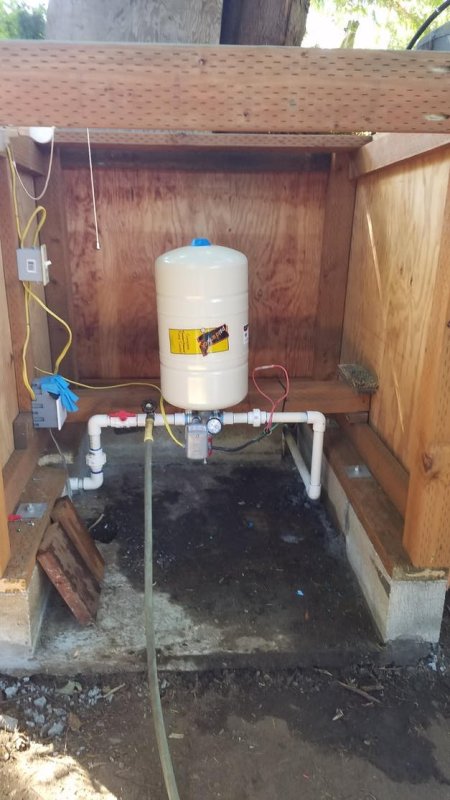 Without knowing why he thought that who could know if he's lying? Your tank could act normally for a while with just a broken diaphragm.

He probably squirted some water from the Schrader valve. But who knows unless you ask?

Yeah I don't think he is lying either. Could very well be a bad tank. If he/you had to let any air out to get it back to 38 PSI that is usually caused by a bad diaphragm. As more water gets on top of the diaphragm the air charge pressure increases. The only other way air charge pressure can increase is if you hook up an air compressor to the Schrader valve. But the Schrader is usually on top of the tank and no water will come out of it until the tank is completely waterlogged. Which, if that was the case you would not be getting 18 gallons out. However, you should be getting 21 gallons, so there maybe 3 gallons on top of the diaphragm. Might cause the pump to double bump and trip the overloads.

There are really only two kinds of bladder/diaphragm tanks working, those that have broken bladders/diaphragms or those that will have. Lol!

rockwind1 said:
I guess my final question is, is the well guy lying to me?
Click to expand...

Either yes, or not knowledgeable. Your tank is not defective.

The $160 to fix the system does not seem unreasonable to me, at all. He came prepared for a lot of possibilities.

Reach4 said:
Either yes, or not knowledgeable. Your tank is not defective.

The $160 to fix the system does not seem unreasonable to me, at all. He came prepared for a lot of possibilities.
Click to expand...

Agree about the money. Not about the tank.
You must log in or register to reply here.

Immediate loss of ~PSI when pump kicks off