LED Flood Lights tripping breaker when I turn them off

New member and first post. I know very little about electrical installations/repairs; looking on the web this site stood out. I need help solving the following problem.
All the lights in my house are LED and so far I never had a tripping problem regarding them. Then, my trusted electrician installed 3 LED flood lamps with the following specs: 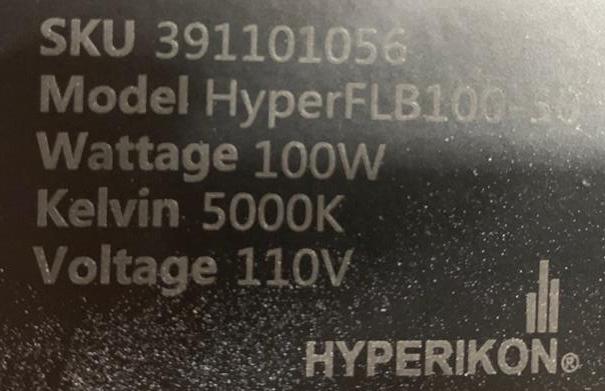 These lights are controlled by a Lutron PD-5S-DV switch.
The first troubleshooting step we did was to replace the Lutron with a standard rocker switch and the problem persisted. We then change the LED flood lamps to another line and again they tripped that breaker. In both cases, the load on the breaker was less than 5 amps.
It might be useful for you to know that when I moved to this house, my plasma TVs were tripping their respective breakers when I turned them off; I had to replace all the plasmas with OLED and the tripping stopped.
Your suggestions will be greatly appreciated.

Have you tried replacing the GFI breaker? Is GFI a code requirement in your area? If not, and there are no outdoor or wet locations served by that breaker, consider a non-GFI breaker.

Are the lights mechanically grounded with a good ground? Check.all the connections on that circuit for tightness.

LLigetfa said:
Have you tried replacing the GFI breaker? Is GFI a code requirement in your area? If not, and there are no outdoor or wet locations served by that breaker, consider a non-GFI breaker.
Click to expand...

Thanks so much for the quick reply.
We tried a non-GFI breaker and it did not trip.
The thing is that these flood lights are outdoor and of course get wet when it rains.

fitter30 said:
Are the lights mechanically grounded with a good ground? Check.all the connections on that circuit for tightness.
Click to expand...

I will. Thanks for the reply.

By the way, isn't the fact that the breaker only trips when you turn OFF the lights, something unusual? In my experience, I have only seen breakers trip when you turn something ON.

Gfi breaker is not only looking for a overload but a imbalance of 3 to 6 milliamps between hot and neutral.

ebl_pepe said:
By the way, isn't the fact that the breaker only trips when you turn OFF the lights, something unusual? In my experience, I have only seen breakers trip when you turn something ON.
Click to expand...

No, not unusual at all but some folks will argue it. I have had a miter saw trip a GFCI when turned off. The magnetic field collapsing on the coils induces a voltage similar to how an ignition coil works. Same thing happens to me with the solenoid on an electric brad nailer.

LLigetfa said:
No, not unusual at all but some folks will argue it. I have had a miter saw trip a GFCI when turned off. The magnetic field collapsing on the coils induces a voltage similar to how an ignition coil works. Same thing happens to me with the solenoid on an electric brad nailer.
Click to expand...

Makes a lot of sense. Thanks so much.

fitter30 said:
If the lights are the first thing on the circuit then change breaker to a standard breaker then feed the rest with a gfi receptacle
Click to expand...

Thanks for the reply. Sounds very much like what I am looking for.
Could you please be more specific? I need a more detailed explanation since my electrical knowledge is limited and I want to be sure I understood correctly before implementing this.

If a circuit breaker trips when the light switch is turned off, most likely, it’s a result of a common wiring mistake.

However, your picture seems to be showing a dual function GFCI/AFCI breaker (pink button). Do not confuse this with a combination AFCI breaker.

Since this seems to be a dual function AFCI/GFCI breaker it is very possible that there may be an arc fault in the line and probably at the light or switch when moved to the off position. If this is an arc fault causing this issue the only way to solve this problem is to find out what is causing the arc fault. The arc fault protection is trying to tell you something.

I would check your connections at the light source/s.

It's more common to get a spark when you break a circuit than when you initiate it. The current wants to keep flowing.

LEDs run off of DCvolts, so there's a rectifier/power supply probably in the light assembly or the bulb doing the conversion. They are not all created equal. It may work just fine with a different brand of bulb if they're replaceable. If it's an integrated lamp assembly, that won't help.

Is there a way to tell whether it is the GFCI, or the AFCI that tripped the breaker? That may guide you towards the solution.

ebl_pepe. What every one is stating is correct but just to give a clear picture and so others can learn.

Circuit breakers trip protect from overload or shorts.
Ground Fault Circuit Interrupter (receptacle) trips open the circuit at the receptacle when the current is not equal between the hot and neutral side through the GFCI.
Arc Fault Circuit Interrupter's are built into the circuit breaker. It causes the breaker to trip when and arc is detected. That could be a spike in the voltage or current that mimic's a wire arcing at a connection due to a loose connection or a wire sparking from a short but not long enough to trip the breaker. Apparently most home electrical fires are caused by arcing.

As Afjes stated your breaker has both GFCI, AFCI and over current protection in one breaker. Anyone of these protection circuits find a fault, it trips the circuit breaker lever. The problem is this breaker may not indicate what actually tripped the breaker. Some of these do but it seems that these do not.

As Afjes also stated, it could be a faulty ACFI in the breaker. When AFCI's first hit the market there were a lot of false tripping. My brother's home had a panel full of them the after a few years a simple vacuum cleaner would trip them. An OLED TV should not trip anything and a Jim stated, the power supply (a driver in the LED world) in LED lights and in the Plasma TV may have been spiking the line voltage when power is turned off. Plasma TV's took far more power, therefore a heater power supply. Depending on the design, many power supplies use a small coil (transformer) to lower the voltage before converting to DC power. When power is removed from a coil, back EMF is generated. That is as the magnetic field collapses, it generates a voltage but for a very short time. In high school electrical class it was how we were able to shock other classmates with a couple of flashlight batteries connected to a coil.

At the Square D web site (Schneider Electric), they have a chart on testing these breakers at the end of the instruction bullentin. https://www.se.com/us/en/download/document/HRB73152/. From these test procedures it takes about 2 seconds for the AFCI to trip, GFCI is immediate. If the breaker trips immediately when turning off the lights, GFCI fault is more susceptible. The fault can be in the wiring, a switch or the appliance? LLigetfa stated that he had a saw trip a GFCI when powering off, I also have seen that when turning off old florescent lights using an 100% iron core ballast.

I had a GFCI receptacle in my kitchen trip on occasion even when nothing was plugged in or turned on/off. Since it fed numerous receptacles, it took some troubleshooting to figure out which leg was bad. I did isolate it to one, and decided that it was easier to run a new line to that branch than replace it somewhere along its length. IOW, it could be a device, or it simply could be the fault in the wiring somewhere. I suspect it was either a too tight staple or crimped in a tight corner or something.

I'd probably try replacing the circuit breaker, or, if you have another that is the same, try swapping it out for another and see if the problem moves, or is resolved. That would help determine if it is the breaker or the fixtures themselves (or maybe associated wiring).

Both GFCI and AFCI devices when they first came out had problems with false trips (along with older equipment that appeared to be working correctly, but actually did have a GF in it).
You must log in or register to reply here.

Thought I had a bad GFCI but something else is going on - Help!