Kerdi shower leak test .. tiny bubble forming, where could it be from?

I'm currently doing a 24 hour leak test on my recently installed kerdi shower. I noticed that there is a small bubble forming that appears to be going through a kerdi band patch.

After removing the tiny pebble, I immediately put a square kerdi band to patch it and continued to waterproof the rest of the shower pan. I

Now, I'm doing a 24 hour leak test. Its probably been 4 - 5 hours now since the beginning of the test. I noticed a small bubble forming where I put the patch. The bubble eventually surfaces to the top of the water. It takes about 20-40 minutes to form (hard to tell exactly how long because I have to kneel by the shower pan and look at it for a long time).

I don't think this is normal. This is the only place where a bubble is forming. I don't quite understand why a bubble would form on the kerdi band patch. Shouldn't the kerdi band be completely waterproof?

So far, the level of the water has not gone down. I've been using Bostik Ditra-set as the thinset. I mixed 1 quart of water to 7.6923 lbs of Bostik Ditra-Set so that it would be "fairly fluid but still hold a notch".

In the image below, I drew a thin red arrow pointing to the bubble.

I tried to upload video but file is too large. So, for now, a jpg will have to do.

My questions are:
Thanks,
Raul 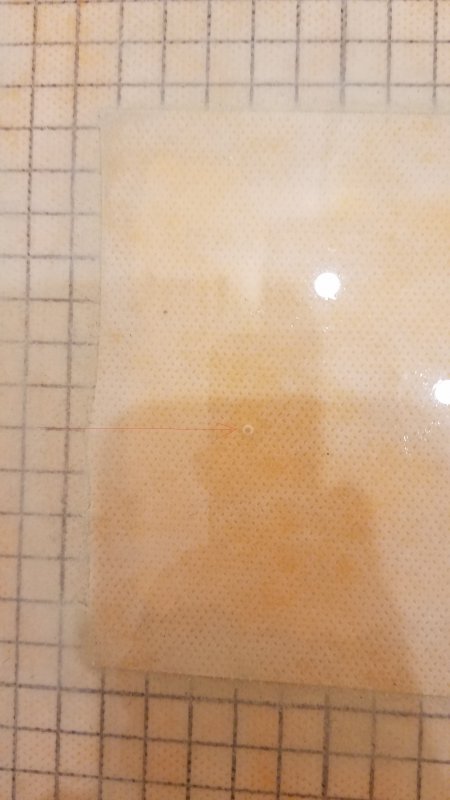 For videos you can only link to it such as You Tube.
You didn't mention what size is this bubble but nothing to worry about. You'll be putting down a layer of thin set and tile. After grouting and letting it cure for a few days, seal the grout with 511 Impregnator. I use it all the time and the quart I have is about eight years old. It goes a long way. I use it to seal granite around the kitchen sink and the marble tile floor in the shower. It's great stuff. For the shower I may use it three times a year after a good cleaning of soap scum, etc.

Thanks for the tip about the grout sealant. I will look into it.

The bubble gets to about a little larger than 1/8" before the bubble finally rises.

Please post some distant photos of your shower floor. Looks like pre-applied kerdi wallboard but you mentioned thinsetting kerdi sheeting directly to your sloped mudbed, correct? Did you allow it to cure for 24 hours or more? I've used kerdi membrane without any issues, but have never used the pre-applied kerdi foam.

If mine, I'd remove that patch, dry it out thoroughly and then thinset another slightly larger patch and let that cure for 48 hours before flood-testing.

What notched trowel did you use?

You don't want to squeegee out all of the thinset!

when cement cures, it literally grows interlocking crystals that get larger as the process progresses. How long did it sit before you flood tested?
You must log in or register to reply here.

Home Pressure Test, where does the water go if not a leak?

How long before you can flood a cement shower pan?

Water leaking into basement from shower