Kevinjm4 said:
First I will try and slope it up 45, but if I don’t have the room/elevation I’ll have to route it as you drew it up
Click to expand...

Some mathematical comments that may let you figure out ahead of time whether that will work:

So you can roll the wye up just 45 degrees. That gives you a 30 degree slope, which is considered adequate, but as seen from above your angle is only 35 degrees from the trap arm. The vent will move 1" towards the wall as it rises 1" vertically.

The upshot is that if your distance from the wall is less than your distance below the floor (possibly minus the pipe diameter, that bears a little thought), you should be able to use a wye rolled 45 degrees off a trap arm parallel to the wall. The vent will need a 60 degree bend to turn vertical into the wall.

A final important point is to point the trap u-bend towards the wall, and then point the trap elbow outlet at the desired direction. A 2" trap actually helps you here, as the u-bend is a little wider.

Sorry for the multiple blank replies I’m not sure how they are posting some of these. And I can’t figure how to delete
Last edited: Feb 18, 2022

Wayne I think I’m following you perfectly. See photos. Something like that?

Kevinjm4 said:
If I’m venting up both walls, here’s what I’ve gathered correct me where I’m wrong. Thanks!

heres my attempt based on what I’ve gathered. Check my work? Thanks!
Click to expand...

Reach4 said:
Perhaps you misunderstood the sketch. My new lines were in the horizontal plane (with the slight slope, of course).

I did not describe the trap. The trap will give some adjustability. But the point is that the trap arm went to the wall. The path got vented at the wall. Then the vented waste turned and went where it needed to get to.
Click to expand...

How about on the right side? Should the toilet just be 2” wet vented by vanity? Or is it a good idea to dry vent it up the wall then tie vanity into it?

wwhitney said:
That doesn't address the WC, so you route it under the joists near to the right hand wall to pull a 2" dry vent off it (with a combo, which could be rolled up to 45 degrees off vertical) that can rise up into the wall, within 6' of the closet flange, measured along the pipe. Within the wall the 2" WC dry vent and the 1-1/2" lav dry vent can join at a height at least 6" above the lav flood rim; if the distances work out, the two dry vents could be in the same stud bay, so you don't have to drill any studs (otherwise it would be easier to bring the 1-1/2" vent to the 2" vent, rather than vice versa).

Wayne, I asked in another reply but I suppose this is more appropriate because you already laid it out for me here. Specifically about venting the right side of the wall in this new setup we’ve been discussing today (vents in both left and right walls)... everything remains the same except the lav drain doesn’t cross the room, it would just drop into the 3” toilet waste line using a combo wye turned up 90, (if the drain is directly above the 3” drain line - which, is this the way to do it: Run the toilet directly below lav drain so lav drains straight into 3”?

Route the toilet waste toward the right wall initially, then 45 and then run directly beneath floor plate parallel, then picks up waste lav which is a straight drop into combo wye. Is wet vent for toilet in this case good, or should I dry vent both?

Kevinjm4 said:
Wayne I think I’m following you perfectly. See photos. Something like that?
Click to expand...

As for having the lav wet vent the WC, sure. The only reason my first drawing didn't do that is that you wanted the dry vents all in the right wall, so the lav needed to take care of wet venting those, rather than the WC.

For horizontal wet venting it is preferred to have the lav and WC join in a horizontal wye. So I'd suggest something like the drawing below. Where the exact configuration in the lower half of the page can be changed to what you need as far as dealing with the drains at the bottom of the page. Just illustrating that the tub joins the shower in a horizontal wye, as does the lav/WC. 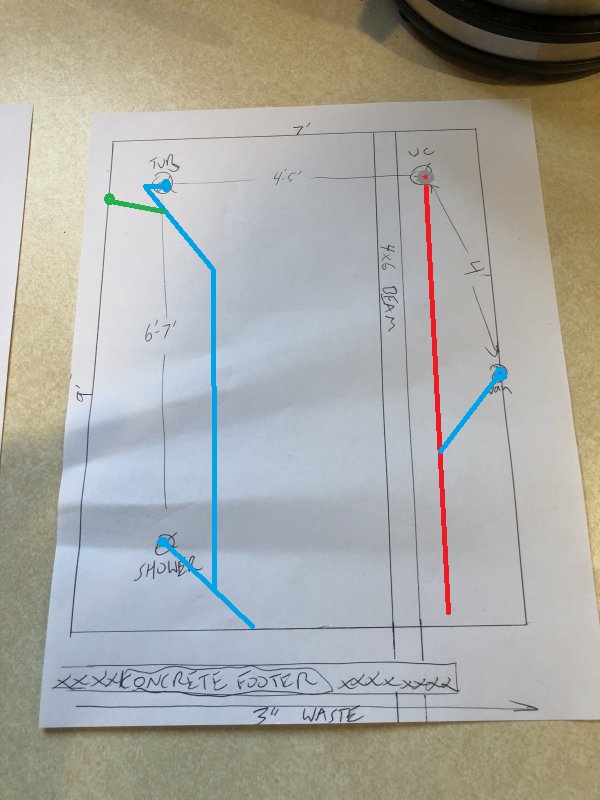