Connecting PVC to Cast Iron Elbow that is Tilted / Should I replace Cast Iron Pipes?

So this is a two part question. I'm doing a total gut and remodel on our small 3/4 bathroom in our house that was built in 1956. All of the plumbing is cast iron except for some repairs that I have made. The cast iron transitions to PVC outside of the house foundation and then runs to the septic tanks.

1. Should I replace the cast iron? I have seriously thought about just replacing all of the cast iron, but the pipes on this end of the house are buried under a slab for a portion of their run. They all interconnect under the slab and only one pipe exits the wall into the crawl space and then runs out another wall at the front of the house. I had a plumber out and he looked at it and gave me a quote of $10,000. It would cost about $500 just for a camera inspection. He said that cast iron could last up to 100 years in a crawl space, but only about 50 when underground. I'm not sure if that is true, but I wouldn't mind getting rid of the cast iron anyhow. I looked into jack hammering the floor and then found some videos on digging tunnels under the slab to do it correctly so as to avoid structural integrity issues down the road. The tunneling would probably be out of the question because I would have to tunnel about 30 feet to replace it all. The slab is 6' x 22' overall. See my crude sketch of my floor plan. In all of the videos that I watched the plumbers could only replace 70%-80% of the soil, so it seems to me that there would be structural problems eventually anyhow. My question is, should I rent a sewer camera and check for trench rot in the lines and possibly replace them since I have the lines open right now for the remodel? If they do need replaced, I could just replace the portion under the bathroom for now by cutting the concrete and digging (since I have to re-tile anyhow) and then cap the pipe that connects the bathroom to the laundry room. Then I could run my bathroom main line out the wall into the crawl space and connect back into the existing line (which would be converted to PVC too of course since it's easily accessible in the crawl space). This would only leave the laundry room on the cast iron pipe system. I will also add that at some point in the recent past the shower was converted to PVC as can be seen on the floor plan.

2. After reading and watching so much content on replacing cast iron and knowing my propensity to overdo everything that I work on, I abandoned my idea to replace all of the cast iron and just tie into it in the interest of getting the job done....that is of course now dependent on your feedback to my above question. In my attempt to try to just tie into the existing cast iron, I dismantled the old plumbing system above the slab and removed the galvanized pipes and replaced everything with PVC. I am now trying to tie the vent line into my sanitary tee for my sink and then into the floor cast iron elbow. The problem is that the cast iron elbow is tilted (I'm guessing it was for proper drainage) about 5 degrees. I bought a Fernco donut and installed it with the 1-1/2" PVC into the 2" cast iron elbow. As you can see from my photos, the PVC is considerably off plumb. I can bend it back straight but the donut puts a lot of pressure on it and a gap opens up on one side of the donut which could cause leaks in the event of a back-up or let sewer gas escape. It will also put considerable pressure on my vent pipe going up the wall unless I reinforce it. I have been to two different local plumbing supply stores and to two home improvement stores looking for shallow angle elbows to correct the tilt. I have purchased several degrees of common street and regular elbows but I cannot get it to work properly. My thought is to stub out the cast iron elbow with a short piece of PVC and then use elbows to try to keep the pipe as straight flowing as possible and also to get it back to plumb. The only problem is that to get a 5 degree pitch I would need two elbows that have a difference of about 5 degrees. If I use two 22.5 degree elbows I'm still going to be off 5 degrees. Tonight I also bought a flexible PVC connector if worse comes to worse and I have no other options left. I am just leery of those leaking over time due to dry rot. I have seen 11.25 and 15 degree PVC elbows online. I could combine a 22.5 and a 15 degree to get very close and I'm sure the slop in the fittings would allow me that extra 2.5 degree shift that I need. Or maybe a 15 and an 11.25 degree combination which would make up for 3.75 degrees of my 5 degree tilt. Well that is my problem and I have been all over looking for solutions to a problem that I am sure must be a common one. Surely you guys have dealt with similar issues before, but I can't find anything online or on this forum. What should I do? 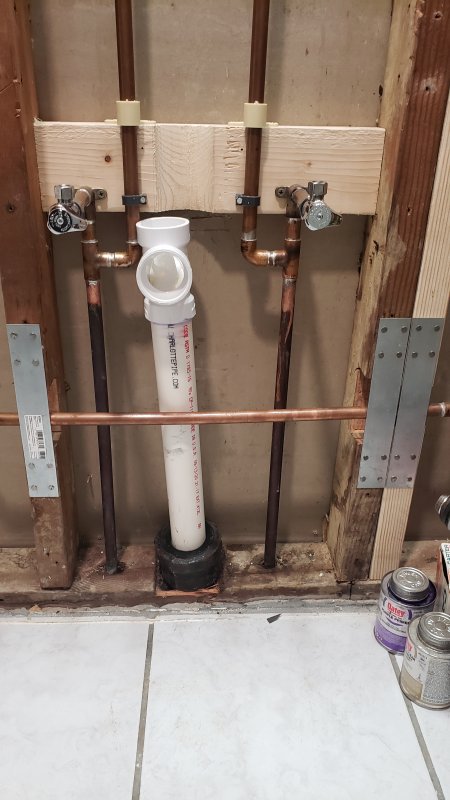 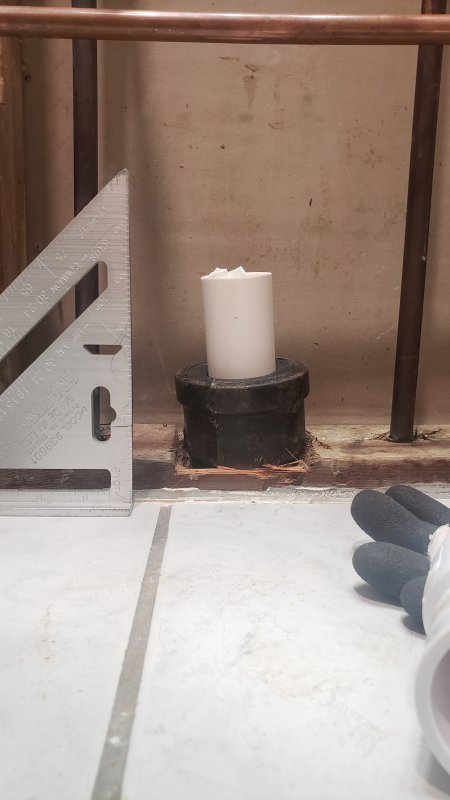 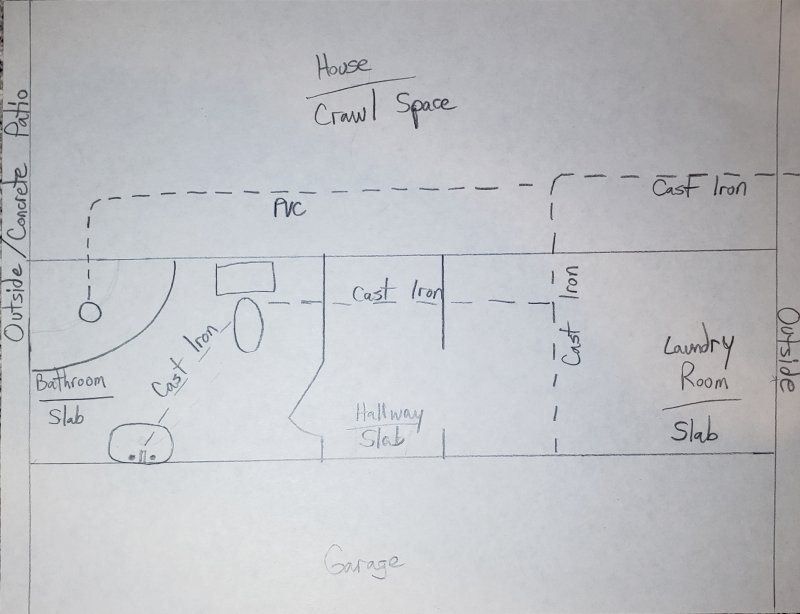 You seem like your pretty handy so if I were you I would get some lead and oakum and lead in a short piece of cast iron pipe straight and plumb and then connect the remainder with PVC and a no - hub band. find a suitable container to melt the lead in, you can use a standard hand held Mapp gas torch to melt the lead.

Handyman said:
The only problem is that to get a 5 degree pitch I would need two elbows that have a difference of about 5 degrees. If I use two 22.5 degree elbows I'm still going to be off 5 degrees.
Click to expand...

Assuming some amount of offset is OK, with (2) 22.5 elbows (say one street and one regular) you can get a net bend of anywhere from 0 degrees to 45 degrees.

If you connect the elbows so they lie flat in a plane and both turn in the same direction, you get 45 degrees of bend. If you then twist the joint 180 degrees, you'll find they still lie flat in a plane, and you've just got a small offset, with o degrees of net bend (your outlet and inlet are parallel). In between your elbows won't line flat in a plane, but you get a combination of some offset and some bend.

So you can certainly get to 5 degrees bend if you like, with a little offset.

run toilet 1 foot from underslab to crawl space. run new under slab from laundry (assuming its on garage wall?) to crawl space. the laundry line will pop through the garage wall and turn and run to lav. box a soffit if you wish for the line running along garage wall.
This is one way of doing it with minimal concrete demo. btw the crooked lav line could be corrected as Wayne suggested, or James Henry way, another way is heat up and put bend in PVC . I see your doing real nice work I think it still be pretty clean with whichever way you choose. putting all new versus keeping 65 year old cast iron I could argue either way if you never want to go in again and no rodents are under house the PVC would keep you from having to crawl back under there or demo out a nice room
You must log in or register to reply here.

How to align PVC pipe in cast hub with donut
2

Plastic or iron to terra cotta