Closet bend at end of a horizontal wet vent

Say, any help would be most appreciated.

Some of the plumbing layout in the picture is original, but with some modification that I would like to incorporate.

I believe the layout is a horizontal wet vent from the WC to the branch where the Bath/Shower ties into the drain.

It has two vents: one that opens to the outside that is 3” throughout from the stack on right and then there is an AAV upstream in the attic space (cape cod) in a line parallel to the main and between where the WC and Lav are. I think it is permitted to have one fixture upstream of a dry vent, which the lav would be (however, I think some adjustment is needed for distance from AAV). Branch lines would be 1 1/2 or 2

The WC is planned to be at the beginning of horizontal drain/vent (on left). It would theoretically have 2 vents and would be 3” throughout to the santee.

Would this be a functional setup?

Thank you to all in advance. 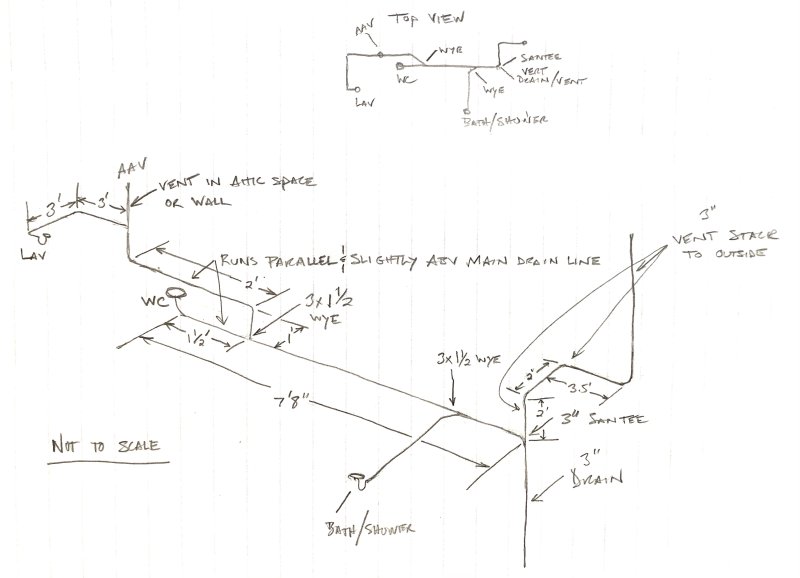 Nice drawing! Answering with UPC standards.
We only use two inch for shower drains. And WC vents must be two inch.
Six ft. for that lav is not approved. 2" arm and trap would be five ft. But, 1-1/2" trap arm and ptrap allowed distance to vent is three ft. six inches.

The lav trap arm is limited to one pipe diameter of fall, so with a 1-1/2" lav trap, you can get up to 6' if you have a perfect 1/4" per foot fall. In other words, the diagram is at the edge of allowable on the lav trap arm, and you'd be better off installing the AAV farther upstream or outside the wall under the lav itself.

Thank you, gentlemen.
Forgot to mention that it would be following IPC.
The 3” vent stack just happens to be what came with the house that I purchased.
I guess my biggest concern is that, will the location of the closet bend at far end/left of the 3” horizontal wet vent be alright. It will run through the floor joists and be concealed between and main floor and second floor.

715RT said:
I guess my biggest concern is that, will the location of the closet bend at far end/left of the 3” horizontal wet vent be alright. It will run through the floor joists and be concealed between and main floor and second floor.
Click to expand...

With the wet venting, the intentional vent path for the WC is up the side branch of the 3x3x1-1/2 lav/WC wye to the lav vent (AAV). So the distance from the bonus 3" dry vent downstream doesn't matter from a code perspective. Not sure what will happen in actuality, but the system is supposed to function adequately without that bonus 3" dry vent.

From my perspective, I didn't perceive that it would be an issue from a functional or code stand point either, but being that I do not monkey in this trade too often, I certainly appreciate the advice and perspectives of those more in the know.
I will definitely be relocating the AAV a little closer to the LAV.
Thank you both (and anyone else who chooses to chime in) again for your input.
Time to get the home usable again.
Have a good evening.
You must log in or register to reply here.

Will this pass inspection, or additional vent needed?