I have a 4" cast iron stack that split open between the first and second floors. So, I took it out. Now I need to put something in its place before I forget there's not a drain and flush the toilet again...

My problem is that the old system had a side-inlet elbow where the lav/toilet turned down, which was venting the tub. Whether it's code or not, I can't find a replacement so I'm replacing everything from where the 4" vent becomes accessible from the first floor, just before where the wc ties in, down into the basement. Here's the old fitting between the 2nd floor floor joists. 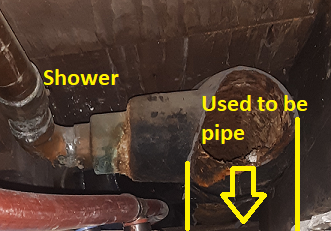 I believe I have three? acceptable options, all starting with replacing the side-inlet with a 90-degree fitting. The squiggly bits are all 4". 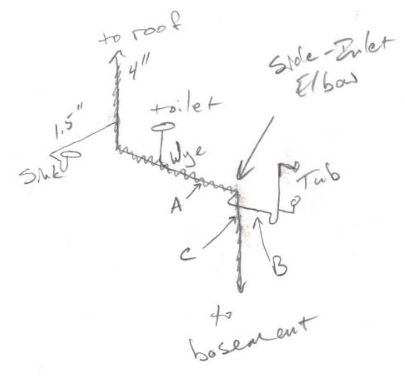 1. Keep the wet-vented shower. As I understand it, IPC allows the shower to wet vent downstream of the toilet. This would require me to run the tub past point A, turn the drain around, and then enter the system at Point A with a 4x4x2 wye.

2. Put a 4x4x2 wye at Point C. Now the shower needs a vent. I could put an AAV in the behind the tub. It's a 3'x2' open cavity that extends to the inaccessible "attic" area, so I wouldn't need a grill or anything. There's an access panel to get at the tub and shower plumbing.

3. "Luckily", I already have a hole in the ceiling in the hallway that I made to crawl up into the "attic" to put up some chicken wire to keep the birds out. Instead of an AAV, I could run a vent up into that space and connect it to the 4" stack before it exits the roof.

Are these all correct? I've checked all the distances with the trap arm tables and they're OK. I also made sure there's room to properly slope the drains, considering the house isn't exactly square or level anymore. I listed these in order of preference, but I'm open to be persuaded.

I think all your options sound viable

At the risk of going off on a tangent, I ask whether it would be acceptable to put a (sanitary) side inlet san-tee (say 4x4x4x2) on top of the stack and then plug the top entry. Bring the lav/WC 4" line into the 4" side entry, and the tub into the 2" side entry. Would that be an acceptable horizontal wet vent, across the two side entries of the san-tee?

Tangent accepted. I, also, am curious about this.
You must log in or register to reply here.

Venting side by side bathrooms, and another bathroom a floor below
2