Aerator, It was supposed to be a quick and easy job

... to replace the kitchen faucet or so I thought. Having anticipated problems with the old stops, I bought new 1/4-turn stops. I expected it to be a struggle to get the old compression stops off but was surprised how easy it was to slide the compression rings off. It was in a tight space so I had trouble to grab the body of the stops to unscrew the compression nut. Actually I think that turning the body when trying to loosen the nut broke the ring free so I was able turn the ring with my fingers after I got the nut off.

The kitchen sink is against an outside wall so I ran the pipes up through the floor and used straight stops versus the usual wall protrusions and angle stops. Having them come up through the floor however made it hard to grab the body to keep it from turning until I got wise and took off the handle that was in the way.

I got the new stops and faucet installed but before I turned the water back on, I went around to all the faucets in the house and removed the aerators. When I went to remove the aerator on this new Moen Belfield 7245C faucet, I discovered that it needs a special tool that they did not supply. The manual says "To flush debris from the plumbing system: Remove the Aerator by using the included
Aerator Tool (L) provided with select models." Why only select models and not all models? Seriously? I had to resort to using a makeshift tool to get it off. 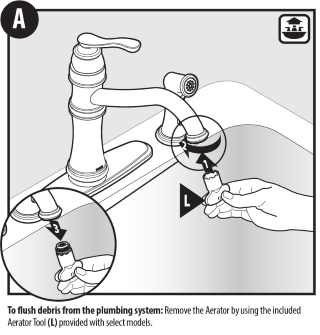 When I turned the water back on, the dishwasher hose connection at the angle stop leaked. The rubber seal must have shrunk and the bit of movement of the plumbing was enough to cause it to leak. A half turn or more on the nut fixed that. Now I am worried about the other end of the dishwasher supply hose but checking it requires that I pull the dishwasher out as the connection is way at the back.

As I was cleaning up under the sink, I discovered yet another leak, this time on the sink drain. Again, a bit of movement was enough to cause it to leak. This time however, tightening was not the solution as the rubber gasket was rotten. Not having a spare, I had to cut down a larger washer with a razor blade to get by until I can get to the store.

Just be glad this didn't happen the day before a wedding.

sometimes I'll flush the lines before I connect to the faucet if the aerator is difficult to remove . the note with your new faucet saying key with selected models I think refers to those models that need a key many can be removed by hand and don't require special tool
Last edited by a moderator: Sep 11, 2022

Jeff H Young said:
...many can be removed by hand and dont require special tool
Click to expand...

It is recessed so it could not be removed by hand. It needed a special tool.

Sounds like apartment remodel we are starting. They wanted to start with three apartments to get an idea of what everything would look like and cost. But they didn't start with three apartments that were near each other. We had several small issues including the maintenance guy, who was in charge of turning the water off, forgetting that one of these apartments actually had to separate cold water shut offs. So a big surprise for me when I cut the cold in the kitchen and flooded the apartment. This was a second floor apartment so the one below it got flooded also. Missing toilet flanges, bathtubs with no access. Rough ins that don't fit the new cabinets (overlooked by the carpenters), shower surround different heights than before and many other small things make for more than you bargained for.

LLigetfa said:
As I was cleaning up under the sink, I discovered yet another leak, this time on the sink drain. Again, a bit of movement was enough to cause it to leak. This time however, tightening was not the solution as the rubber gasket was rotten. Not having a spare, I had to cut down a larger washer with a razor blade to get by until I can get to the store.
Click to expand...

It is a double sink so before sending the wife to the store, I decided to pull the other tailpiece off since there was limescale showing on the threads. I couldn't find any remnant of gasket on it so I changed the order to qty 2.
You must log in or register to reply here.

brand recommendation for angle stops or chase the threads?

DIYer: Best way to replace valve at the end of toilet's polybutylene line?