It shared gas line and vent with a Heil 100,000 BTU induced draft furnace installed in 1996. The Heil was an upgrade in 96 to a smaller unit when 1,000 aq ft wer added to 1984 house. In addition to the current Whirlpool tank, two previous tanks were in the same spot.

An inspection in early Dec, 2020 showed small cracks in heat exchanger. A new Heil (now owned by Carrier) was installed Dec 20, 2020 by the same HVAC guy who did the one in 1996. Per more recent code, he changed the single wall vent with double on both the furnace and water tank. I believe the vent is the same configuration as before but I can't be sure. (see "after" picture below). Of note, my HVAC guy is retired, only doing furnace work till after Christmas when he went to Florida. An associate is handling any service work for his customers till the Spring.

On Dec 21, water wasn't hot and I discovered the pilot was off. The Whirlpool uses a Honeywell controller and shows a flashing lite every 3 seconds to indicate pilot is on. A visual also confirmed the pilot was out. I relit it. Main gas mantle came on and hot water was restored in a short time afterward. Later, that same day, the pilot was off again. Replacing the old vent had produced some soot on the floor. He had vacuumed but some remained. I cleaned the lint filter of dust, etc which had accumulated over several years and vacuumed the vapor stop, air filter under the tank, then relit the tank. The pilot stayed lit for a couple days and I was back to no hot water.

I disconnected the flex gas line, pilot and wires to remove the mantle. With the mantle out, I was able to access the combustion area, vacuumed the inside of filter and lightly sanded the thermopile. After three days, I thought it was a done duck but the pilot it went out again. I took the mantle out again, removed the thermopile from the pilot assembly and cleaned it more thoroughly. I also ran out to get a new multimeter (my son "borrowed" mine a year ago). After reassembling the mantle and relighting the pilot, I measured the output as it gradually came up to 630 MV. Per Honeywell information, it requires 350 MV for the gas valve and pilot. It went off again later that day. All I did was relight it. Other than do a sanity check of the pilot indicator light off and on a few times a day, it has now been on for 4 days and I'm scratching my head.

I was debating replacing the thermopile (about $25 or even Honeywell control unit $150.) I read about the controller being a common failure. Then I read a blog suggesting the vent it might not be drafting adequately. I have been in touch with the associate but I thought i had it fixed, plus with it intermittent, I'd like to make sure the problem is with the water heater, not the vent configuration. My "service person" for the water heater is myself as I have installed three in this house (plus helped friends install theirs.

I have checked the draft by lighting a match, blowing it out and watching smoke drawn into the vent. It appears to suck smoke in. However, I did read a HVAC blog indicating the vent should be vertical for 12" before an elbow. I don't know how critical this is. As noted in the pic below, there is an elbow directly on top of the tank. As of now, it just been an inconvenience and not a situation without hot water for an extended time. I might be able to reconfigure the vent, but rather leave it to the serviceman if that should turn out to be the issue.

Although getting my 76 yr old body down on the floor is a pain. I don't want to have him replace the vent and not fix the problem. 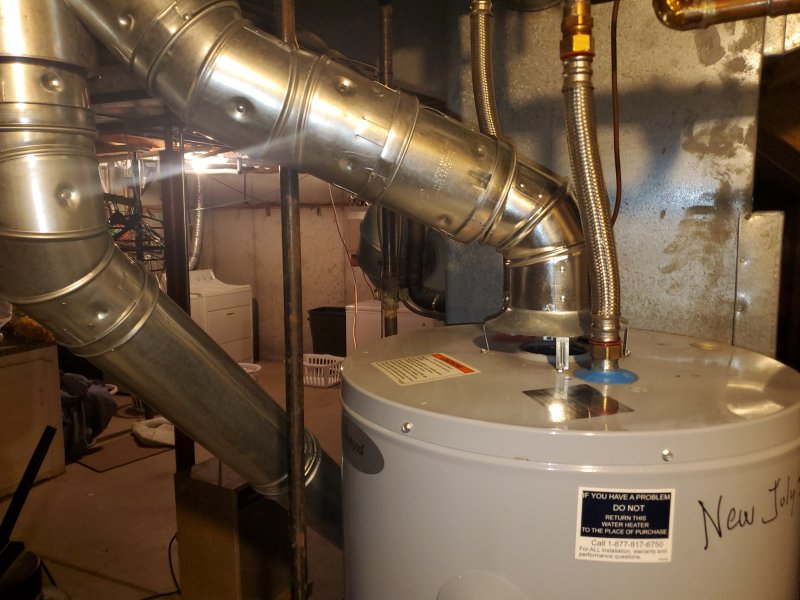 Does that water heater have an fv (flammable vapor) sensor? Our service guys change a lot of those when the pilot won't stay lit.

The only sensors it has are the thermopile and an over-temp probe that sticks in the main burner flame. This probe is wired in series with the thermopile and connected to a thing sort of like a GFI breaker. If it were to get too hot, a button would pop out and break the voltage from thermopile to the controller. It can be reset by pushing the button in. It has never popped. I guess that means the turkey isn't "done"..

Thanks for taking a shot. I'm grabbing a straws trying to think of something that I haven't considered.

Remake the power pile all the connections. Loosen screws tight them back down.
You must log in or register to reply here.

Sealed Water Heater; Pilot lights outside, not inside.