I am trying to figure out the venting for a master bath remodel. General sketch is attached. My questions.

1) can I vent 2” shower drain 84” to existing 2” vent which ties into the toilet.
2) can I vent the 1.5” bathtub drain into the 2” vanity drain, which would be a wet vent. As I understand
3) do I need specific angles for the horizontal portion of the vents
4) I could run another vent for just the shower and tub, but would have to angle the vent pipe 45” to get it up through the ceiling. Would that be a better option that tying into existing vents? 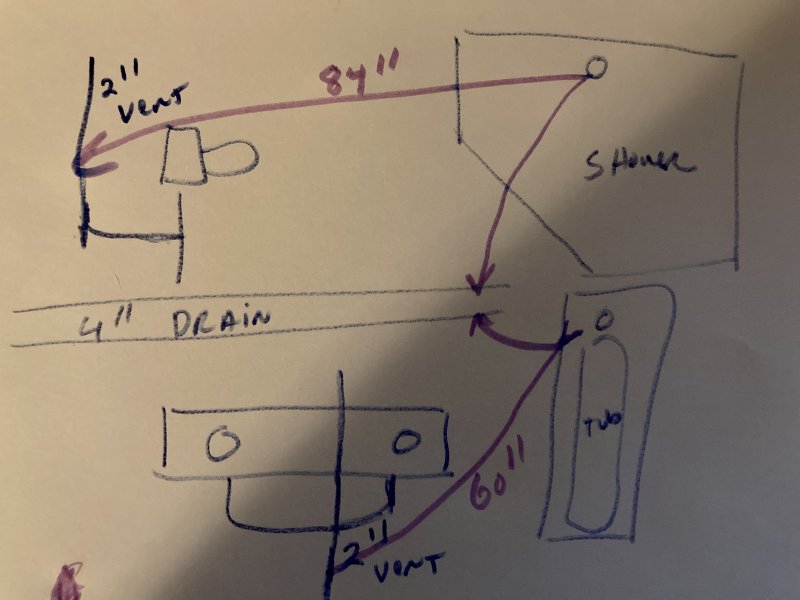 Let's start with the basics: every exposed trap (lav, shower, tub) needs to have a vent connected to the fixture drain before or as it connects to another drain. [Edit: IPC common venting is a limited exception.]

The location of the vent connection is limited by the requirement that the fixture drain falls no more than one pipe diameter between the trap outlet and the vent connection (that portion is called the trap arm). That requirement is called the trap weir rule and prevents the trap from siphoning. NC uses the IPC, and for the IPC the trap weir rule plus the minimum 1/4" per foot slope determine the maximum trap arm length: 6' for 1-1/2", 8' for 2". But note you can only achieve that maximum length with a perfect 1/4" per foot slope.

The WC needs a vent connection as well, but its fixture drain fall isn't limited like the exposed traps, as it intentionally siphons its integral trap and then refills it.

If the vent connects before the fixture drain joins another drain, that's dry venting. The dry vent has to come off the upper half of the pipe and rise at an angle of no more than 45 degrees off plumb to a height of at least 6" above the fixture flood rim. Above that height the vent is allowed to go horizontal. [The IPC also allows an AAV for some dry vents, and the AAV only has to be 4" above the trap arm.]

If the vent is the connection to the branch drain, that's wet venting. The IPC limits wet venting to bathroom groups, which includes all the fixtures in your sketch. The branch drain needs to have a dry-vented fixture on it already, which vents the whole wet vent. And as a wet vent is serving as both a drain and a vent, the size is often required to be bigger that it would be for a drain alone.

Now the lav trap is much higher than the shower and tub. That means the lav is basically always dry vented. And that lav drain can be used to wet vent the other bathroom fixtures. E.g. the lav drain could join the tub, then the shower, then the WC, with the one lav dry vent serving everything. Note that you can't have the tub and shower combine, and then join the lav, with the lav wet venting the tub and shower. Also, since you have a dry vent available near the WC, you might as well use it if convenient to dry vent the WC. So you don't have to use wet venting for all the non-lav fixtures, some can be dry vented.

Given the above, how about drawing a more detailed, dimensioned plan view of the trap arms and drains, with the dry vent connections marked. Then we could check that it meets all the requirements I mentioned above.

Can this be considered a wet vent or do the fixtures need vented individually?
2

Will this work as a “wet” vent