Got a new home ~7k square feet in the mountains at 6,000' elevation. The previous owners lived there full time but we are only in roughly one week a month, and set indoor thermostats back to 58˚ when idle. Was built in 96, has hydronic heating with two Lochinvar RBM-270 boilers, mixing pump, 8 inside zones and 3 outside snowmelt zones. Inside thermostats are simple air-sensing white rodgers that control zone valves for the water. Most of the radiant tubing is in concrete, there are a few carpeted areas but presume the carpet is also on top of a concrete slab. Domestic hot water is completely separate (two cascaded storage water heaters).

There is a lot that seems very weird. 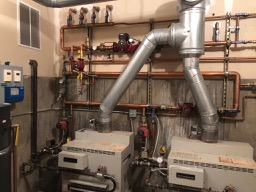 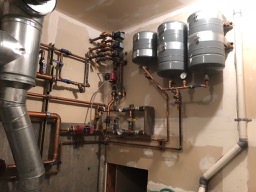 Tap off boiler heat with heat exchanger to outside snowmelt zones. 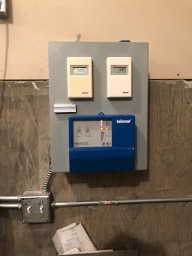 Tekmar 365 mixing control (bottom), clock (top left, controls the unoccupied input to mixing control but is not used), two stage thermostat (top right, turns off respective boiler if temp after it returns to main boiler loop is over 185, resets when below 175).

First of all, the tekmar mixing control isn't doing anything. Literally. Both the variable speed pump output and 4-20mA valve output are unconnected. The mixing pump just runs at fixed speed with no regard for anything. The only thing that modulates is if there is no heat demand from any zone valve, then all the pumps and boilers are shut off.

Each boiler has its own service thermostat that is set to ~150 and a high limit thermostat at ~180. But they are connected to the heat exchanger by long copper wires and I believe that they lag the actual temp pretty significantly.

Because the mixing control doesn't do anything, the system loop temperatures vary wildly. When the house is fully heated, it will be from 140˚-160˚. It makes for nice and toasty floors but I presume is not great for efficiency. On the other hand, when warming up from setback, can barely drive system loop to 90˚ even though output from boilers is at 180˚, and return temp to boilers at 80˚.

It is rare that both boilers run, even under maximum load (say, heating house from 58˚ setback to 68˚ when it's 10˚ outside). If the first is on, it's rare that its output is low enough to trip the second to turn on. If they're both on, the temperature after second boiler returns to the boiler loop quickly exceeds 180˚ and the tekmar thermostat flaps it off and on every minute or so.

Even with an inlet temperature of 80˚, the second boiler is capable of sustaining outlet temp of 180˚ alone. Makes me wonder why two were needed in the first place - perhaps the circulator pumps should have been bigger to better pull heat out of the boilers? The first boiler doesn't produce as large a rise, but based on observations it runs 2x-3x as often and so is probably less efficient due to runtime/age. Heat exchangers were replaced in the last year or two on both.

So... can anyone help make sense of the above? Is there method to the madness? Is it pure madness? It really looks like system is running well below ideal efficiency, what might be done to improve or repair it? My theory is that it was designed (probably well) by one person and installed by another with little regard for the intent of the designer.

Radiant floors in concrete should not be run all that hot. Excessive heat can cause problems from the excessive thermal stresses. It is not uncommon for radiant in a slab to take a couple of days to fully warm the structure. Given you want to setback the temp since you're not there all that often, I'd highly recommend you buy some WiFi connected thermostats so you can start things off before you get there or pay someone to turn it up before you arrive.

A properly setup system has the floors warm, never hot. Depending on the lengths of the loops, it might not be uncommon at the beginning of the cycle after a setback for the return water to be quite cool. This would often require a mixing circuit to keep the return water at a safe level in the boiler. This can be a problem for some types of boilers unless they are condensing, which yours do not appear to be. The return water that cool on a regular basis will play hell with the longevity of the heat exchanger and the flue. You'll have lots of condensation, and corrosion...the condensate is acidic and thus corrosive, plus, unlike a condensing boiler, it won't have a way to drain off the condensation.

Because you typically don't want to run the boiler with antifreeze, that's why they have a heat exchanger for the snowmelt system which does (or should) have antifreeze solution in it. That's about the limit of my knowledge on this...someone else may have some thoughts. But, at least in mine, you do have some setup and maybe operational issues that should be addressed by someone that does know more.

Radiant heat designs are really not meant for setback operation or at least no more than a couple of degrees ( my experience is with standard boilers and copper fintube). Form everything i researched while considering a conversion to gas I have read they are designed for constant comfort and are usually erratic or never get the house really comfortable with large setbacks. Jadnashua makes some excellent points.

At 270,000 BTU/hr input, even with the snowmelt zones and derating for altitude just ONE of those boilers is likely to be oversized for the actual heat load. Are they equipped with the 2-stage burner option mentioned in the manual?

Running at higher temp doesn't affect efficiency very much with non-condensing boilers unless they are in an uninsulated space, separated from the fully conditioned space by an insulated wall or insulated floor, where the standby and distribution losses are in fact lost. But running more than 100F water in concrete usually isn't necessary to keep up with the load- it's only the setback that would need higher temp water, to deliver a more rapid recovery ramp while heating up the thermal mass of the concrete. That's also likely to have a temperature overshoot at the end of the recovery when the setback temps are large.

Entering water temps at the boiler of 80F will damage most non-condensing boilers. Finned water tube heat exchangers can run at lower incoming temps than 80F, but even those usually have to be plumbed primary/secondary to raise the entering water temp at the boiler. I'm not familiar with this particular model line, but if I owned one I'd be looking over the manual very carefully and taking measurements.

If you're only there one week per month and it's at 58F most of the time, run a fuel-use load calculation using both base 55F and base 60F weather data to come up with the BTU/hr per degree-F constant and project both he base 55F & 60F approximations to a 68F indoor temperature to bracket the likely load.
You must log in or register to reply here.

Boiler Swap - Is this too small?