My basement floor is approximately 7’ below grade and is poured concrete.


In one corner is a square opening, approximately 20” square.


I assumed it was a sump pit.


I cleaned out the accumulated dirt, stone, debris and assorted crap from years of neglect and discovered 2 old cast iron 6” pipes.


Over the past year I gut renovated this house and installed all new piping, including the main drain that exits the building. That’s my way of saying that I have no idea what the discovered pipes used to do (or where they used to go) but they are definetly not in use now. They did have what at some point in the past was poop in them (truly years since there was a working bathroom in the house).


So, my question is: what do I do with this situation? Fill the pipes with something and use the pit for a sump pump? Pour a few inches of concrete on the bottom of the pit first? Something else?

Do you sometimes get ground water in your basement?

Next time there is a really big long rain, look into that pit, and see if there is water.

Reach4 said:
Do you sometimes get ground water in your basement?

Next time there is a really big long rain, look into that pit, and see if there is water.
Click to expand...

The basement is always dry.

The pit has 2 old, old sewer pipes in it and right now has a couple inches of nasty water, but I don't know if it was just in the pipes that I just cleaned or elsewhere. The dirt underneath is total clay, so water doesn't percolate well. I put a pump in yesterday, but the pump couldn't get the all the water out.

It's hard to imagine that that 20"x20" pit is acting as some sort of hydrostatic pressure relief system for the 1500 sq-ft concrete slab that is my basement floor.

Unless it's a mistake, I'd prefer to just pour concrete in it up to the top (and then another inch or 2) above the old pipes and leave it at that.

What do you think?

joseph skoler said:
What do you think?
Click to expand...

I would not fill it with concrete, in case the dry-basement turns not-dry in the future. If you feel you must fill, maybe fill with gravel, and top with a thin concrete/mortar top that you could break out.

A sump pit is often installed in case it is needed. But if you really want to fill it with concrete, and you are confident that your basement will not flood, maybe put a floor safe there.

I'm wondering if this was never a sump pit, but rather the main cleanout.

A pipe comes in and a pipe goes out (I assume).

Why would this be set up this way? 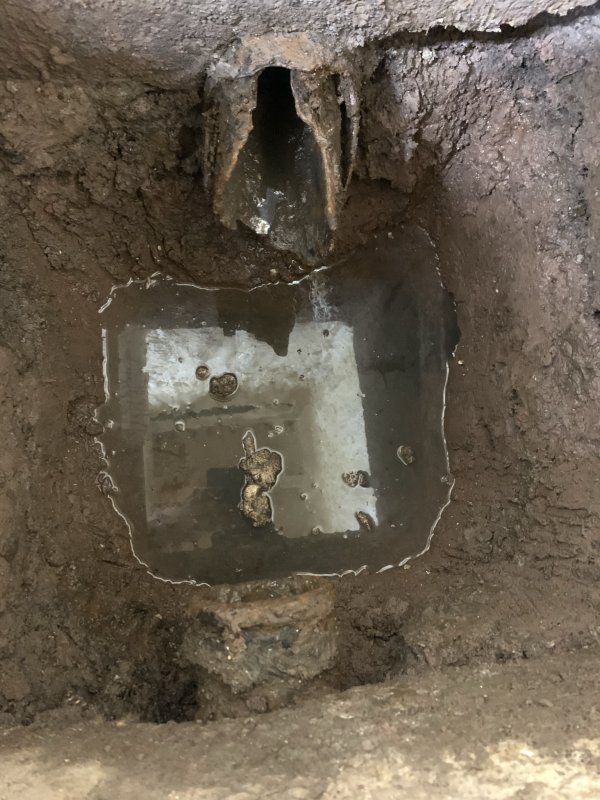 Drain tiles feeding into the pit from two directions would be my guess.

I removed 95% of the water and waited until it rained hard again.

A substantial amount of water has appeared in the pit. I'm pretty sure it is not coming in from the pipes, but rather seeping up from the ground.

The pit is in the corner of the basement, so about 2' in 2 directions is the outside, which is a gravel drain (42" wide, 10' deep, with a slotted pipe, leading all the way down to the road). I wonder if the water is making its way from the french drain through the dirt under the basement slab, and then into the pit.

I would prefer to not have this open-to-the-dirt pit, allowing moisture into the basement.

Given the new info, if I fill it halfway with gravel and then a sheet of plastic (as a vapor barrier), then some rigid insulation, then a thin later of mortar, would that be okay?

Or, I can fill the entire thing with concrete.

Any REcommendations for a Shallow Pit Sump Pump