As I explained in a previous post, I am trying to have all of the rough-in valves + trim kits ready for when my new plumber is hired (had to let previous contractor go due to not building shower pan to code + using wrong adhesive for marble shower wall tiles).


I have a freestanding tub that I need to purchase correct valves/fixtures. Initially, I purchased a floor mount tub filler (with attached hand held shower head) - but after tub arrived, my contractor suggested doing a wall mount instead. I’d like to add a hand held shower head also.

If I use a Delta (or a different brand - I’m using Delta in the shower so was planning on sticking with the same brand but will look at other option) trim kit, do I add a separate diverter for the hand held shower head? For another bathroom I’m remodeling, I’ve purchased a tub spout that has a diverter in it. Easy to understand how the plumbing is set up when using this type of tub spout.

For this tub, I want to use a tub spout(filler) that does not have have an integrated diverter (I don’t even think they have ones with integrated diverters that are long enough to use as a filler anyway). My tub is freestanding - but can be placed back-to-wall. It also is made to allow for a deck mounted faucet - but my previous contractor had it plumbed for wall mount as stated above (assuming that his plumber correctly did the work).

I think your previous post you had selected an R22000 which is a mixer with a diverter valve. I think that would be fine supplying a dedicated non diverter tub spout and a handheld for the tub. You could use a separate diverter valve, but the result is the same. I like the integrated valves just because it reduces clutter. The floor mount fillers are going to fill faster but at around 10gpm Delta and Brizo (same manufacture and uses the same valves) both have longer reaching tub spouts. About 7" of reach. I always carefully lay out that style of freestanding tub so that the spout not only pours in nicely, isn't hitting your head when you're laying in the tub but also drips inside of the tub. Depending on who you hire, it may be necessary to have all those components on site for layout. I also like to leave 1" space between the finished wall and the tub so that there is some room to clean and your fingers don't get pinched / wedged into that space. So careful consideration of tile build up is critical in this area.

If you have a tub of 70 gallons it will take 7 min at 10gpm or 10 at 7gpm... not a huge deal breaker in my opinion.. which only really makes a difference in the walk in tubs where you really want it to fill fast.

I generally prefer the valves with stops, but that does cut down the fill rate by 1gpm.. again under 11 min to fill a 70gal tub.

Delta and Brizo are brands we install a lot of in our remodel work. Rarely have problems with them.

Have you looked at build.com? Not affiliated in any way I've just had nothing but good experiences. They have delta wall mount Roman tub fillers (not sure if they have the trim you are looking for) but when you select the trim you want it tells you what valve you need.

FYI. If you choose one of the wall mount Roman tub fillers be aware that you may see that the valve it recommends is a wall mount sink valve. They are one in the same. Apparently, the cartridge (sink v. Tub) determines the flow rate on those.

But that also means you can't use that valve with separate Delta spout and handles outside of those for the trim kits meant for those valves (ask me how I know.)

MTy - thanks for your reply - I appreciate the insight. I am going to call Build.com in the morning. I think that they will be more helpful than the customer reps who answer the phone at Delta.


Tuttles Revenge - I agree with your thoughts. I already have that valve - and I’d rather have a trim kit with an integrated diverter vs. having to mount something else on the wall. I just wasn’t sure if it was the right thing to do since no one at Delta could really answer the question for me.

Some areas require a tub filler to be thermostaticly controlled. This allows you to preset water tempature and has seperate volume controls for spout and handshower. Strom makes this one but others are available. 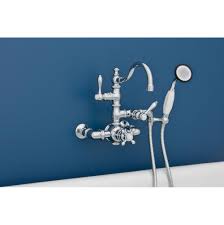 Trying to buy rough-in valve and trim for tub spout and hand sprayer.

Tub Filler Pulling Out of the Wall