I have a 2003 Burnham Revolution propane fired boiler that is having an intermittent shutdown issue. I am wondering if anyone has some suggestions on what could be causing this and how to isolate it, as it is intermittent.

The system has 4 heat zones each with its own circulator pump. A Taco Controller drives the pumps and the 4th zone is for a heating a domestic hot water holding tank.

The problem has occurred 2 times within the last month. There is a call for heat, the circulator pumps turn on immediately and the boiler fires on shortly after that. As it is running for a time it will suddenly shut down and the boiler will not come back on. The zone(s) are still calling for heat and the circulator pumps at this point are just moving cold water. I can get it to restart and run normally again if I de-power the entire system with the main breaker.

Here is some additional background, In the summer of 2020 something similar occurred when the hot water tank was calling for heat. I was able to get it turned back on by tapping on the Honeywell 8148E Aquastat control box. In doing some research I found these units were known for having some cold solder joints on the circuit board. Sure enough on disassembly I found a couple. I touched them up and the issue went away. Tapping this time did not work.

I purchased this house in 2018 and have never been impressed with this system. I always thought it consumed excessive propane. The building inspector who looked at the house just before it was purchased noted that the baseboard radiators took a real long time to warm up and thought it may have been caused by coagulating antifreeze in the system, which never had been changed. The previous owner had the system serviced, cleaned, tuned and flushed before the closing. It really didn't help.

More research did find the circulator pumps are installed incorrectly. Per the Burnham Installation instructions they should be on the supply side, mine are on the return side. This is setup this way as this system has a variable speed internal mixing circulator that pulls water from the heating loops and feeds it into the boiler to heat it up. When the boiler is cooler the pump runs very slowly, as it heats up the water it speeds up to mix more hot water into the loops, eventually it is supposed to run at full speed. Apparently with the circulator pumps on the return side causes too much head pressure and the external circulator pumps are fighting the internal pump. I never changed them as I couldn't get a clear consensus that I would pick up much efficiency vs. the cost of making the change.

Lastly about a month ago on a cold morning I watched the system come on and noticed the small VS3000 control board that controls the internal pump speed. It has a LED indicator that tracks the speed of that pump. It blinks slowly, once every 2-3 seconds, at slow pump speed, and it increases as the temperature increases and eventually it stays on fully with the pump at full speed. I watched this for about an hour, the boiler was definitely hot, but the pump always stayed at slow speed. More research, there is a thermistor which feeds the VS3000 control board temperature data. It is supposed to sit on the exit pipe from the boiler, mine was hanging in the air. Probably was held by a nylon ty-wrap that broke overtime. I reattached it and now the pump actually went to full speed. I am hopeful that this may have been the issue all along for the radiator heating issue.

Soon after I did that I had the 1st shutdown situation with a 2nd one yesterday.

Sorry for the long message but wanted to provide as much info as I could.

Any insights or suggestions are greatly appreciated .

There is a honeywell ignition module that flashes failure codes. On the label of the control tells what the flashes mean. When a failure occurs do not cycle power till you read the flashes. By cycling power it resets control wipes memory clean. Heres the install manual. Its a safe site.
https://www.manualslib.com/manual/893459/Burnham-Revolution.html#product-Revolution

Thanks for the response. The ignition module that this boiler is equipped with is a Honeywell SV9502 and I don't see a status LED on it. It would be helpful if it had one.

Your igniter control isn't the one i found. Correct your control doesn't have any diagnostics. Someone will have to watch the boiler fire, if the control has any signs of moisture. Honeywells numbers the last fout are just as important as the first. Heres a manual on your control but it just a general one. OEMs might add or subtract a terminal or have different timing. Take a pic of the name tag hopefully can find more out.
https://www.google.com/url?q=https:...YQFnoECAQQAg&usg=AOvVaw2KSvwXn4hZwJPUGmhDDRs2 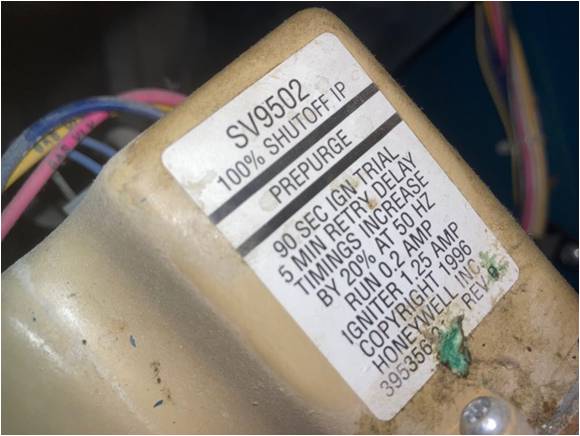 I have never worked on a boiler. But I expect that one possibility of sporadic shut-downs is the bonnet high-temperature thermostat, or whatever they are called in the hydronic world.

If you can locate that in your system, and if you can access the wires, you could measure for voltage across that thermostat during shutdown.

I would suggest parking a peak-reading voltmeter across those contacts, but the ones I have used shut down after some number of minutes.

Just an idea in case other testing does not identify a problem.

Heres a manual its a safe site
https://www.manualslib.com/products/Honeywell-Tradeline-Sv9502-8963376.html

Thank you for the ignitor manual link. Of course its working ok now that I’m watching it.

lp20th said:
Thank you for the ignitor manual link. Of course its working ok now that I’m watching it.
Click to expand...

I finally had a re-occurrence of this issue while I was standing next to the boiler. The shutdown is happening on its attempt to re-start the boiler during a call for heat.

I was watching the operation and initially there was just one zone calling for heat. When the aquastat was hitting the high limit its was shutting down the boiler as it is supposed to and the circulators continued to operate. As the aquastat saw the boiler temp fall below the high limit the boiler would restart and the heat call was still there. It worked great for a few cycles, then a 2nd zone had a call for heat while the high limit was satisfied and the boiler was off. The boiler temp dropped and there was an attempt for the boiler to re-start. This time the relay in the aquastat energized and immediately de-energized. While in this state I took some measurements and found the the 24 VAC coming from the the Taco SR504 was not feeding into the Aquastat and neither was 110 VAC coming into the boiler, which also is sourcing from the Taco. Next I used the highly scientific method of tapping on the Taco box and I now could control the on/off state of the boiler by tapping on that box.

Inside the Taco SR504 are a line of relays for the zone circulator pump control and for feeding power to the the boiler. They are socketed which is a nice feature for replacement. I reseated the relays and everything is working again but I am going to watch for another failure. Tapping on the box no longer has any effect on the operation. So it could be that simple, or maybe one of the relays is going bad, which a simple enough to replace, a cold solder joint on the circuit board or a loose connection somewhere. I did find where someone had an issue with a Taco control and it turned out to be the a loose fuse clip on the circuit board, but I don’t see that here. Not sure if the 2nd zone calling for heat was coincidental or not.

So whether its truly fixed or not, time will tell, but at least now I believe I believe I have the problem isolated at its source.
You must log in or register to reply here.

One Zone not heating

My indirect hot water tank is overheating due to the way it was plumbed, looking for advice.