Vanity top is 33 3/4”. I still need to remove a redundant layer of subfloor (currently have 1/2” + 3/4” layer) and going to install single layer of 3/4”. So I’ll pick up a 1/2” of extra height there. So I’m going to push ahead with the original plan and pray the inspector lets it fly. Thanks for the help!

I wouldn't worry about 3/4" of an inch. What your floor finish going to be? If it will be porcelain tile, there is an advantage to a properly installed second layer of subfloor. If it will be natural stone, two layers are required.

Yes, Proflex is made by Fernco.

I am planning the 3/4” then ditra. Using schluter all-set. Then porcelain tile. Any plywood you recommend? Or you think 2 layers of 5/8” then ditra? The ditra instructions allow a single layer of 3/4”

3/4" minimum CCX plywood, which doesn't exist to my knowledge, so I use sanded ACX. Someone I respect likes Advantech and says regular Versabond bonds to it fine.

Am I on the right track here? That 2” Sanitee on its side by the top banded coupling, is that right? I’ll have to get a coupling to reduce to 1 1/2”. Also see pic of the tub plumbing. I’m am going to cut all that out and replace with PVC. Can I cut where indicated in red and transition with a banded coupling there? Or do I need to take the copper drain all the way back to a vertical ? 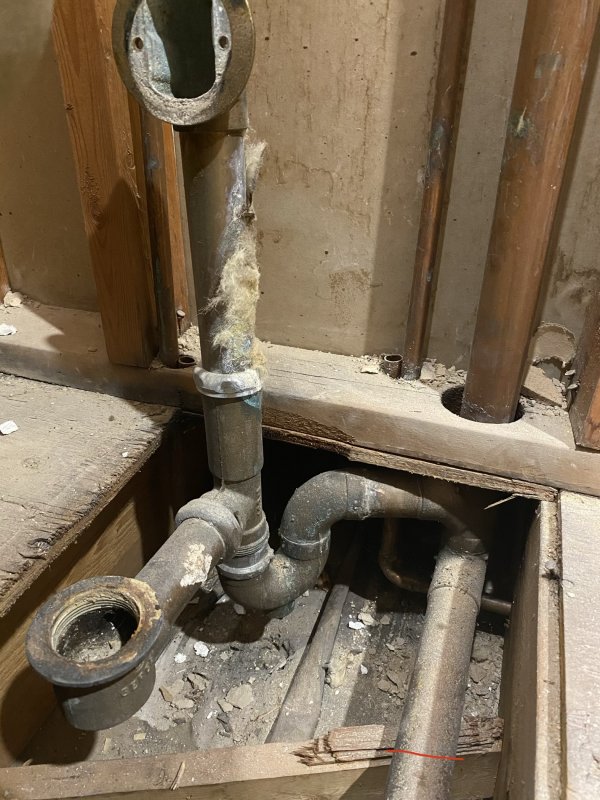 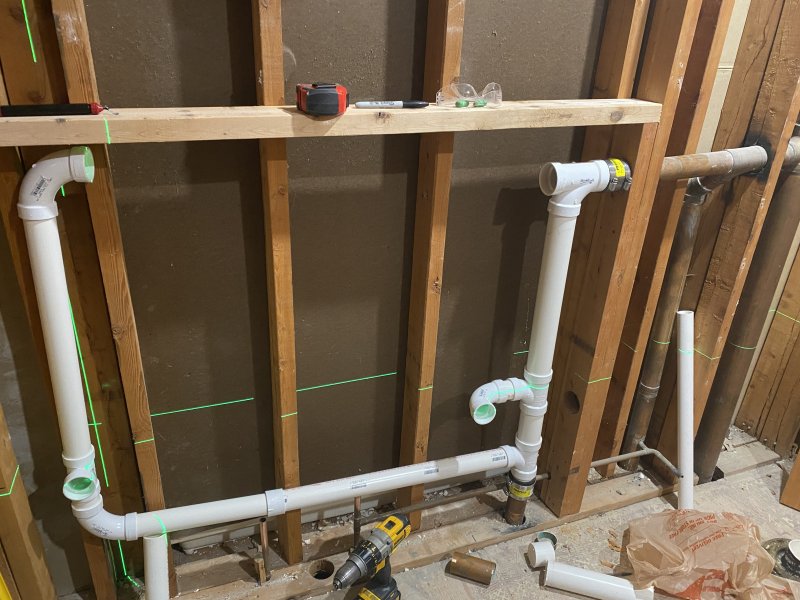 ChrisMDL said:
Am I on the right track here? That 2” Sanitee on its side by the top banded coupling, is that right? I’ll have to get a coupling to reduce to 1 1/2”.
Click to expand...


ChrisMDL said:
Can I cut where indicated in red and transition with a banded coupling there? Or do I need to take the copper drain all the way back to a vertical ?
Click to expand...

Sure you can cut at the red line. The only reason to replace more would be if it is corroded. So take a look at the pipe wall thickness at the bottom. I don't have the experience to know how likely that is.

you can use a vent tee which are non directional . will a bac

Reach4 said:
Are you saying that the santee may be 88/92 degrees, and in UPC I think the horizontal vent pipe is supposed to tilt down toward the vented pipe. In IPC, the horizontal vent can go either way, as long as that way end leads to a drain, allowing a vent to follow an inverted V, perhaps under a peaked roof. Nope, I don't have chapter and verse.

While one reason cited for UPC requiring a combo for a vent to a horizontal pipe is to make a snake coming down from the vent to go the right way, it is sometimes said that the combo makes you ready if you need to convert that vent to a drain pipe in the future. If that logic were applied to a vent pipe connecting to a santee, you might require the santee to be not inverted.
Click to expand...

You guys I think are past this topic but sometimes Its not good or particulary helpful as why a code exists because it dosent always make sence assuming a santee goes a certain way to alow a snake go down is not writen in the code book , also You could have a stack with 4 vents coming together and you cant control where its going. plus a non directional vent tee can be used legaly (I think) but never used one and only rarely seen them probebly twice as expensive. I think a tee is going to vent either way but a plumber wont put one in wrong without reason

Here is everything dry fit. Thank you all so much for the help, the centerline of the lowest part of the vent is 40” off the floor. 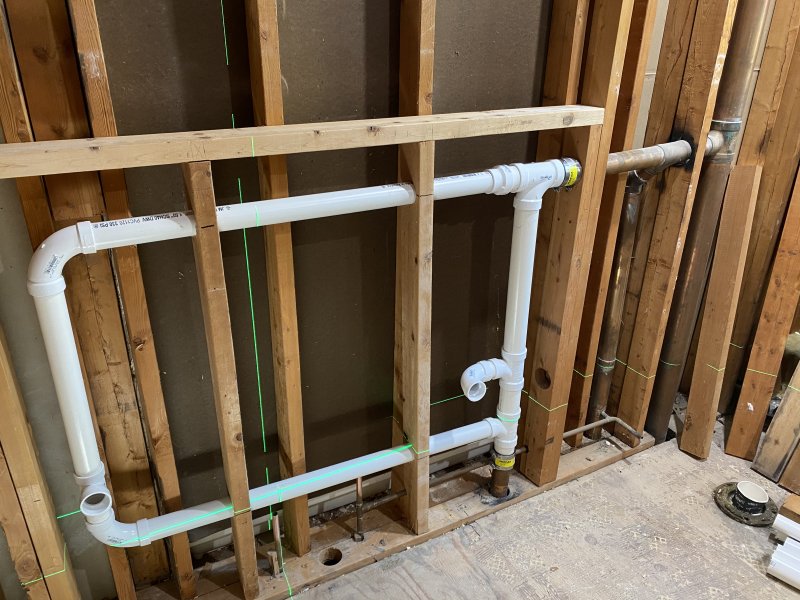 Chris it looks real good! If inspector asks its a 30 inch cabinet, wink wink .
I think it fine you are over flood level.

I believe that with dry-fitting PVC, you won't have been able to fully seat the pipe segments in the hub. So when you solvent weld the joint, the takeup may be greater than you're seeing. That means you may have to cut slightly longer pipe segments for the verticals, where the distances are critical.

Looks good. A cleanout would improve this.

Or at least you might want to clean the copper line below the floor, down and around where the path switches from vertical to horizontal, while that copper pipe is open.

A medium drain bladder on a garden hose shoved as far down as it goes without much force could do it.

Here it is all completed. I added the clean out too 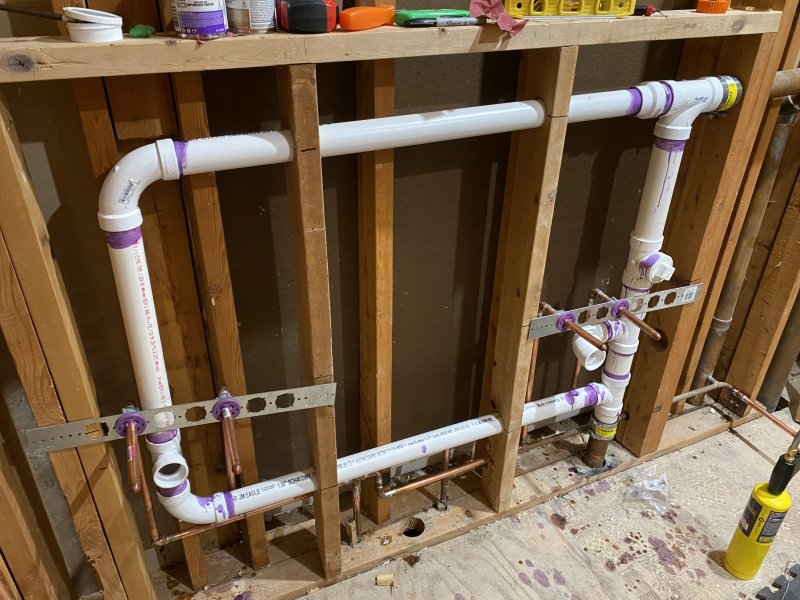 Update: Spoke to the town inspector and he is requiring I have all these lines filled for the rough inspection. I have no idea how I’m going to fill these for a test. I think I need to redo the vertical portion and move the clean out to just above the banded coupling. I bought an inflatable test plug for the 2” clean out. I also bought a cap with an integrated hose bib. So I guess I can fill it with that. But thinking ahead, it will only fill to that next copper vent that’s attached. Is that filled enough?

I also need to figure out how I’m going to fill and test the tub. I’ll post some pics when I can. Ugh that phone call with the inspector really messed up my plans
You must log in or register to reply here.