Where to put cleanouts?

I've drawn up my horizontal drain lines and want to get some input as to where I'll need to place the cleanouts. The house was built in 1920 and is on piers with a crawlspace.

I'm thinking about using a 3" combo wye on it's side with cleanout fitting at A in the drawing due to the fact that I'll have to have a quarter turn at that point to connect into the main branch drain. The cleanout will have to be in the crawlspace, which I understand isn't the ideal location, but I don't see that I have much choice.

Due to the layout of the crawlspace and the lack of headroom, it's going to be very difficult to have a cleanout at the full bath WC (left hand side of drawing) and I think the inspector will let me get away without one. My plumbing buddy says that one can always pull the toilet if that line has to be snaked. I don't think that is necessarily exactly to code, but it gets done of course.

At E in the drawing, I had considered using a long sweep quarter turn and then having a wye with a cleanout just upstream of it instead of the two 1/8-turn elbows separated by a length of pipe. Which would be better?

Where else should I put one if it's needed? Basically, the inspector told me that there needs to be a cleanout every time a horizontal line has a quarter turn fitting, although two 1/8-turn fittings separated with some distance of pipe appears to be acceptable.

At D where the 4' vertical drop where the drain goes underground then turns horizontal, do I need a cleanout at the base of the stack where it goes back to horizontal before exiting and connecting to the sewer stub? It's only about 12' between the vertical/horizontal junction and the city's cleanout at the stub. If I do, how should that be configured? A combo fitting with cleanout?

I know there are a lot of considerations here and I'm grateful for any insights. 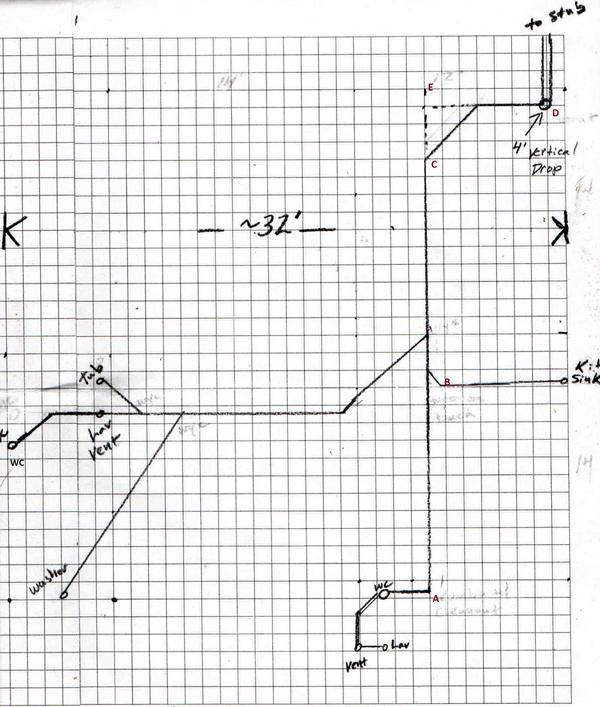 I speed read your words, but quick reply:
"A" yes to a cleanout extended to the exterior.
kitchen sink always needs a cleanout, either combo below the stack or a cleanout/'test' tee in the vertical
no matter at E/C, long sweep is fine and simpler.
All horizontal runs on a main floor greater thatn 5' need a cleanout AND all horizontal change of direction greater than 135 degrees
A two way cleanout at the exterior stub out will serve that final end.

Thanks very much for the reply.


breplum said:
"A" yes to a cleanout extended to the exterior.
Click to expand...

The only problem with extending the pipe at A to the outside of the house is that it would have to go through a block wall that is about 10' away with limited headroom going towards the back of the house in the crawlspace. In the drawing, the rear of the house is on the bottom. I'll take another look at it when I return tomorrow.


breplum said:
kitchen sink always needs a cleanout, either combo below the stack or a cleanout/'test' tee in the vertical
Click to expand...

I've read that a trap adapter can be used instead of a cleanout. Would that be acceptable? The sink will have an AAV as suggested by the inspector due to a large window and the difficulty in putting a regular vent through the roof at that location.


breplum said:
no matter at E/C, long sweep is fine and simpler.
Click to expand...

Would the cleanout at A be sufficient to provide a cleanout all the way to E, or do I need to put a wye with cleanout just before the quarter turn?

It sounds like it would be preferable to have a cleanout in the line from the full bath/laundry to where it meets the main branch drain (main branch runs top of drawing to bottom of drawing), but I'm not sure where I could fit one in due to grade and footing restrictions.


breplum said:
A two way cleanout at the exterior stub out will serve that final end.
Click to expand...

I'm not certain if the city's stub cleanout is a two way or not. I'll have to look as I've not yet finished digging down to it. Typically in our town, they want you to have a cleanout at the house and at the street, but there's only about 15' from the front door to the street, so the inspector said one would be sufficient.
Last edited: Sep 30, 2021

1- CO every change of direction greater then 45DEG

2- CO installed at the base of every stack 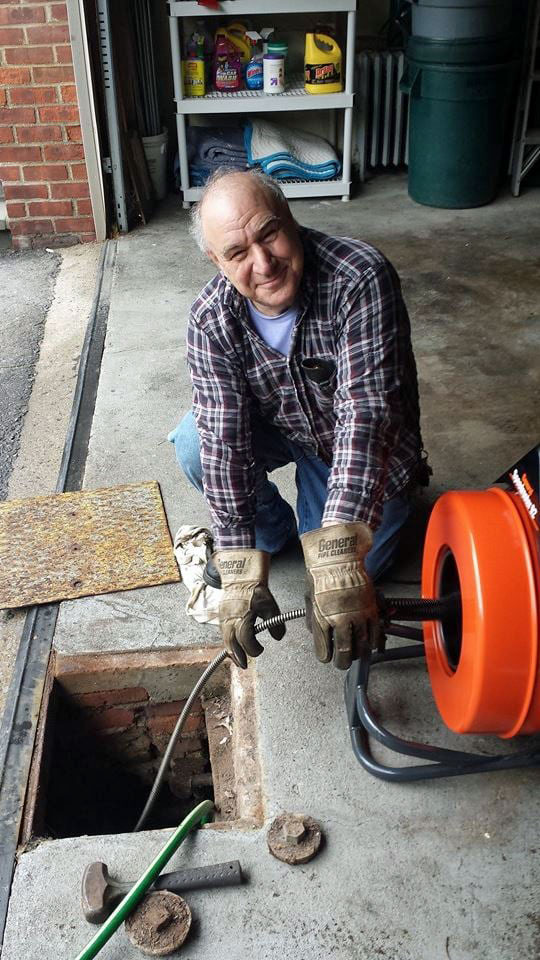 Lordy. Now I think I have seen it all.

One at each run for bathrooms (end of line CO). One at the laundry that is accessible w/o moving the washer.. typically on the vent without offset to the drain. One on the kitchen sink above the trap arm.. that way you don't have to take the sink apart and can run water down the drain while snaking to flush out crud. Not entirely sure the layout of the one bathroom, so I changed the layout how I would.. but definately just a suggestion based on min info. 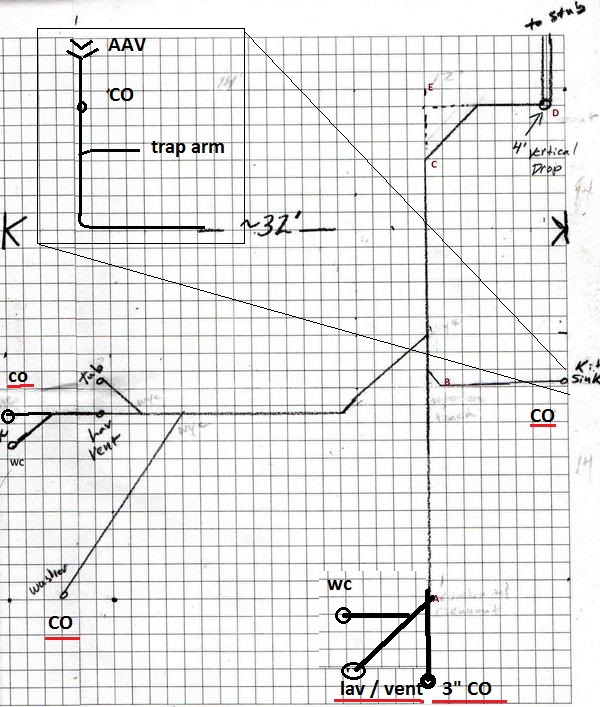 Thanks very much for the reply.


Can the access for the AAV at the washer drain be used as an access point for a clean out by removing the AAV? I'm planning on using one of the AAV boxes that goes in the wall with a cover for servicing it. If that's not acceptable, does one put a cleanout in the vent pipe and then have a hole in the sheetrock for access, or?

Wren said:
Thanks very much for the reply.


Can the access for the AAV at the washer drain be used as an access point for a clean out by removing the AAV? I'm planning on using one of the AAV boxes that goes in the wall with a cover for servicing it. If that's not acceptable, does one put a cleanout in the vent pipe and then have a hole in the sheetrock for access, or?
Click to expand...

I would think that a removable AAV would be acceptable. Ive never done it as such myself, but it does meet the definition. Sylvan mentions that toilets are acceptable as accessible cleanouts, but not under our code.

Other methods for a stand alone cleanout would be a Cleanout Tee installed so that just the CO plug is protruding from the sheetrock, maybe with a cover, San Tee with CO adapter glued in and that adapter sticking out of the sheet rock, sometimes with a domed cleanout cover. Or a Wye with CO adapter. We normally use a CO Tee for its simplicity.

Wren said:
Lordy. Now I think I have seen it all.
Click to expand...

Wren, what on your diagram do you expect to leave as is, and what part will be changing?

Reach4 said:
Wren, what on your diagram do you expect to leave as is, and what part will be changing?
Click to expand...

I went and crawled around under the house and I think I can add a CO to the half bath that will go to the outside if I cut a hole in the non-structural skirting blocks. It's about 11' from the combo coming off of the WC.

Is it OK to have such a long cleanout pipe?

Also, is it acceptable to have a couple of 22-1/2° bends in the cleanout pipe? There are a couple of piers in the way and that's the only way I can get it outside. Also, can the cleanout coming off of the combo fitting from the WC be a 2" pipe instead of a 3"? 2" would mean a smaller hole to drill in the skirting blocks.

Here's what I believe will work: 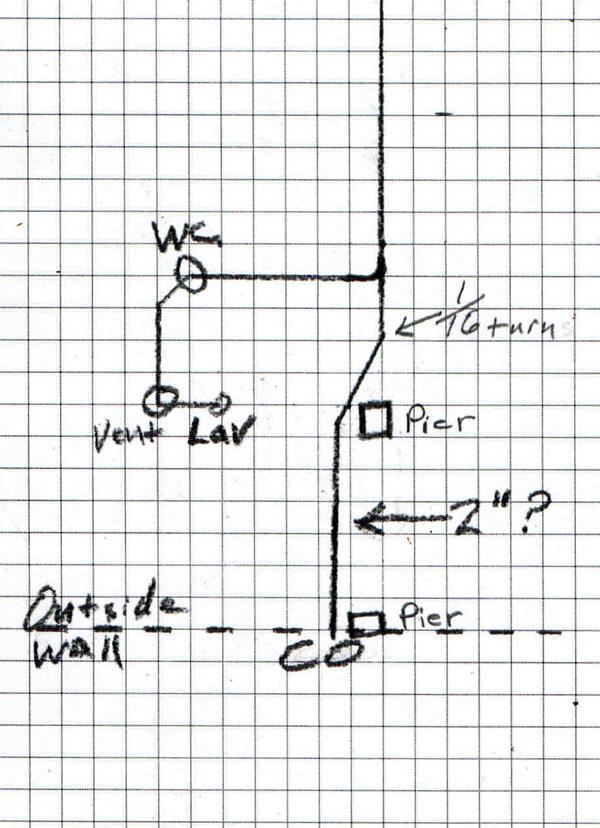 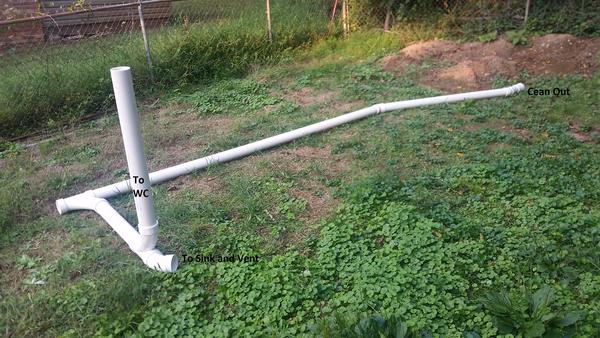 Also, I'm looking at adding a CO to the full bath that will exit to the side of the WC as shown in Tuttle's Revenge's post but I need to look at how that would affect my french drain, etc. The full bath WC is on an outside wall.

Sylvan said:
You would be smiling also knowing your making $450 for snaking the 4" main sewer and removing roots and it took less then a 1/2 hr and this job was 7 minutes from my office not to bad for a 70+ year old

Yesterday and today I hit a gold mine water Jetting CHA CHING
Click to expand...

MACPLUMB said:
You need to have a full size pipe, so a full size cutter blades can be run
Click to expand...

1. "P” trap connections with slip joints or ground joint connections, or stack cleanouts that are not more than one pipe diameter smaller than the drain served, shall be permitted.

2. Cast-iron cleanout sizing shall be in accordance with referenced standards in Table 702.4, ASTM A 74 for hub and spigot fittings or ASTM A 888 or CISPI 301 for hubless fittings.

I assume that it's acceptable to put in a couple of 1/16-turn elbows in the CO branch before it gets to the combo coming from the half bath, correct?

Also, is it possible to get a cleanout adapter that fits down inside of a pipe or do they all go on the outside of the pipe?
Last edited: Oct 2, 2021

never heard of clean outs not being required due to having a toilet to remove. using the AAV for a clean out would work relatively easy but I wouldn't argue it with an inspector and would expect a correction notice
You must log in or register to reply here.