What's the best way to attach safety line hooks to pump and cap/casing?

Another question about the pump install in our new well- when I hook up the poly line between the pump and the head, I'm not seeing much on how to attach them. I've got a Campbell cap that has a bolt inside the cable entry port that I'm wondering about. Is that there to attach a line hook onto, or is that for a grounding wire? The reason I ask is that I hear a lot about connecting to the cap, but I ran across a discussion somewhere about a 'grounding bolt' in some caps, so I want to make sure I'm getting this right. There is no other connection point on the cap to attach to, so I'm guessing I'd have to drill a hole in the casing under the cap and install a grommeted (waterproof) hook there?? That doesn't sound like a good thing structurally for a pvc pipe. 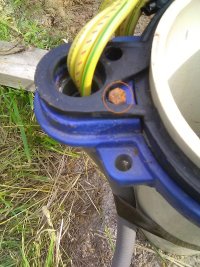 On the other end, my Grundfoss SQFlex 6 pump has two eyes that slide up out of the top of it's casing. With the nipple, check valve and torque arrestor rising above the pump, what is the correct way to lash the line through the eye/s without messing something up? Thanks for any help on this. Lee

The torque arrestor will get stiff and by itself will make it harder or impossible to pull the pump from the well. A "safety rope" is far from safe. If/when that rope comes loose and falls down the well, you will never be able to get the pump pulled back out of the well. I would never use a rope or a cable. Just use long barb fittings with two hose clamps and good butt spice connectors for the wire. You don't need a torque arrestor either, unless the pump is cycling on/off a lot. And then solving the cycling problem is more important than a torque arrestor.

Thanks, valveman, but I'm using these things because that's what all the information I've gathered tells me to. I've seen plenty of videos and read a lot of articles where people pulled out torque arrestors ok. I've never heard anybody but you say not to use a line. They wouldn't put hooks on the pump if they weren't suppose to be used.

You won't find any reputable pump guys that use a "safety line". I have only had to fish out a couple hundred pumps with a "safety line" bird nest sitting on top of the pump, so what do I know? When that "safety line" gets down beside the pump, which is already in a tight fitting hole, it wedges the pump in place and you have to drill a new well. Pump guys might use the holes or hook for the safety rope if we hung the pump in a cistern on a rubber hose. But we would never put in pipe that would be questionable about holding the pump down a well. Use good pipe and safety rope is not needed. Don't use good pipe and safety rope will wedge the pump in the well.

Anything that is not needed yet installed in a well is just another opportunity for a failure. A lot of people use "safety rope". Maybe you will be one of the lucky ones that doesn't have a problem.
Last edited: Jun 7, 2022

The line can be rope or cable. Either will wedge a pump in the hole.

Not if it's fastened to the poly pipe. I contacted Aqua Sciences and asked them if the bolt was for line attachment or a grounding point. They said it's for attaching the rope. Sounds to me like you had to deal with some sloppy installs, valveman. You seem to have a bone to pick with certain points that most others see as normal. (ropes, torques arrestors). You're in the minority on the use of a line/rope, though. Grundfoss covers it in their installation guide, and of all the articles and videos I've read and seen, I've never heard anybody else say it was anything but a requirement and wise thing to do. What do you do if and when your pump disconnects from your down pipe? Pull it up by the wiring? I don't think so. Anyway, I got the answer I needed. Thanks.

Well, the question is whether adding a rope is more likely to be helpful in the case of other failures (down pipe disconnects) than it is likely to be harmful from dropping/breaking the rope itself.

Valveman is telling you that in his extensive experience, the likely harm is greater, and it works better to pay attention to solidly connecting your downpipe.

And an important point is the severity of the failure mode in each case: if the pump disconnects from the down pipe, worst case you end up with a pump at the bottom of the well, but should be able to install a new pump, a little higher up if necessary. While if the pull rope falls and ends up wedging the downpipe against the well casing or bore, now you have a very difficult or impossible job to remove the wedged pipe.

I have no experience in this matter, but I think you should give Valveman's points more attention and weight than your comments have indicated so far. Sounds like at the very least if you have a pipe, an electrical cable, and a rope going down the bore, the cable and the rope need to be lashed to the pipe periodically to reduce the wedging risk. [Just a thought, again I have zero experience.]

Exactly as Wayne says. Out of all the pumps I have had to fish, I have pulled most by the wire. That includes a 75HP pump that was set at 800' deep on 4" pipe. It is good that the motor leads are the smallest, as when the wire does break you want to get all of it out of the well. If half the wire falls on the pump it is as hard to fish as a rat's nest of rope. You can't even get to the pump to fish it out if there is a bunch of rope, cable, or wire bunched up on top of it. I have spent days spinning a hook on a pipe trying to snare the rope, cable, or wire to get it out of the way. Once it is out of the way you can either grab the pump with an overshot or just drive it to the bottom and set another pump above it as Wayne said. I know of one well that has 5 pumps pounded down in the muck so the new one will fit.

For the people who use a rope, 99% never need it. Out of the 1% that does use the rope about half the time it does work. The other half the time the pump pulls the rope out from the tape and the rope breaks or falls on the pump. If you can't get the rope out or the rope wedges the pump in place, you have to drill an entire new well. For the small percentage that uses a rope and the large percent of them that have trouble, I would never use a rope.

Torque arrestors are used when there is excess cycling, and I fix the cycling, and don't add a Band Aid. The torque arrestor needs to be tight enough to keep the pump from spinning in the casing. When it gets a little bit stiff it can also stick a pump in the well. Pull too hard and you end up with pipe and wire, but no pump. I don't put anything down a well that doesn't HAVE to be there. Had a customers kid through a little rock down there, dropped a few wrenches down, and it doesn't take much to stick a 4" pump in 4-5" casing and have to drill a new well.
You must log in or register to reply here.

How are yard hydrants pressurized on the input side of a pressure tank?