For some time I have been posting telling people to avoid Watts Floodsafe supplies for Toilets, Faucets, Icemakers, Dishwashers, and Washing Machines.

I have been posting telling of how I had a customer have one break at the compression connector to the Floodsafe Valve connection point causing a lot of water damage to his home. 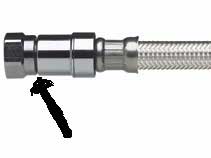 The day I did that job I did not have a camera with me to get a picture of the evidence. The Floodsafe Supply was not installed by me as I was already avoiding them because of the nuisance trips that are fairly well known to happen with them. The supply was retained by the customer as evidence.

Recently a person seeing one of my posts on this connection failure E-Mailed me photo's of the same thing happening at his house. A Watts Floodsafe Dishwasher Supply failed at the same connection that I was talking about. The connector was not over tightened, 1/3 of a turn with the wrench and the compression connector was turning by hand, pressure was 70 PSI. the valve just blew apart on it's own flooding the house and causing about $25K in damage maybe higher if the entire wood floor has to come up or, just the kitchen portion.

In his own words, "I think the valve was poorly manufactured or damaged during manufacture. Like I said before, no freeze, no physical damage I could see. Just blew all by itself. Bury Watts all you want, this product is crap."

Here is a picture of the failed connector under the sink. 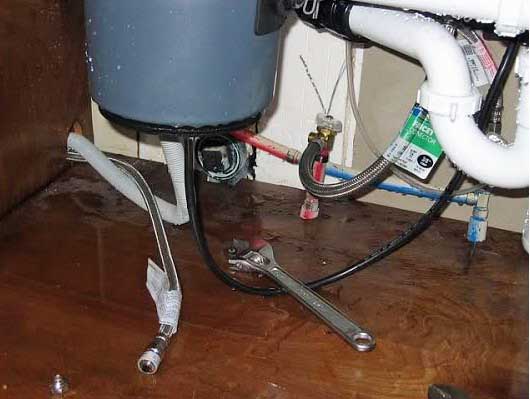 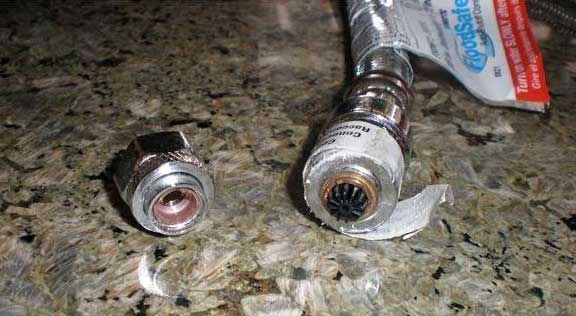 Here is a picture of the label on the failed Watts Floodsafe Dishwasher Supply. 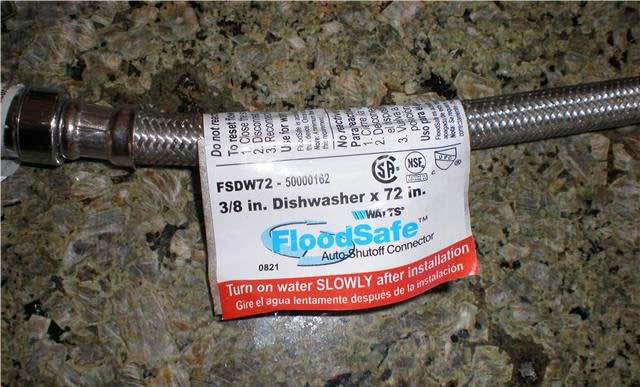 This is a picture of the flooded kitchen hardwood floor. 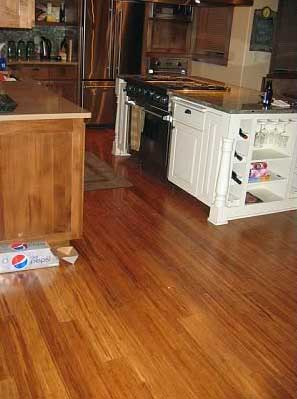 This is a picture of the ceiling below the kitchen prior to demo. 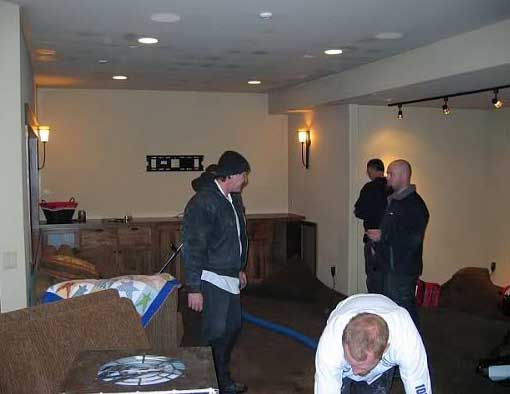 And this is the picture of the same area after demo. 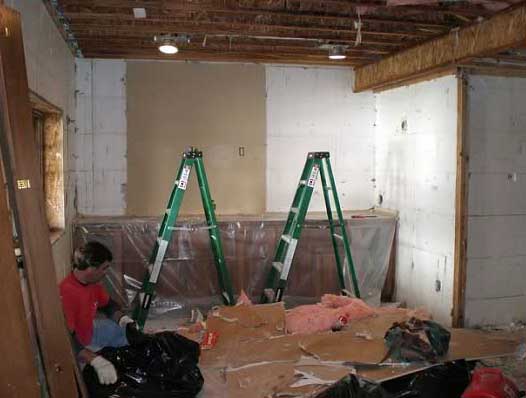 25 K ...even if the insurance company covered it I would go after them for the deductible just because...

I never liked the braided supply lines period, and around here the local inspectors do not like them as well.Its just one of the many things they come out with trying to "improve" on things but in reality makes things worse. like Orangeburg pipe.

Location
Flagstaff, AZ Sitting on an upside down 5 gallon b

I considered one of these, glad I opted not to install it

Location
indianapolis indiana - land of the free, home of

Who paid for the damage???

who got stuck with the bill for damages???

the insurance company or the home-owner
or the plumber du-jour????


certainly gives me the shivers just thinking about
having to pay for all that mess...


the hardwood floor looks like it was worth about at least 20k alone
Last edited: Feb 9, 2009

master plumber mark said:
who got stuck with the bill for damages???

the insurance company or the home-owner
or the plumber du-jour????
Click to expand...

At this point I don't beleive the cards have all been dealt.
I will try posting the information when it becomes available.

How ironic! Thanks for the warning. It's hard to see what was holding that connector together in the first place.

I saw FloodSafe demoed on "Cool Tools" about a year ago. It did seem kinda cool.... Glad I didn't buy one.

SewerRatz: what do you prefer over braided connections?

I heard you're supposed to replace your braided connections about once every 5 years, but I never really understood why. Does the chlorine oxidize the tubing inside or something? When I replaced mine, the only thing that looked worn out were the washers that make the seal on either end. Replacing the whole thing seemed like overkill.

Thats just it Dimprov,
There is just about nothing holding it together.
On the compression fitting there is a thin lip that breaks and on the Floodsafe valve there is a small round wire clip.
Maybe this blow up will let you see it...

Agree Wholeheartedly these are Rubbish

Sure enough, after replacing the sink connections throughout my house, I had a majority of these "floodsafe" hoses start drip leaking from the compression fitting pointed out above. Ended up having to go back to normal steel braided without the floodsafe "protection." Thanks for this information before they started busting.

I'll make sure not to ever install one of these lines, or recommend them.

If I said "Made in China" would I be correct?

If I said "Made in China" would I be correct?
Click to expand...

I don't know if they are, but that's not really the problem.

1) They need resetting too much

2) They have a fragile connection that can break. 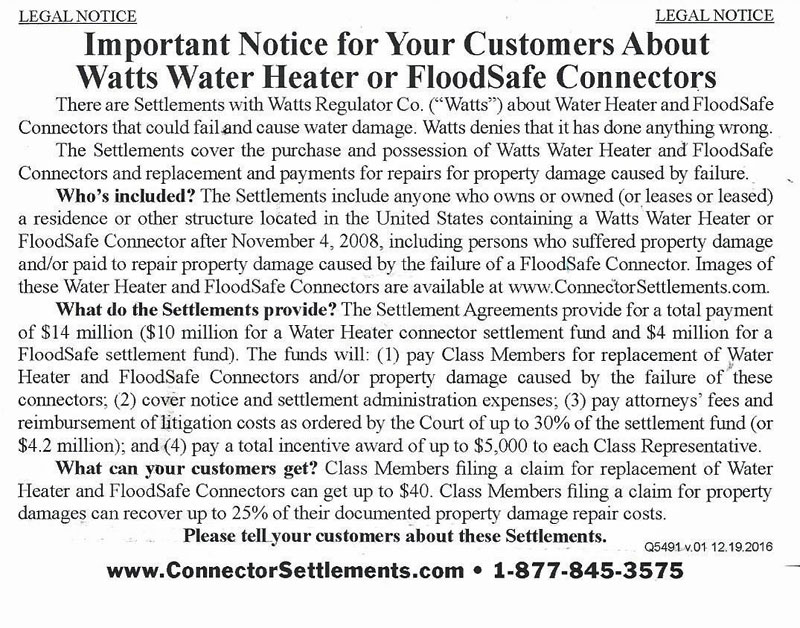 DIYourselfer said:
If I said "Made in China" would I be correct?
Click to expand...

What is it with this obsession?

The company that is selling it to you is responsible for the design specs, QA and most of the profits, yet you get obsessed about where it is made. Wake up and start asking the company whose label is on it why the quality sucks! Be it Watts selling poorly designed fittings or Mattel selling lead laced toys the responsibility rest squarely in the board room of these large corporations, US or other wise.

I used all PEX risers for my sinks and toilets. For the dishwasher I used 3/8 crimped 3/8 PEX. I hope this will last as long as copper would have. I gave up on the braided hoses after having one that was less than a year old leak.

I will not even bother looking at these for the washing machine. What a POS
Last edited by a moderator: Apr 30, 2015

Deja Vu!
I could've taken pictures just like that one month ago. It wasn't a Floodsafe (although I've been using 3 without incident for a couple years). I had installed a drinking water filter below the sink. It had integral push-in style tube o-ring fittings. I've used these for pneumatics for years. I even threw out the cheap tubing the kit supplied and used the nice 1/8" PEX hose made for refridgerators with the preformed compression end. Anyways, the collar in the fitting that holds the tube blew out. That little line sprayed all day to the tune of almost $30K.

Now that my joists are all open beneath I'm trying to think of the most reliable way to re-plumb. I'm leaning towards running 3/8" PEX (crimp-ring style) to a wall box with the angle valve behind the fridge. The other end will come all the up under the floor to the exposed plumbing under the sink. This way I have no buried connections. I really had gotten used to the big filter and want to do something like it again, preferably with threaded fittings; the outlet would tee off to the icemaker line and to a filtered water spout on the sink. I was looking to see if FloodSafe came as a threaded valve w/o the hose when I found this thread.

Any recommendations on my install? I am nervous as heck about ever having a line break again. What a miserable process.

Ultimately, I think it'd be wise for the insurance companies to fund the development of an affordable automatic shutoff. I envision a system of distributed water sensors in each bathroom, kitchen, utility room, etc, as well as a freeze sensor. Any sensor could trip a 1" shutoff valve on the supply line to the house. One valve for the house - no hose gimmicks. The valve would fail closed, which is to say that it must have power to be open. This could save SO much money. Does anything like this exist? Does it violate code in any way to install an automated valve on the supply line?

Maindish said:
Ultimately, I think it'd be wise for the insurance companies to fund the development of an affordable automatic shutoff. I envision a system of distributed water sensors in each bathroom, kitchen, utility room, etc, as well as a freeze sensor. Any sensor could trip a 1" shutoff valve on the supply line to the house. One valve for the house - no hose gimmicks. The valve would fail closed, which is to say that it must have power to be open. This could save SO much money. Does anything like this exist? Does it violate code in any way to install an automated valve on the supply line?
Click to expand...


I believe this might be a system similar to what you are talking about...
http://www.watercop.com/overview.aspx

I have not been able to find any information on whether anyone else has experienced a total failure with the Watts Floodsafe supply lines? This product was installed on my dishwasher in my newly built home, which has turned out to be a very bad idea. After a month of use the supply line broke between the compression fitting and the "floodsafe" shutoff valve. The compression fitting had been installed per the manufacturers instructions (hand tighten and 1/4 turn with wrench); which was confirmed when I removed it with a 1/4 turn and hand loosened. The insurance ajuster agreed it appeared to be a defect in the hose/construction.

As a result of the failure water filled the kitchen, master bedroom, dining room, living room, and unfinished basement. So far to date we are looking at approximately $15,000-$20,000 damage, more if we end up having to replace the custom cabinets.

If you had been a regular on this forum, you would have learned that this is all too common with the Watts Floodsafe lines. The problem is the entire product is worthless. Sad to say that this is just another lesson learned too late. I hope your insurance will come through for you.
You must log in or register to reply here.