Is this configuration compliant with IPC? I'm trying to stay within the joists to avoid needing to build out a box on the other side of the wall. 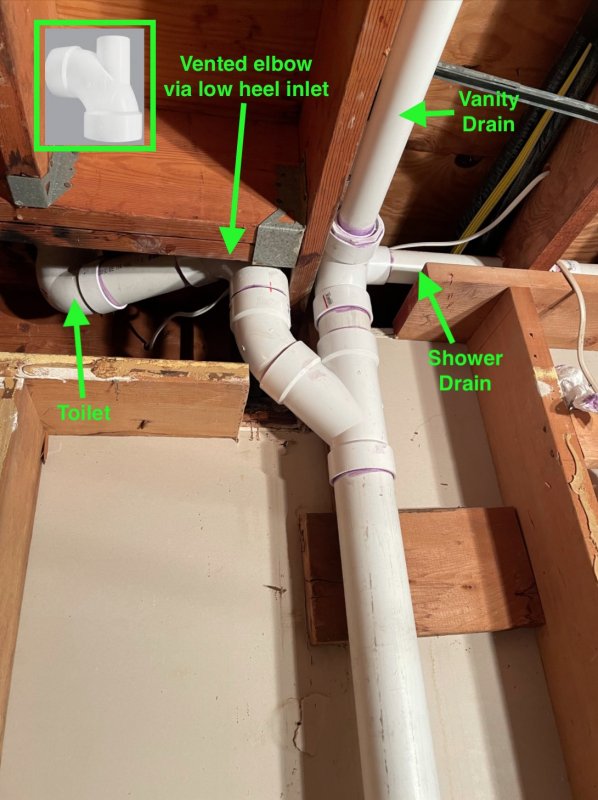 Yes, the orientation shown is the only use for a low heel quarter bend. It's basically just a 3x2x3 (or 3x1.5x3) san-tee with a different name for some reason. 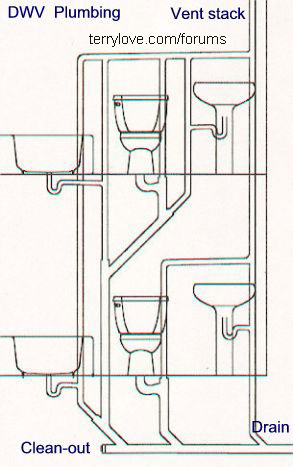 Thanks for the quick response! However, I decided to rip it out because I realized there wasn't enough room to line up the shower trap with the center line of the shower pan, newbie mistake. I need to move out the shower trap arm. Any one see any issues with this reconfiguration under IPC? I want to get it right this time before gluing everything up. 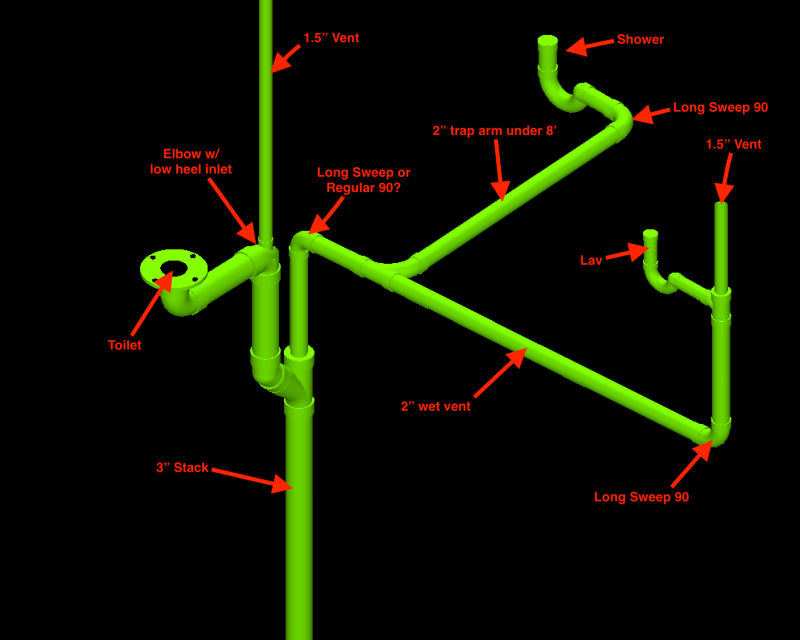 You can remove the question mark from the drawing.
You could get by with one roof vent if you wanted -- lavatory could wet vent the shower and the toilet. But two vents are great.

Note the shower trap arm 8 ft includes the path after the U and through the bend.

There's a joist in the way of the toilet connection that I don't want to cut, which requires me to join up to the stack lower (See picture in 1st post). That's why I have the second vent there for the toilet. I think a vent is required before any elevation changes right?

OGKris said:
I think a vent is required before any elevation changes right?
Click to expand...

Does not apply to a WC. It has an elevation change right off the bat as the fixture drain comes down vertically.

But more importantly, the purpose of the rule is to prevent a trap from siphoning, so it applies to the shower, for example. While a WC intentionally siphons and then refills its internal trap. So the WC is exempt from that rule.

The upshot is you're allowed to connect the WC lower on the 3" stack than the lav/shower, and rely on the lav to wet vent the WC.

Just to be clear, you're saying I can get rid of that elbow w/ low heel inlet and replace it with a regular 90 elbow and keep everything else as-is?

Yes, you could, the WC would be wet vented by the lav. [I guess there is a point of view that it wouldn't be allowed, not because of what the WC drain is doing, but because of the idea that a horizontal wet vent should stay horizontal, rather than turn vertical again. That doesn't make sense to me, and I don't think the IPC wording supports that interpretation.]

it would be nicer to come out of the wye (going upstream towards the WC) and stay at 45 to plumb until you're in the joist bay. That might make lining things up in plan a bit trickier, but it would eliminate quit some bends.

wwhitney said:
it would be nicer to come out of the wye (going upstream towards the WC) and stay at 45 to plumb until you're in the joist bay. That might make lining things up in plan a bit trickier, but it would eliminate quit some bends.
Click to expand...

I'll give it a try! Thanks Wayne.

OGKris said:
I'll give it a try! Thanks Wayne.
Click to expand...

Or you could easily just cap off the abandoned not needed vent , there are many millions of homes plumbed with a low heel outlet just as shown sure you can reconfigure it eliminate some bends but in reality you'll feel like its cleaner but this will work perfect and never have a problem guaranteed. Take your choice but there is no compromise in performance in the real world. I mean it looks glued to me ? so just need a cap why not?
You must log in or register to reply here.
Share:
Facebook Twitter Reddit Pinterest Tumblr WhatsApp Email Share Link
Top