Since I learned a lot reading this forum and asked some questions on a potential issue, I thought I would come back and post this review now that everything is installed.

The background - we were looking to replace two toilets. These were 3.5 gpf Kohlers installed 29 years ago when we built the house. What prompted this is a year and a half ago we had partially remodeled a second full bath with new cabinets, vanity, tile behind the vanity and paint. But the original rose colored tub/shower surround and toilet remained. I recently did some research on tubs that are refinished with epoxy paint, the longevity of this work, etc. We don't really use this tub / shower at all - I did this mainly for cosmetics and future resale down the road. After contacting a few pros in our area - with price quotes ranging from $725 to $2200, I hired one to change the rose colored tub / shower surround, tile bar and toilet roll niche from rose to white.

I also needed to have the toilet replaced and after doing some research, decided to also replace the black toilet in our master bath mainly because I wanted the higher universal height as we get older.

Initially I was planning on buying Kohler but in researching options, I stumbled onto this site and became convinced from doing research here and elsewhere to look at Toto. I ended up ordering a White Toto Entrada and a Black Toto Drake from Lowes (which said they would arrive in a week and 2 weeks respectively). Note, I checked and only one local supplier carried these and they had none in stock and did not know when they could get them. I had bought a black Toto SS-124 seat online in the interim as after watching it I noticed the price started to fall significantly each day. They only had 3 in stock and I guess their algorithm kicked in when they were not moving to drop prices til one sells. I had waited and when it finally had fell from $75.99 to under $50 I bought one - and the price on the remaining two immediately jumped back up.

Well after a month went by with no toilets and just delays from Lowes. I was frustrated. So I started looking online - but the Original Drake they had in back was selling for around $560 vs the $411 price on my Lowe's order. I looked at other options and they had a Black Drake II at $645 (one available). So I just decided to wait on Lowes more. But then one day the price on the Drake II fell a lot. And it went on like that day after day. Some pricing algorithm had kicked in dropping the price daily. I bided my time, taking the risk it would still be there and once it hit $388 I pounced. It arrived at my door 5 days later in perfect condition - no shipping damage. I then ordered a White Entrada for $158 and it was here in two days, also in perfect condition. Cancelled my Lowe's order and ended up with both toilets each at a lower price (and the one a step up getting the Drake II online vs the Drake from Lowes. I mention all that because I had read the cautionary comments about toilets being broken in shipping. But my experience was a positive.

I hired a plumber to install these as I thought there may be an issue with the water line needing moved for the Drake II - see this thread:

Turns out there was just enough room to install the Drake II without moving the water line. The plumber removed the old escutcheon and as you can see, it was a close fit but worked. He cut out a new escutcheon to blend in. On this one one small part of the flange was rusted but he was able to salvage it with a flange repair kit.

Alas, the toilet I though that would be easy to install, the Entrada, needed the whole flange replaced. It was rusted bad and neither flange repair kit he tried would work. So he had to cut out the old flange and install a new one. I guess the money I save on not moving the water line went to replace the flange on the other toilet.

Now that they are in, they both look great and flush extremely well. And the Universal Height is AWESOME. I very much recommend the higher height. I was a little leery about whether a 1.0 gpf would really do the job but it does. As my wife commented, they both flush more powerfully than the old 3.5 gpf units they replaced
Last edited: Nov 23, 2020 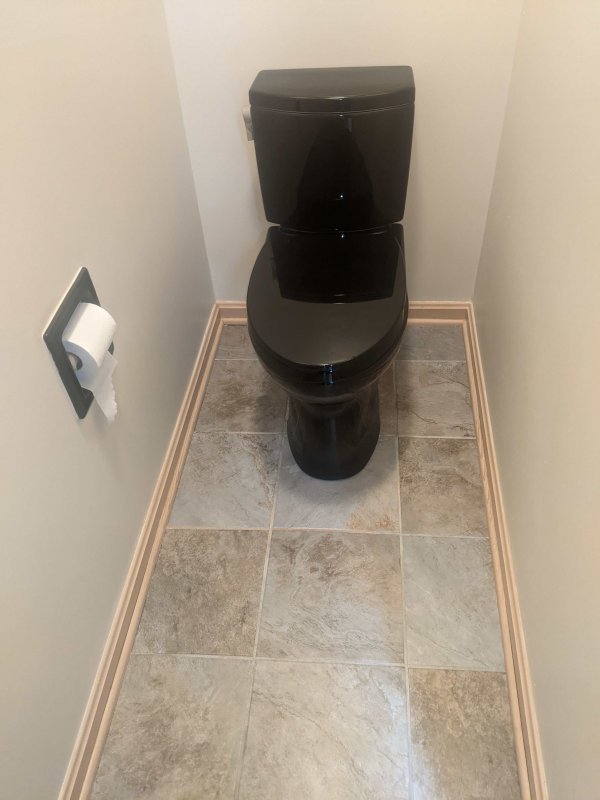 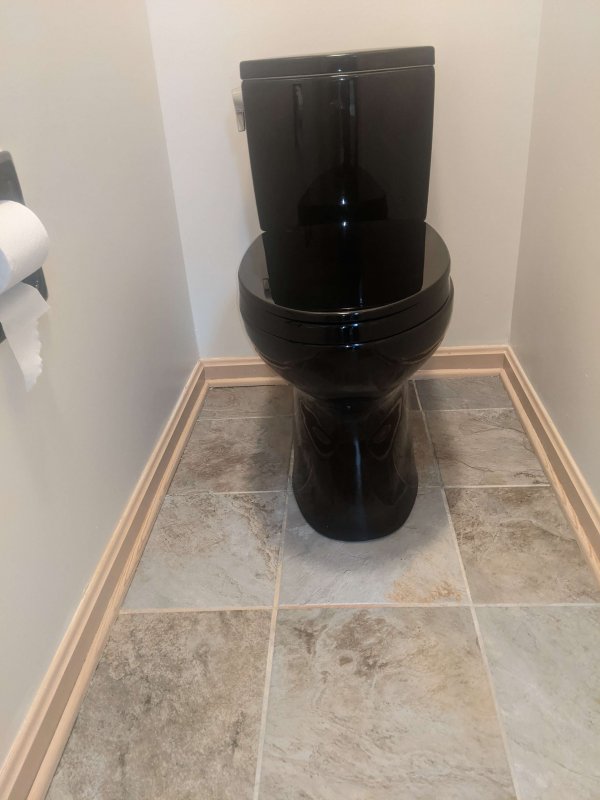 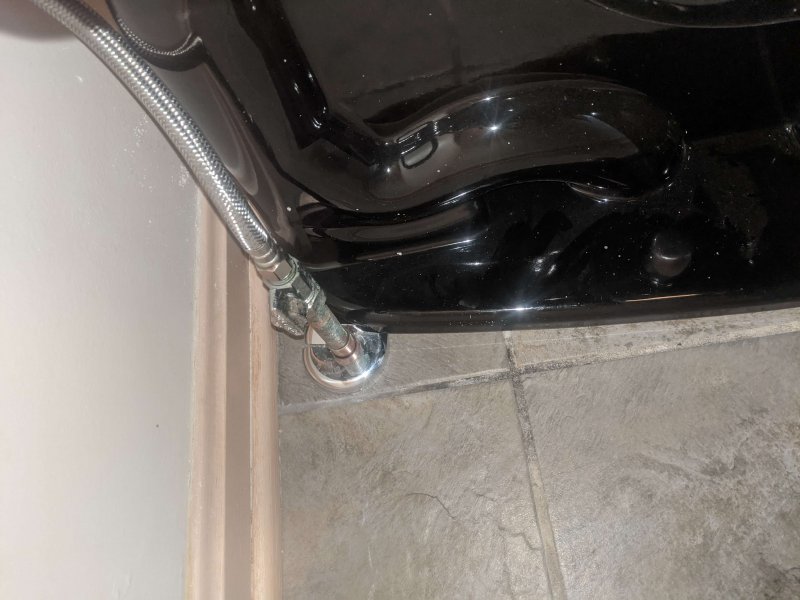 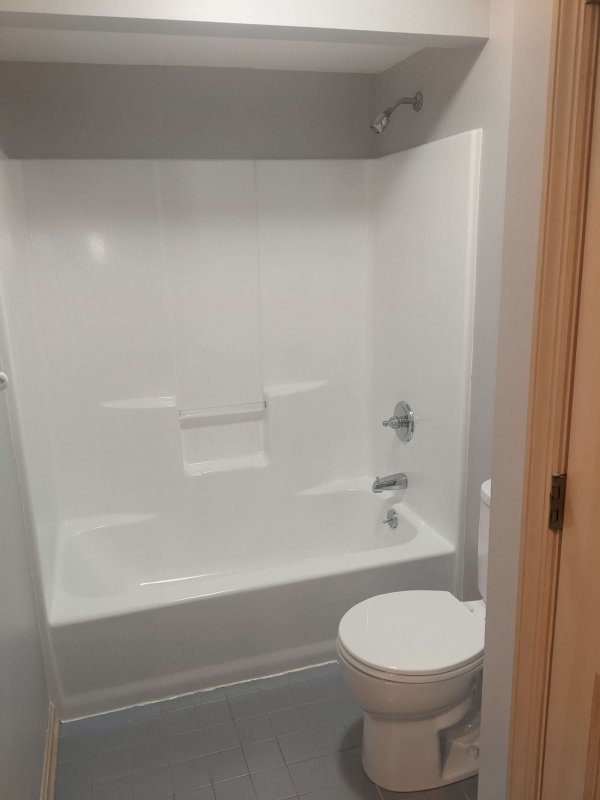 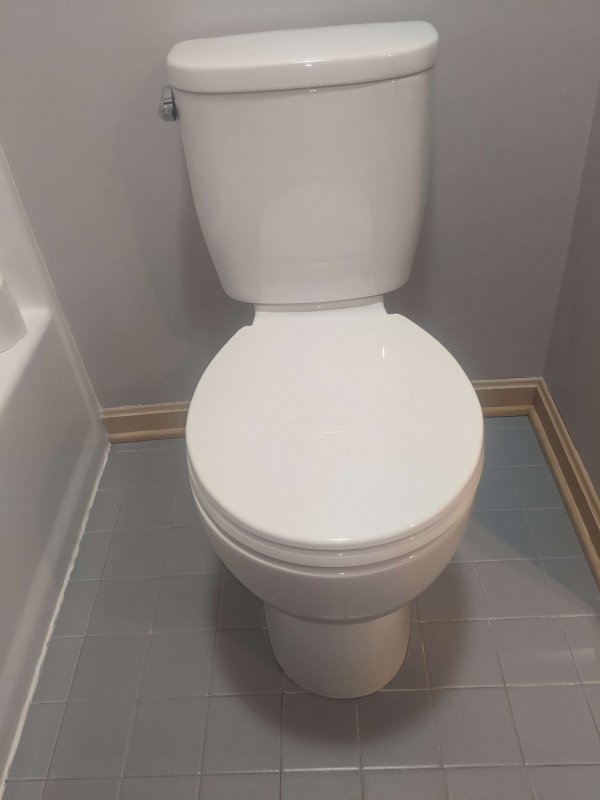 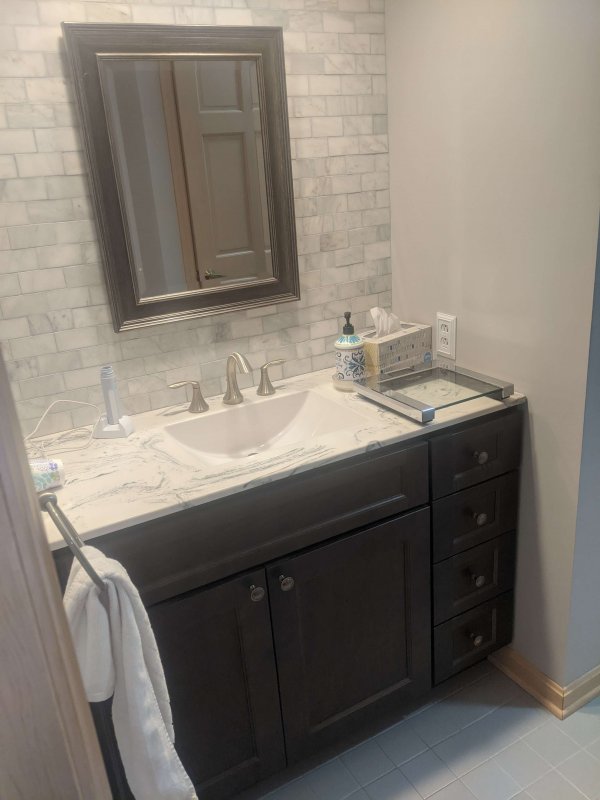 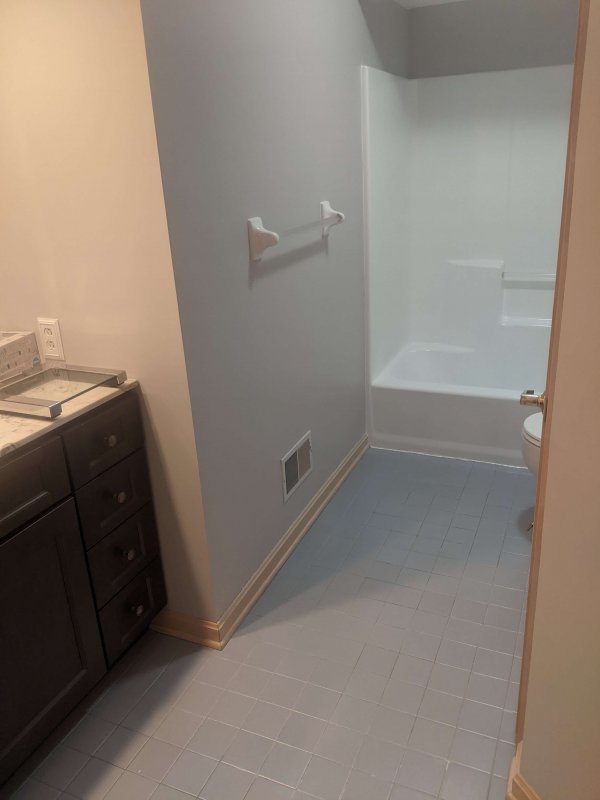 And here is the old Rose Colored Tub & Toilet 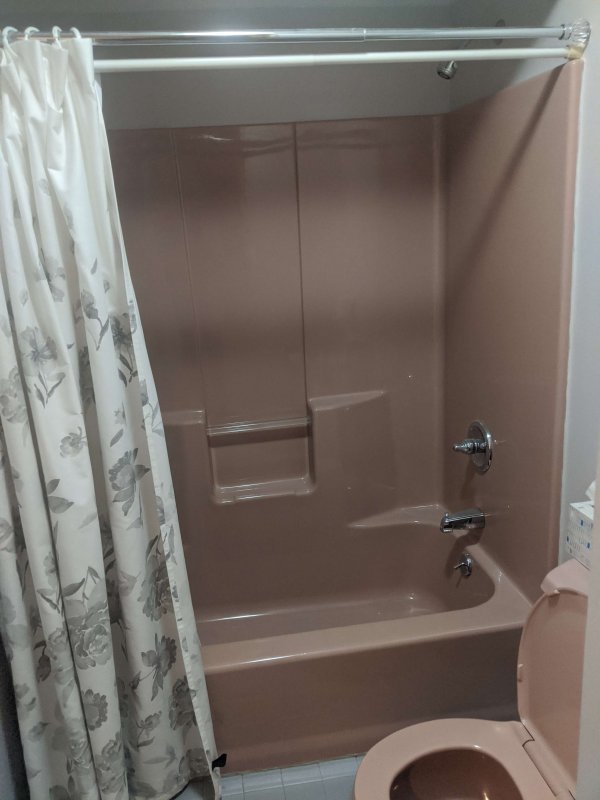 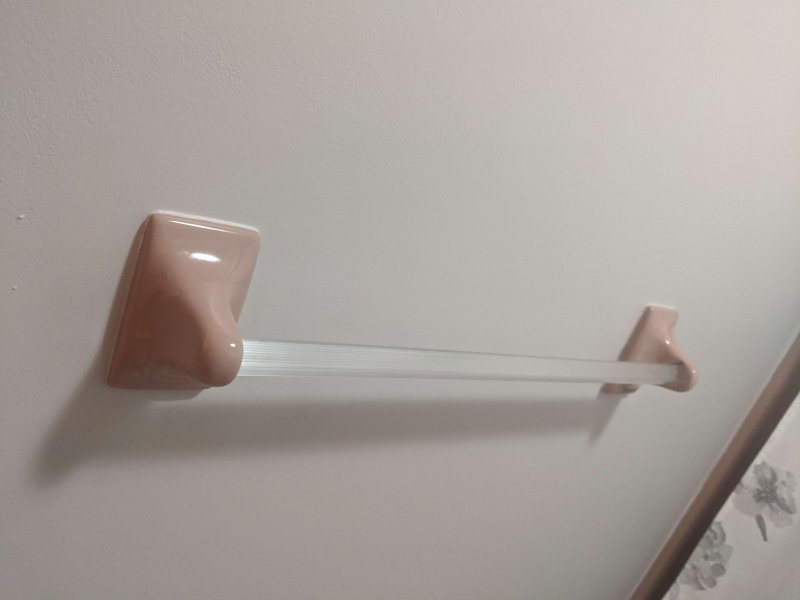 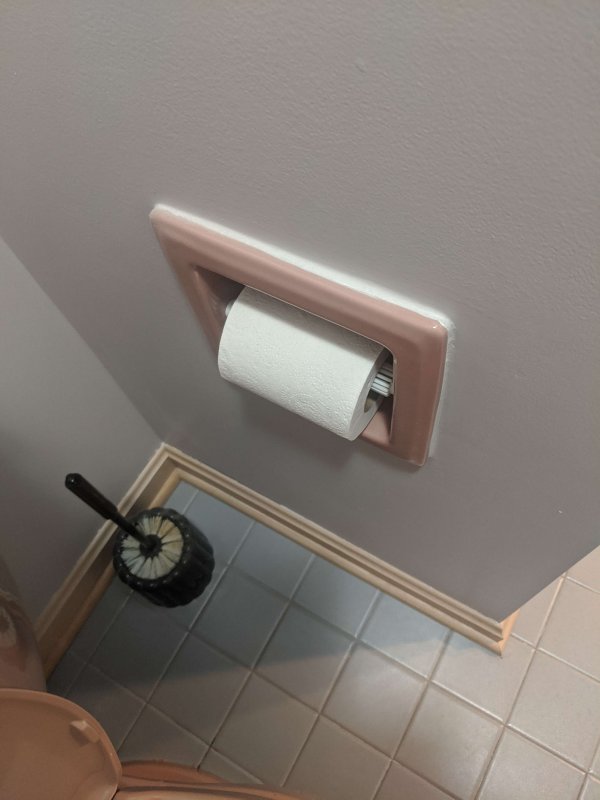 And this was the old black toilet showing the supply line and the old escutcheon that was removed. You can see the base of the Drake II sits back very close to the wall compared to this old Kohler 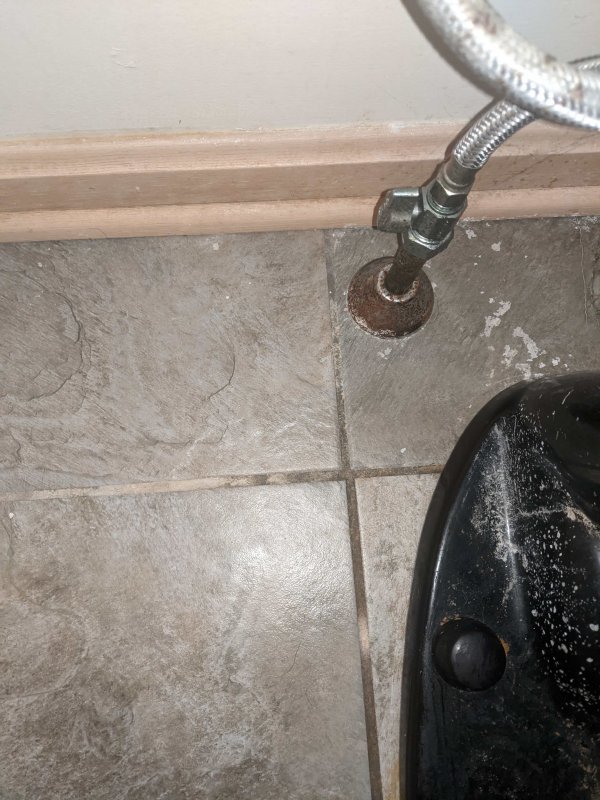 Drake 776 height with commercial style seat to be ADA compliant?

Toto toilet leak at wax base